As further proof that budgetary cuts are taking a toll on the U.S. Air Force, Maj. Gen. James Martin Jr.,... 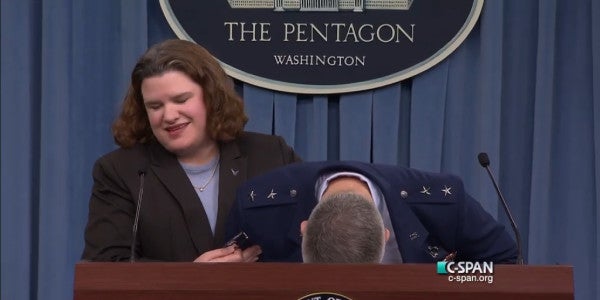 As further proof that budgetary cuts are taking a toll on the U.S. Air Force, Maj. Gen. James Martin Jr., the Air Force’s deputy assistant secretary for budget, fainted at the podium while discussing the F-35 in the Pentagon Press Briefing Room on Feb. 9. Without missing a beat, Martin’s colleague, the silver-tongued Assistant Air Force Deputy for Budget Carolyn Gleason quipped, “This is what the F-35 will do to you,” before picking up the brief where the good general left off.

Gleason was, of course, referencing the drama that’s engulfed the F-35 program since its conception, including spiraling costs, delays in production, and a 2015 report by the Pentagon's Director of Operational Test and Evaluation, which concluded that every F-35 that has been purchased so far “requires modifications prior to use in combat.” Most recently, on Feb. 9, a prematurely posted copy of the 2017 Air Force budget revealed that 45 F-35s would be cut from purchase plans over the next 10 years. That number is higher than what was previously expected.

As Martin slumped head-first into the lectern, several people rushed to his aid and escorted him out of the room –– but not before Gleason got in one more jab. “He kept threatening to pull a hammy,” she joked, “but I didn’t think he really meant it.” After a short stint in the hospital, the general reportedly walked out on his own and is now said to be doing OK. According to an NBC affiliate out of Columbus, Ohio, Martin was suffering from the flu or a cold. Think about that the next time you consider reaching for a Kleenex immediately after receiving the mandatory nasal flu vaccine.

You can watch the full video here: