Pilots, man. They get to wear those aviator glasses and do barrel rolls before they reenlist. 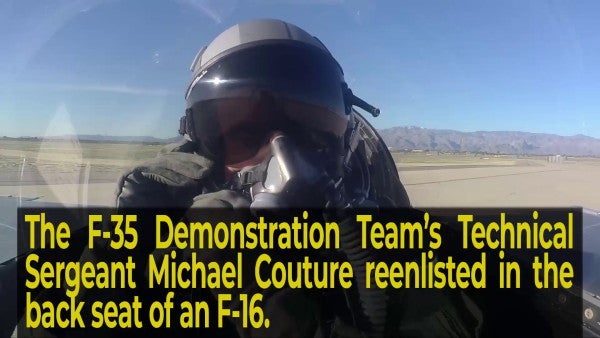 There have been reenlistments carried out underwater. With explosions in the background. And most infamously, perhaps, with dinosaur puppets (that one didn't work out so well for everyone involved).

All of those cases boil down to the traditional oath being administered by an officer who is standing right in front of the person re-upping for some additional time. But in a video made by Staff Sgt. Jensen Stidham out of Davis-Monthan Air Force Base in Arizona, that tradition was upended by the oath being recited over the radio in flight.

“You are an excellent leader on our team and I really appreciate that, and it is an honor as the F-35 Demo Team commander to reenlist you today,” said Capt. Andrew “Dojo” Olson to Tech Sgt. Michael Couture on Feb. 28, while flying alongside Couture in the backseat of an F-16 Fighting Falcon.

Originally from Burlington, Vermont, Couture first joined the Air Force in December 2011, and was first assigned to maintain the F-16C for the Vermont Air National Guard in his hometown, according to an official bio. He switched to working on the F-35A Lightning in 2016.

Zoomies, man. They get to wear those aviator glasses and do barrel rolls before they reenlist.

SEE ALSO: What Are The Weirdest Reenlistment Ceremonies You've Heard Of?