"There's a fine line between what is good for national security and regional stability, and our own pride." 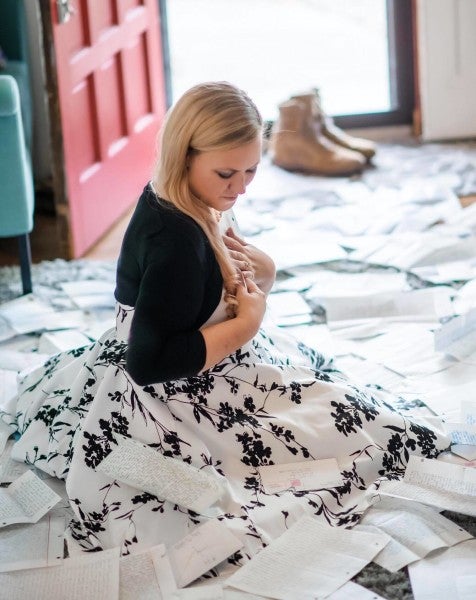 Rebecca Yarros, whose husband Jason is a soldier of 22 years, is done waiting for the forever wars to end, and not even $105,000 will change her mind.

Yarros is a blogger and an author who just recently released her 10th book, The Last Letter. She comes from a military family — both her parents are retired Army officers. And on February 21st, she published an open letter to the Army, explaining why she and her husband would be turning down his offer for a $105,000 bonus in exchange for three more years of service.

Long story short, she doesn't see the Army coming up with an exit strategy in Afghanistan any time soon. So she's using her own.

During her husband's first couple of deployments — he has five under his belt — Yarros was the “shiny, wear-the-unit-sweatshirt” Army wife, she wrote in her letter. She told Task & Purpose that there was an “air of excitement” during the first deployment ceremony, a “we've-got-this” kind of spirit. But that dwindled over the years, as the war dragged on and the deployments kept coming.

“When Iraq first happened, we never saw this coming,” Yarros told Task & Purpose. “And I don't think anyone does. And I think anyone who says, 'Well you knew what you were getting into' — I grew up in the military, but we never went through an 18-year war. This wasn't normal.”

If given the chance, Yarros said she would tell Army leadership that she understands military leaders are not politicians, and they can't decide to declare the war over. But the volume of deployments just isn't sustainable. She said leaders need to look at the number of divorces in Army families as “another casualty of what this 18-year-old war has done.”

Secretary of the Army Mark Esper's office did not return a request for comment from Task & Purpose.

And as for what she'd tell the politicians: “I would say there's a fine line between what is good for national security and regional stability, and our own pride. And that they're going to cripple their forces.”

Jason Yarros, an Army Chief Warrant Officer 3 who flies Apache helicopters, was seriously injured on his first deployment — and still agreed to deploy another four times. As Yarros wrote in her letter, they've been “cut down like the Giving Tree, and have nothing else to give.”

Her children, like so many others, have never known anything else. She told Task & Purpose that their oldest son was five-and-a-half-weeks old when Jason left for his first deployment. When the pair told their children that he would be deploying again, their second son joked, “Well does that mean I get to be the man of the house this time?”

Their oldest son responded, “Nope, that's been my job since I was six weeks old,” and walked out of the room.

The Yarros family is, unfortunately, in good company. The war in Afghanistan has been going on for so long that children who weren't even born on September 11th are now able to enlist. An entire generation of children don't know anything but a country being at war. And if you read the comments on Yarros' blog post, she is far from alone in feeling fed-up.

But the military knows how important it is to keep families happy. Support from a spouse is one of the key factors that helps the military retain troops, according to a 2017 DoD survey. That same year, around 21,290 of 689,060 married troops divorced, according to Military.com. And Yarros, in a moment of frustration after her husband told her about the bonus, threatened exactly that.

“I wasn't sure that I would not begin to resent him instead of his job, and there's a difference there,” Yarros said. “Once you resent the man, there's not a lot of coming back from that.”

Yarros wants the Army to know, however, that it hasn't all been bad. She said they've loved their time as a military family, and that they've “loved serving our nation.” She told Task & Purpose she would never tell anyone not to marry a soldier, and that she has no regrets. But after 22 years, it's time for her husband to come home.

“In a lifetime of war,” Yarros writes in her letter. “This man deserves peace.”

SEE NEXT: Veterans in Congress attack Trump's case for withdrawing troops from Syria and Afghanistan

WATCH ALSO: Trump Participates In The Celebration Of Military Mothers And Spouses