He was nearly killed by a Taliban RPG. Now he’s safe in the United States, and one of its newest citizens

"I'm a citizen of the greatest country in the world." 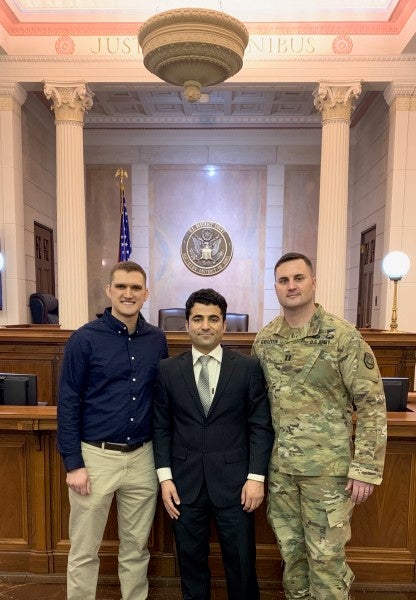 Nabi Mohammadi remembers the exact day he started the process to become an American citizen, because it was the same day an RPG almost killed him.

On April 29, 2011, Mohammadi — who worked as an interpreter for several U.S. Army National Guard units, but was working with the Iowa National Guard at the time — was coming back from “a big operation” when the truck he was in was hit by a rocket-propelled grenade, he told Task & Purpose. After towing the truck back to camp, he went to the room of his friend, then-Spc. Dalton Jacobus, to tell him what happened and that he wanted to get citizenship in the U.S.

“I told him, ‘Hey brother, this could have been the last day of my life,'” Mohammadi said. “‘You need to help me out to get to safety.'”

Jacobus agreed, and they immediately started working on Mohammadi’s paperwork. Jacobus told Task & Purpose they applied for Mohammadi to receive a special immigrant visa, but hadn’t heard anything as the expiration date on the application approached. So Jacobus filed a formal Congressional inquiry, and within weeks Mohammadi’s plane was touching down in Iowa.

Mohammadi’s story was first reported by the Des Moines Register.

Jacobus described Mohammadi to Task & Purpose as a “good man, a good friend,” and a “very warming presence when I was 19 years old, on a mountain top in Afghanistan.”

He said that although Mohammadi wasn’t the interpreter for his platoon, the two quickly became friends and continued to stay in touch over the years. When Mohammadi and his wife finally moved to the U.S. in 2013 — during which he said they lost their only two bags of luggage, and for a month had nothing but the clothes on their backs — they stayed with Jacobus’ parents for a time.

Capt. Patrick Hendrickson from the 1-168 Infantry Regiment, who led the platoon that Mohammadi worked for as an interpreter, told Task & Purpose that Mohammadi was his “sidekick for everything.” He called him one of “the hardest workers, most dedicated to his job that I’ve ever known.”

All it takes is one conversation with Mohammadi to see that that’s true.

Mohammadi worked as an interpreter for the Georgia, Vermont, Iowa, and Oklahoma National Guard on their rotations through Afghanistan, he told Task & Purpose. Now, he lives in Des Moines, Iowa, where he works a full-time job. He’s also a part-time student — soon to go full-time — working towards a Management Information Systems degree, a father to two young children (a five-year-old boy, and three-year-old girl), an Uber driver on the weekends after his family has gone to bed, the coach of his son’s soccer team, and a soccer player himself.

And on top of his other responsibilities, Mohammadi is also helping put his five siblings through school back in Afghanistan, he told Task & Purpose. His wife, who is also going to school and hopes to one day become a nurse, recently passed her citizenship test and they’re waiting to be told when her naturalization ceremony will be.

Both Jacobus and Mohammadi mentioned the Des Moines Catholic Charities, who Jacobus says helps “specifically immigrants and refugees” in the central Iowa area, and helped Mohammadi find a job, a place to live, and more.

Jacobus told Task & Purpose that Mohammadi has “a great support system … He’s got work friends, he’s got friends from mosque, he’s got his Army buddies, he’s got different groups of friends just like any old American now.”

Mohammadi said the day he became a citizen on March 1, he was “proud because I’m a citizen of the greatest country in the world, the country full of opportunities.”

As the Des Moines Register points out, applications for Afghans that have helped Americans troops “are delayed for years,” and Mohammadi told Task & Purpose that there are still interpreters in Afghanistan working to get U.S. visas. “They are not safe there…they need the help to get out of the country.” Mohammadi knows the dangers from experience — while working with the Oklahoma National Guard in 2011, he said the truck he was on was hit by an IED. The doctors told him he was lucky he wasn’t paralyzed.

Interpreters and their families are often targeted by the Taliban and others who see them as helping the enemy, as Vice News’ Ben Anderson detailed in 2014. One interpreter told Vice News that the Taliban views them as “spies for America. And now we are blamed for everything. … I can’t trust my neighbors. I can’t trust some of my relatives.”

“We cannot change the world,” Mohammadi told Task & Purpose. “But we can change the life of someone, and that could be like changing the world for that person.”