He was born in a village in Sudan. It took joining the Army to find his home

Seven years before he was granted U.S. citizenship at a federal district courthouse in Des Moines, Pfc. Fortytwo Chotper was learning English from American cartoons in a Kenyan refugee camp 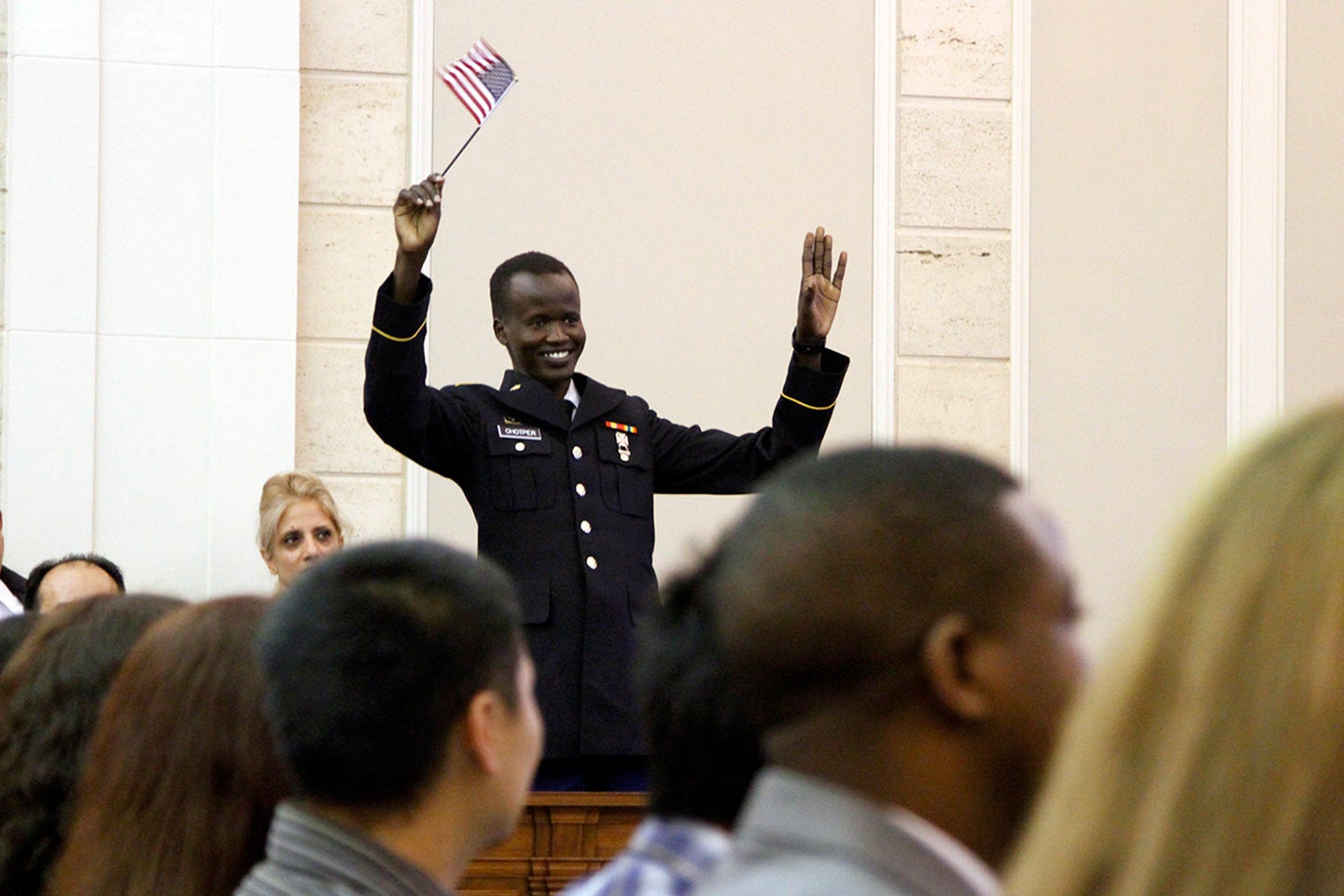 Seven years before he was granted U.S. citizenship at a federal district courthouse in Des Moines, Pfc. Fortytwo Chotper was learning English from American cartoons in a Kenyan refugee camp.

Born in Sudan as one of 13 children, his journey to the United States, the Iowa National Guard, and becoming a U.S. citizen was the result of hard work, determination and a desire to give back to the nation which had already given him so much.

Chotper knew when he first landed in Iowa that he wanted to join the U.S. military. When he met Brian and Samantha McClain at a college bookstore, it was all he could talk about.

“He said he wanted to do something that most Americans weren’t willing to do,” Brian McClain told Christie Smith in 2017, “because he was so grateful that he had the opportunity to come here.”

That process meant a lot of waiting, however — and seeking out plenty of help. The McClains, inspired by his sense of duty, put Chotper in touch with a local National Guard recruiter. That was when Chotper found out about accelerated citizenship, a program started during World War II and relaunched in 2009 that expedites citizenship after military service. It turned out to be an unexpected bonus.

“I wasn’t joining to get citizenship,” Chotper said. “I was just doing it to give thanks to the United States for bringing me here from the refugee camp.”

But applying for accelerated citizenship is no easy task. Soldiers are required to have a passport, a green card and a photo for the citizenship certificate, as well as the N400, a universal form for all citizenship applicants, and the N426, a military certification for the accelerated process. The application form is 20 pages and can be difficult to navigate, especially for someone completely new to the country.

Errors in paperwork wound up setting Chotper’s process back by several months, but that didn’t stop him from training and bonding with his Army National Guard unit, the 1168th Transportation Company, which supported him every step of the way.

Chotper once again found someone ready to help him: Sean Sejkora, an administrative specialist with the Alpha Company Recruit Sustainment Program at Camp Dodge in Johnston, Iowa, whose job focused on helping soldiers take care of their administrative requirements before they headed off for basic training.

Sejkora’s assistance was more than necessary: Without support from the military, the process of becoming a citizen can take years and cost hundreds of dollars, leaving the candidate in a vulnerable position. It’s an unnerving experience, but Chotper rose to the challenge.

“Without exception, I’ve been impressed with every single one of these permanent residents,” Sejkora said in a Defense Department story. “I’m very happy to have helped Chotper on his way, and I’d be happy to help many more.”

Finally, on October 6, 2017, Chotper arrived at the U.S. District Court of Southern Iowa, along with the McClains, Sejkora and 15 members of the Iowa National Guard, including Iowa Air National Guard Chief of Staff Brig. Gen. Randy Greenwood. All of them celebrated as Chotper raised his right hand, recited the Oath of Allegiance and became first in the room of 57 others to receive his citizenship.

Today, Chotper is a unit supply specialist with the 1168th Transportation Company. “I feel like I’ve become wholly American,” he said on the day of his citizenship ceremony, according to a DVIDS story. Not only that, he added, with a huge smile, but after all his persistence, service and commitment to the ideals of the United States, on that day, he felt like he could fly.