The Air Force deployed an unusual new system during a recent exercise: "robot dogs" designed to enhance the situational awareness of security forces during a mission 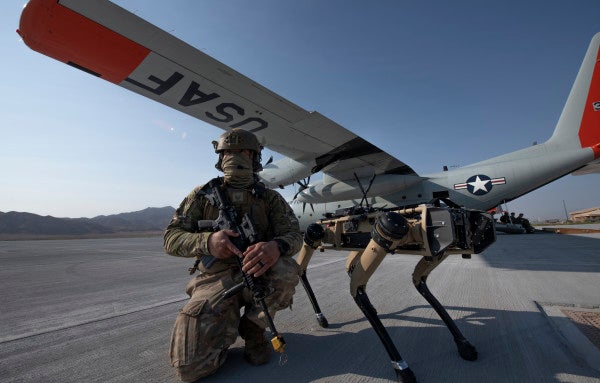 The Air Force deployed an unusual new system during a recent exercise: “robot dogs” designed to enhance the situational awareness of security forces during a mission.

The robot dogs — developed by Ghost Robotics as part of an Air Force Research Laboratory contract awarded back in April — were deployed last week to Nellis Air Force Base in Nevada as part of an agile combat employment exercise during which airmen scrambled to secure a simulated airfield against hostile attack.

The exercise, conducted by active-duty and Air National Guard airmen from across the United States, was designed to test the Air Force's next-generation Advanced Battle Management System, “a state-of-the-art system designed to provide combatant commanders the ability to control Department of Defense assets in real-time,” according to the Air Force.

“Beyond all-terrain stability and operation in virtually any environment, a core design principle for our legged robots is reduced mechanical complexity when compared to any other legged robots, and even traditional wheeled-tracked UGVs,” according to Ghost Robotics. “By reducing complexity, we inherently increase durability, agility, and endurance, and reduce the cost to deploy and maintain ground robots.”

The Vision 60 robot dogs provided visual assessments of the area while allowing 621st CRW airmen to maintain a tighter perimeter to the aircraft as the other supporting airmen arrived on the scene, according to CR team chief for the exercise and 321 CRS loadmaster Master Sgt. Lee Boston.

The exercise eventually saw a second C-130, an MC-130J Commando II, and four F-16 Fighting Falcons undergo rapid rearming and refueling on the ground while the robot dogs stood watch alongside security forces.

While details are scarce regarding the specific capabilities tested on the Vision 60 robot dogs during the ABMS demonstration, photos published to the Defense Visual Information Distribution Service show airmen from the 621st CRW operating with multiple variants of the platform — likely a testament to the modular design touted by Ghost Robotics.

“Our modular design even supports field swapping any sub-assembly within minutes,” according to Ghost Robotics. “Strategic partners can build solution-specific Q-UGVs for virtually any use-case with their choice of sensors, radios, and even size the robot to suit specific requirements by licensing our reference designs.”

For more details on the ABMS and how the Vision 60 robot dogs fit in, I highly suggest checking out this detailed analysis at The War Zone. In the meantime, here's a video of those robot dogs in action: