This is how mankind ends. 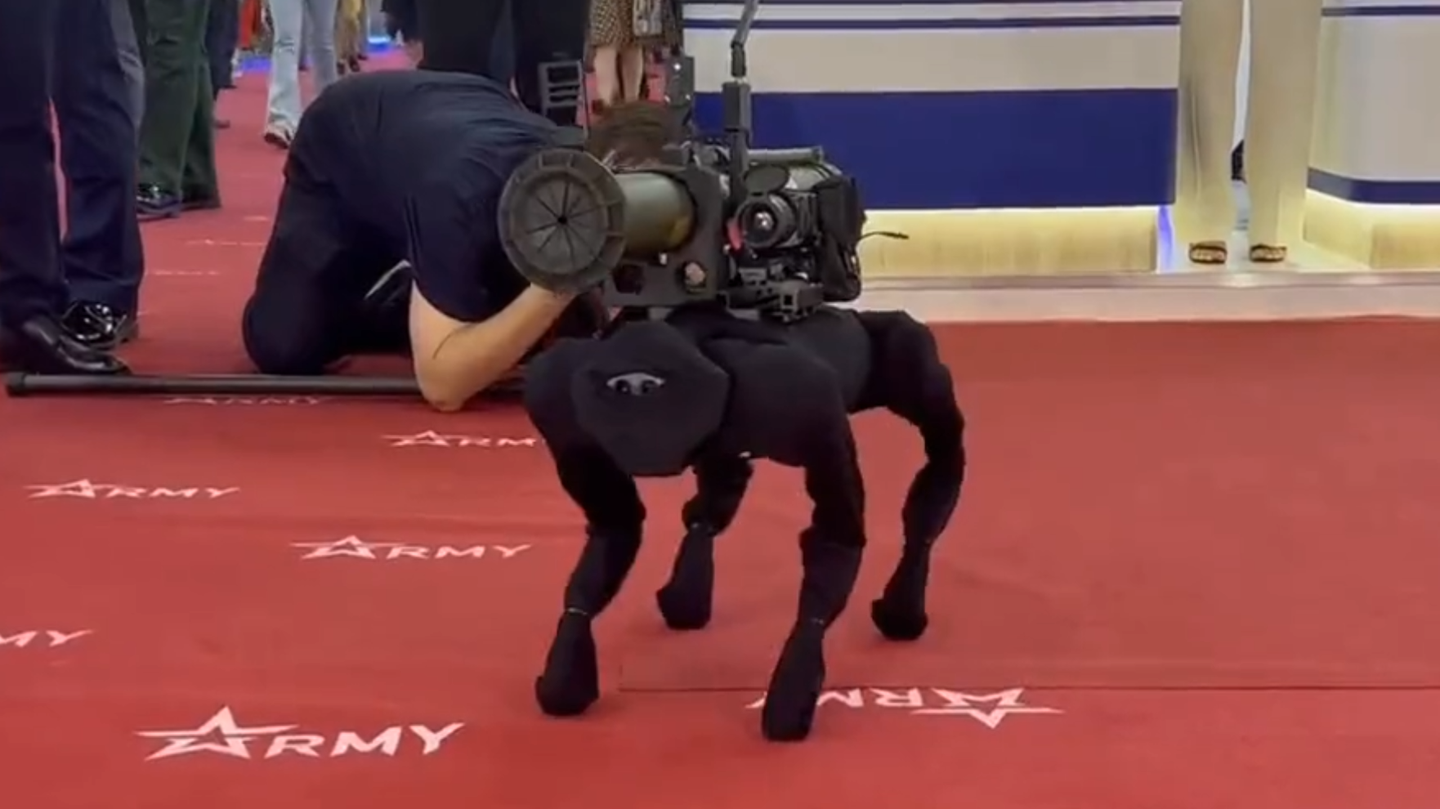 The M-81 robotic dog with a RPG-26 mounted to it on display in Moscow. (Screenshot via Twitter/RIA Novosti).
SHARE

When the robot apocalypse comes it will be on four legs and accompanied by calls of “good boy.” At least, that seems to be the route the world is heading in as more companies and militaries focus on the robot dog. Videos showcasing their improved movement, coordination and speed have been steady over recent years. Developers and militaries have praised their agility and potential usefulness on the battlefield.

Well now here’s a robot dog dressed as a ninja with a rocket launcher on its back.

The video, originally shared by state-run Russian news site RIA Novosti on Telegram, comes from the Army 2022 arms fair happening this week in Moscow. On its back appears to be an RPG-26, an anti-tank rocket launcher. The robot dog is an M-81, capable of both transporting weapons and firing them remotely. But wait, there’s more. RIA Novosti notes in its post that “for civilian purposes it can be used in the emergency zone for reconnaissance, passage through rubble and delivery of medicines.” That sounds wholesome. But does this look wholesome?

The all-black cloth outfit leaves all but cameras on the “head” concealed, giving off the vibe of a classic movie ninja, but with a rocket launcher on its back. The machine bounces and bounds on fast stomping limbs. Forget the rocket, the robot dog on its own is just terrifying. The explosive payload it bears is just an added bit of dread. Despite the clear lethality of such a creation, guests at the arms fair looked amused by the mobile anti-tank robot dog scurrying around the convention floor. Clearly it has not set in for them how creepy this can be.

There is an apparent reason for the concealing outfit though. The War Zone reported that the M-81 appears to actually be a commercially available Chinese machine that can be bought through Alibaba. That robot dog is capable of mounting machine guns though. The camera “eyes” match up with the Chinese device. So the robot dog might not be Russian, but the RPG-26 is.

Unnerving movements and stealthy outfits aside, armed robot dogs are getting more attention. In July photos emerged of a Ghost Robotics’ quadrupedal unmanned ground vehicles (Q-UGVs) with a Special Purpose Unmanned Rifle, or SPUR, mounted on its torso that can fire 6.5mm rounds, The War Zone reported. According to information from the trade show it was at, the SPUR can be remotely instructed to chamber rounds. These machines are not exactly big — the one on display in Moscow this week is dwarfed by humans — but their ability to serve as mobile weapons platforms is real, and clearly something developers and militaries are interested in exploring more. Robotic dogs are a technology that interests multiple nations, including the United States. As part of the Pentagon’s wider exploration into remote-controlled devices and uncrewed vehicles, the Air Force has been using its own robotic dogs to help with patrols.

UPDATE: This article was updated after publication to note the findings by The War Zone about the apparent Chinese origin of the robot dog.

There is some good news for humans afraid of these robotic roving weapons. Earlier this month Motherboard reported on hackers discovering that one model of robot dogs comes with a “killswitch” to turn off the machines. Hopefully the creepy ninja robot dog has a similar switch.