“I can definitely tell a difference; there’s a lot less pressure on my knees and I can feel the assist this system gives.” 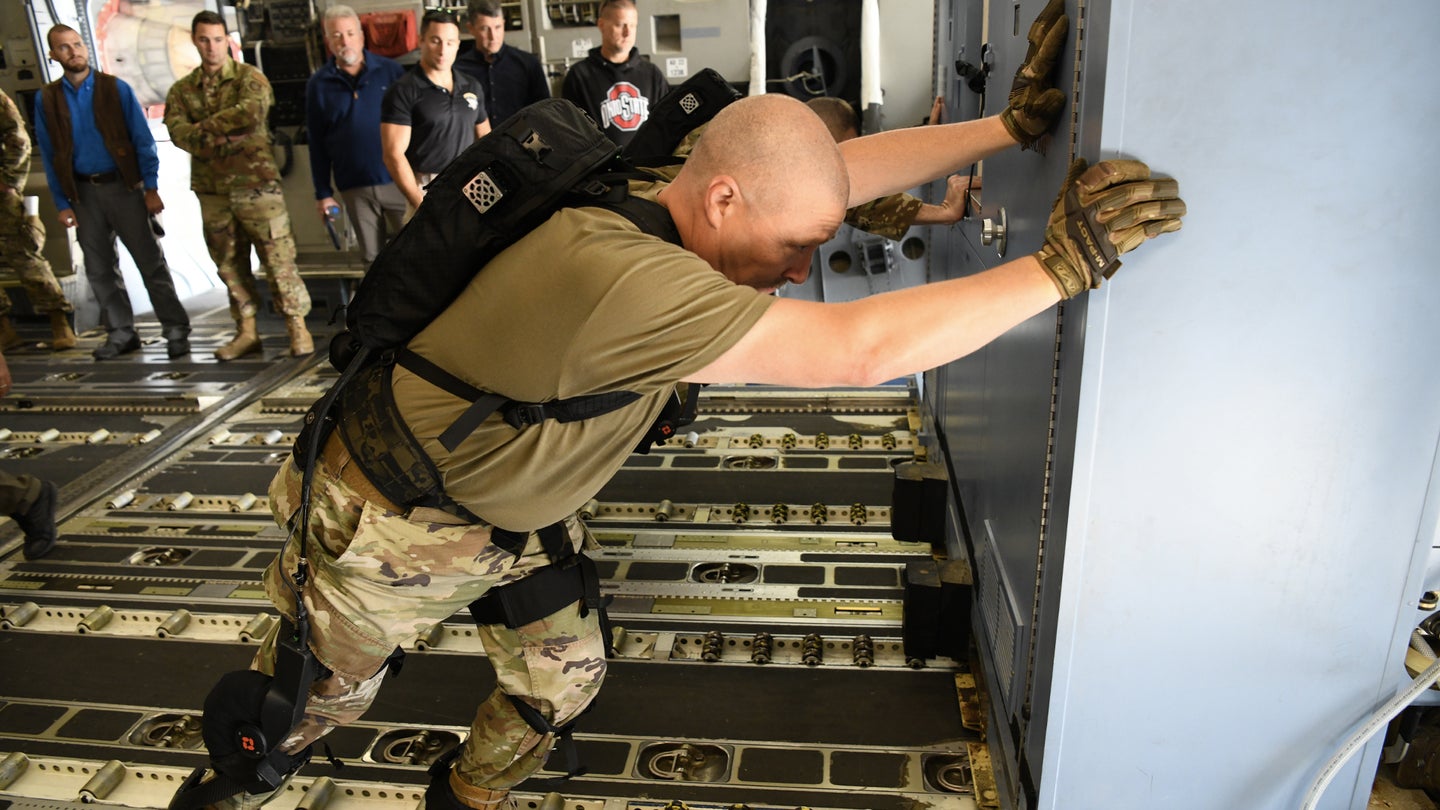 The Air Force often gets made fun of for being “the chair force,” but try telling that to aerial porters — airmen who strain their bodies to load up aircraft with everything from food and medical supplies to tanks and helicopters.

The aerial porters, also called “port dawgs,” play a key role in getting far-flung service members what they need to fight downrange, but moving heavy loads on and off aircraft all day in blazing heat or freezing cold can take its toll.

“Needless to say, the aerial porter career field sees its share of injuries — acute as well as long-term — that can sometimes force them out of the career field and sometimes even out of the service,” wrote the Air Force Research Laboratory in a press release last week.

But a new technology in the works could make the art of aerial portering safer and more effective. Earlier this month, two aerial porters with the 87th Aerial Port Squadron at Wright-Patterson Air Force Base, Ohio tested out an exoskeleton design that “augments leg strength to reduce fatigue, increase endurance and offset weight,” wrote AFRL.

Apparently, the exoskeletons turned the port dawgs into camouflage ants capable of moving multiple times their body weight. Two port dawgs from the 87th, Chief Master Sgt. Sean Storms and Senior Master Sgt. Brian Anders, moved a pallet weighing about 3,500 pounds, a load that usually requires four or five people to move, the Air Force explained. Plus, the ranks of chief master sergeant and senior master sergeant are two of the highest enlisted ranks in the branch, so these two airmen may not be spring chickens just out of high school.

“I can definitely tell a difference; there’s a lot less pressure on my knees and I can feel the assist this system gives,” said Storms.

If just two airmen in exoskeletons can move that much weight, imagine what a squadron full of them could do. That’s the vision which John Florio, the deputy director of AFRL’s Center for Rapid Innovation, hopes Air Force planners will share.

“If this is optimized for the aerial porters’ particular missions, it is going to mean that teams will be able to load heavier objects on aircraft much faster using less people, which equates to saving the government and taxpayer money,” Florio said in the press release. “But the biggest game changer for the Air and Space Forces is less injuries to personnel, which can lead to longer careers.”

Loading a C-17 cargo jet is not the same as helping your buddy move into their house. It’s much more intense.

“If you’ve ever loaded anything in an office or maybe at home like a refrigerator — anything like that is small compared to what our aerial porters are loading,” Florio explained. “For them, we’re talking about large pieces of cargo going into a large aircraft. So knees are under stress; ankles are under stress; backs are under stress; muscles all over the body are under stress. I’ve talked to a lot of the people here in the maintenance squadron, and chronic injuries are rampant all over this particular career field and in other related fields too.”

The specific exoskeleton design tested earlier this month is called the Forge System, produced by ROAM Robotics. The system has a backpack carrying a pneumatic device “that converts air pressure into useable torque on the body,” according to ROAM’s website. That power then moves to braces on the user’s legs, which “aid in power transfer while providing stability and support to the user’s knees.”

After Storms and Anders used Forge to move a 3,500-pound pallet, others tried the system while pushing a weighted sled, doing squats in the gym, or climbing stairs while carrying weights. If the Air Force adopts the system en masse, it could be put to plenty of creative uses.

“I can see additional uses for this pneumatically-powered exoskeleton, primarily in aeromedical evacuation missions where our medical personnel are lifting large litters of sick and injured warfighters into the back of aircraft,” said Brig. Gen. John Andrus, commander of the 711th Human Performance Wing, in the Air Force press release. “We have to think about the safety of our medical personnel, but also the safety of those we are treating and evacuating out of harm’s way.”

Forge is not the first time the U.S. military has tried using exoskeletons to lighten the load. In May 2021, the Air Force worked with Arizona State University to test exoskeletons at Travis Air Force Base, California. After a month of testing, Travis airmen gave the suits a thumbs-up.

“This suit’s core function is to help us lift, but can also be used in other ways,” said Airman 1st Class Kyle Sunderman, a ramp serviceman with the 60th Aerial Port Squadron, in a press release at the time. “During a load, fatigue can be a real issue and these exoskeletons really take a lot of the strain away.”

“There are small things here and there where the suits can be improved to make them more user friendly,” said Airman 1st Class Xaviar Archangel, a fellow aerial porter with the 60th APS. “But there is no danger and these suits don’t have the strength to overpower the user, so I feel completely safe in it.”

The Army has also explored using exoskeletons. In August, soldiers with the 101st Airborne Division used an unpowered exosuit called SABER to lighten the load during an artillery exercise. The gear was well-received.

“Over the course of the day, lifting 60-pound rounds you get worn out, especially after hours. It takes a toll on your body,” said Pfc. Dale Paulson, of the 101st Airborne Division, in a press release at the time. “Wearing the suit really helped a lot, especially with getting the rounds out of the back of the truck. It felt like it gave me an extra boost. I didn’t have to work as hard. I feel like it helped me move quicker.”

Though sci-fi fans might hope to see exoskeleton-wearing commandos flinging enemies across a room like frisbees, powered exoskeletons may pay off greater dividends in the rear with the gear.

“The weaponized, sci-fi-sexy version is always going to get more attention, but the logistics side has always had an actual commercial equivalent driving it forward,” Peter Singer, a strategist for the New America Foundation and author of the novel Ghost Fleet, told Task & Purpose in 2020. “There’s always been that R&D work related to the construction field and other private-sector projects, and that’s what we’re still drawing on. We’ll end up seeing this in non-combat applications first.”

Plus, in an era where the military is struggling to meet its recruiting goals, exoskeletons may prevent the services from losing prized troops to musculoskeletal injuries. At least, that’s what Florio hopes to see.

“The opportunity to have something like this exoskeleton, that provides a capability that augments the aerial porter’s strength, that takes pressure off joints, that makes their muscles work more efficiently, and in the long run, that prevents overuse injuries — well, it’s going to be a game changer,” he said.