The Air Force’s latest challenge: getting 2 Dodge muscle cars across the Atlantic to help U-2 spy planes land

A squadron of airmen are currently grappling with an unusual task: sending a pair of Dodge Charger chase cars from their current home in New Jersey to the United Kingdom to help U-2 Dragon Lady spy planes land safely 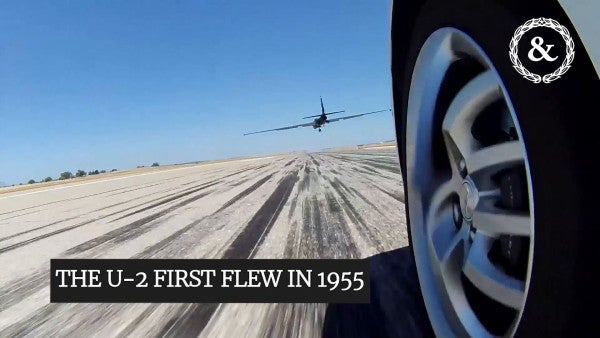 A squadron of airmen are currently grappling with an unusual task: sending a pair of Dodge Charger chase cars from their current home in New Jersey to the United Kingdom to help U-2 Dragon Lady spy planes land safely.

The Air Force announced last week that personal at 305th Aerial Port Squadron at Joint Base McGuire-Dix-Lakehurst are currently working to certify a pair of chase cars and a transportation truck for overseas transport to Royal Air Force Mildenhall — a time-consuming (and apparently unexpected) process that ensures cargo can be safely transported by aircraft.

Chase cars are employed to assist the spyplanes during takeoff and landing given both the aircraft's unique design and the limited peripheral vision of U-2 pilot pressure suits. Why RAF Mildenhall couldn't fine local alternatives remains unclear.

A 99th Expeditionary Reconnaissance Squadron U-2 Dragon Lady pilot drives a high-performance chase car on the runway to catch a U-2 performing a low-flight touch and go at Al Dhafra Air Base, United Arab Emirates, Mar. 15, 2019
(U.S. Air Force/Senior Airman Gracie I. Lee)

“The chase vehicles we received have no Air Transportability Test Loading Agency certification,” 305th APS load planning supervisor Staff Sgt. Ryan Murray, said in an Aug. 21 Air Force news release.”They have no fixed area to be restrained or tied down in the aircraft, so there's no black and white way on how to transport them.”

“When they arrive to our area like that, they are deemed non-airworthy and that's when we have to figure out how we can load them safely or we may have to make the call that we can't load it,” he added.

This isn't just a matter of measuring the cargo. Personnel from the 305th APS have to coordinate with ATTLA at Wright-Patterson Air Force Base in Ohio to actually translate the data into a certification that ensures the transportation process doesn't damage both the vehicles and the C-17 Globemaster III or KC-10 Extender aircraft that, according to The War Zone, are the likely choices to ferry them overseas.

“We have to do a full inspection of the vehicle to see how much weight is on each individual tire, both axles weighed together, the total weight of the vehicle, ground clearance and check the overhang on the front and rear of the vehicle to see if it can go up an aircraft ramp or not,” Murray said. “Once we have those measurements, an ATTLA engineer takes the info to create a certification on how to move that cargo.”

The risk of shifting cargo is no joke. In 2015, the National Transportation Safety Board determined that the crash of a Boeing 747-400 plane just after takeoff from Bagram Air Base in Afghanistan occurred after an Mine-Resistant Ambush Protected (MRAP) broke free of its restraints and plowed into the aircraft's hydraulic systems. Six crew members were killed.

And this isn't just a complicated lift, but a relatively costly one: As The War Zone points out, using a C-17 or KC-10 to lug a pair of chargers across the Atlantic could cot the Air Force as much as $190,000 just to get the vehicles RAF Mildenhall. Wouldn't it be a bit cheaper to simply source a similar vehicle from the unit handling U-2 operations at RAF Fairford?

Maybe! There is another crew that could do it cheaper — or should I say, a family: