"It was heartwarming to see." 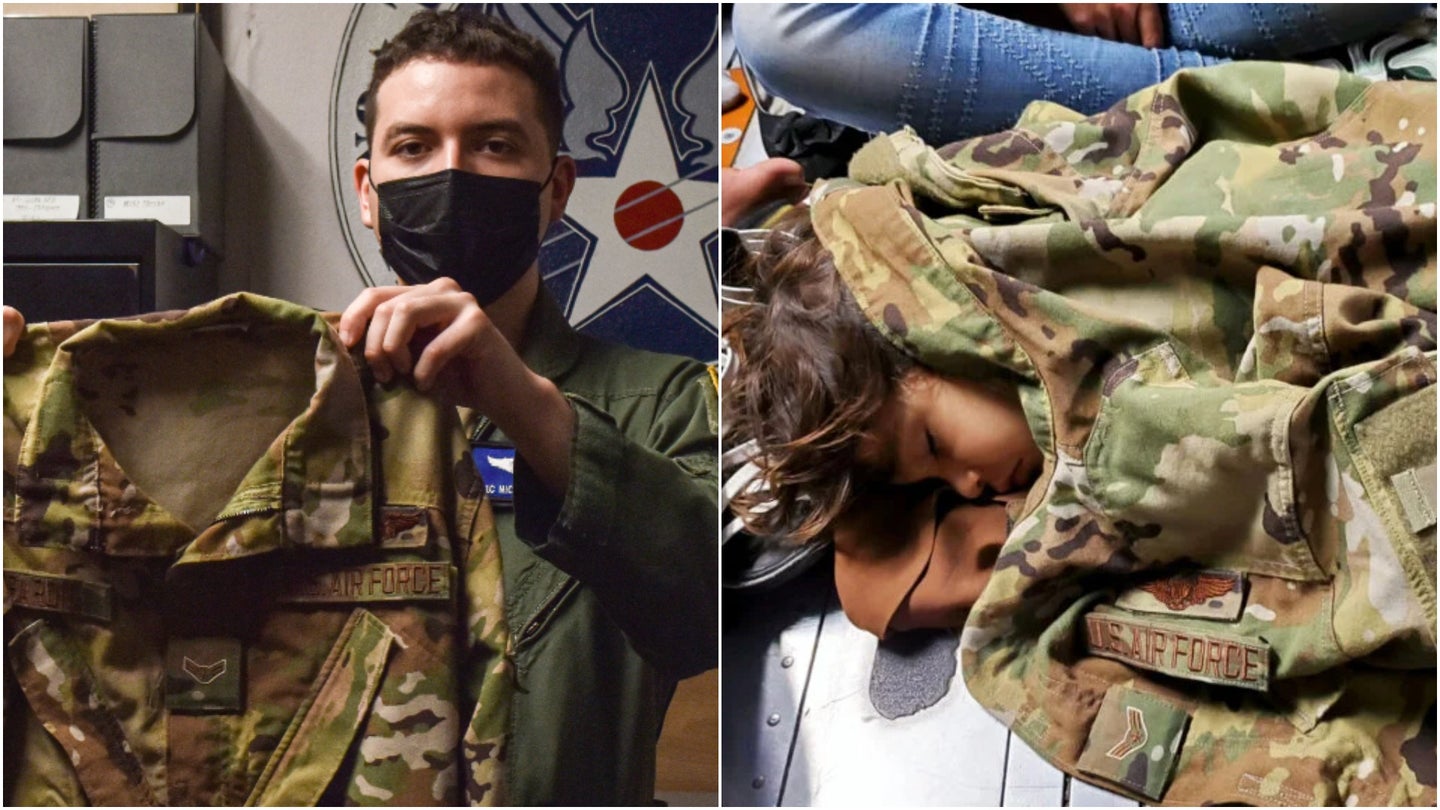 A junior enlisted airman is donating his uniform top to a museum after a famous photo showed an Afghan child using it as a blanket while sleeping on the floor of a C-17 Globemaster III transport jet.

Airman 1st Class Nicolas Baron has been in the Air Force only two years and was serving as a loadmaster on a C-17 on Aug. 15 when it carried a record 823 people out of Kabul during Operation Allies Refuge, the military’s name for the airlift out of Afghanistan this summer.

“I was just doing what I had to do,” Baron said in a recent Air Force news release. “Making sure everyone was seated and safe. My blouse had fallen from where I’d hung it up and as I was focusing on my tasks, a mother picked it up and laid it across her child to help keep them warm. It was heartwarming to see.”

A photo taken of the child wearing the top immediately went viral across the internet. Now, two months later, Baron is donating the blouse to the National Museum of the U.S. Air Force at Wright-Patterson Air Force Base, Ohio, which is collecting artifacts documenting Operation Allies Refuge. During the operation, the Air Force helped evacuate 120,000 Americans, Afghans and other allies out of Kabul, often in the cargo holds of C-17s like the one Baron worked on.

Baron and his fellow crew members helped set the tone for the operation early on when they crammed 823 people aboard their aircraft, a high-risk task considering the C-17 is supposed to carry only 400 people at a time.

“I hope they’re recognized for it, because that’s a gutsy call, and they made the right one,” one C-17 pilot told Task & Purpose about Reach 871, the call sign for the heavily-loaded C-17. 823 passengers “is just an incredible amount of people to have on a jet,” he added.

Reach 871 was just the start of two weeks of near-nonstop flights by the Air Force’s Air Mobility Command to haul people out of Afghanistan. The command committed more than 230 aircraft to the effort, including C-17s; C-5 Galaxies; KC-10, KC-135 and KC-46 tankers; and C-130 turboprop transports. At one point, more than half the service’s fleet of 222 C-17s were involved in the operation, along with more than 400 air crew members from across the service.

“In terms of scale, this was an all-hands-on-deck operation,” AMC spokesperson Capt. Christopher Herbert told Task & Purpose in September.

In some cases, C-17s would land in Germany or Qatar with more people than they’d taken off with. At least three babies were born amid the evacuation, and one was named “Reach” after “Reach 828,” the call sign of the C-17 she was born on.

“When I look back on why I chose the C-17 in pilot training, it’s this defining moment that comes once in a generation that makes the long stretches of being tired, of being stretched to the limits worth it,” one C-17 pilot told Task & Purpose in September.

The world took notice of the Air Force’s hard work during the operation, which represented a bright spot in the middle of the desperate final days of America’s 20-year war in Afghanistan. Before the operation had even ended, curators at the Air Force museum were already looking for artifacts to document it, according to Stuart Lockhart, historian for the 305th Air Mobility Wing, where Baron is based.

“One item that they mentioned in particular that they wanted, was [A1C Baron’s] blouse,” Lockhart said.

At first glance, the blouse looks like any other operational camouflage pattern blouse worn by today’s airmen. But the photo of the Afghan child wearing it as a blanket makes it so much more.

“In the early phases of this operation all that we were hearing on the news was how bad the situation was,” Lockhart said. “And then to have this touching image come out of just a simple humanitarian gesture, it made such an impression on our country and our world. It’s absolute gold.”

It means a lot to Baron, too. A native of south Florida, the airman joined the Air Force in November 2019 with the goal of being part of something bigger. Now, the blouse bearing his name always will be.

“I think the blouse [gives a sense of] hope no matter who they are or where they’re from,” he said. “It makes me feel proud [of our mission] and of the crew.”