What contraption expertly combines the lethality of the modern American soldier with the awkwardness of a mall cop of a flock of tourists? If you answered 'a tactical Segway,' then you are absolutely correct 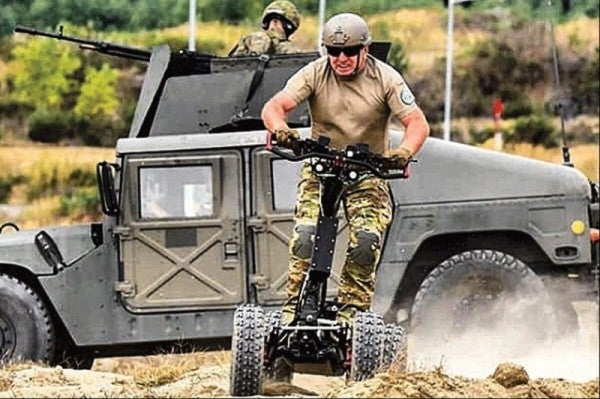 What contraption expertly combines the lethality of the modern American soldier with the awkwardness of a mall cop or a flock of tourists? If you answered 'a tactical Segway,' then you are absolutely correct.

The Army is currently testing out a slew of new tactical-level gear as part of its annual Army Expeditionary Warrior Experiments at Fort Benning in Georgia, and the service's weird tech of choice this year includes the EZ RaiderHD4, a four-wheeled scooter that looks like a Segway on steroids.

Here's a video of the EZRaider in action:

The 280-pound EZRaider, which Army Times more politely describes as “a scooter-like ATV,” can carry up to two soldiers at a time and can operate either with soldier steering or semi-autonomously and can fold in on itself for easy transport and storage.

While the EZRaider comes in a two-wheeled variant, Army documents appear to indicate that soldiers are currently testing out the four-wheeled version during the force-on-force experiments that are currently under way at Fort Benning.

More importantly, it looks like a ruggedized version of the Bat-Segway that Paul Blart rocks in the must-see comedic masterpiece Paul Blart: Mall Cop 2.