The light helicopter that went missing from Fort Hood over the Martin Luther King Jr. holiday weekend actually wasn't missing after all 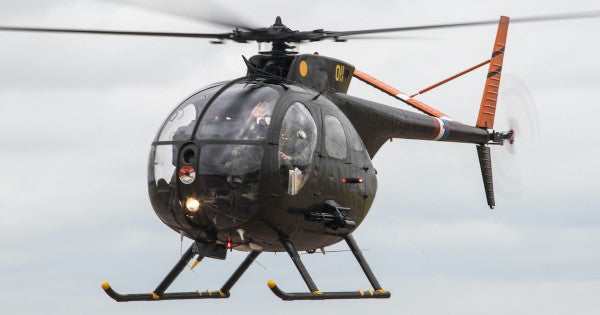 The light helicopter that reportedly went missing from Fort Hood over the Martin Luther King Jr. holiday weekend wasn't actually missing after all.

The Vietnam-era OH-6A Cayuse (apparently confused for an MH-6 Little Bird) was initially reported stolen last week after it disappeared from its normal static display at the Texas military base, prompting a series of frantic social media posts in search of the aircraft.

Help this LT find his missing Little Bird. from r/army

As it turns out, the Cayuse hadn't been stolen, per se: a brief investigation by Army Criminal Investigation Command revealed that the helicopter had simply been moved elsewhere for regular maintenance.

“The out of service, demilitarized, display helicopter was initially reported stolen, but after further investigation, it was determined that the OH-6A was not stolen and was never out of Army control,” CID spokesman Chris Grey told Army Times.

“It was moved from one brigade to another to execute a contract to repaint the helicopter for future display.”

Indeed, a photo on Reddit/s r/army forum appeared to show the errant helo strapped to the back of a flatbed truck elsewhere at the base.

Little Bird has been found from r/army

“Someone stole this from the museum area and the truck, now it's locked away in here under CID investigation,” the caption reads. “Fucking Fort Hood.”

Sure, it's likely that this was just the result of a big miscommunication, but the jokes basically write themselves: