The U.S. Space Force has a name tape for uniforms now. Get excited people. In a tweet from its official... 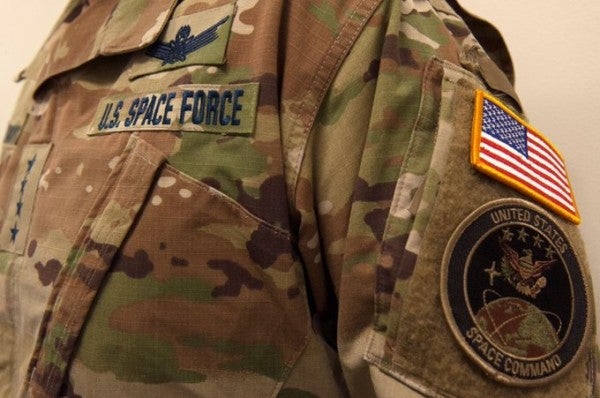 In a tweet from its official account, the Space Force said its uniform name tapes have “touched down in the Pentagon,” sharing a photo of it on the chest of Gen. John W. Raymond, the newly-minted Chief of Space Operations for the new service branch nested in the Department of the Air Force.

As some Twitter users pointed out, the name tape is new but the uniform is not. Ranger Up CEO Nick Palmisciano pushed for a zip up coverall or Lycra design, while Oriana Pawlyk, a Military.com reporter, suggested capes, which this reporter fully supports.

I mean, can you imagine the possibilities?

In a follow-up tweet, the Space Force explained that it was using current Army and Air Force uniforms so that members would look like the joint counterparts they'll be working with on the ground. The move also means the service would save costs associated with designing and producing a new uniform, the service added.

“You know what's also … cost-saving not creating another pointless branch of the military,” said one Twitter user in response.

Task & Purpose is still trying to figure out what will be the official song of the Space Force. On Friday, reporter Jeff Schogol asked asked Pentagon spokesman Jonathan Hoffman if the Defense Department could hold a contest allowing service members to submit their ideas for the official Space Force song.

“That entire question makes me uncomfortable,” Hoffman replied during Thursday's Pentagon news briefing. “I will check with [Chief of Space Operations] Gen. Raymond the next time I see him on the anthem plans.”