The Space Force enlisted rank insignia are here, and they look a lot like ‘Star Trek’

'The Delta, of course, is pure Star Trek and everybody knows it.' 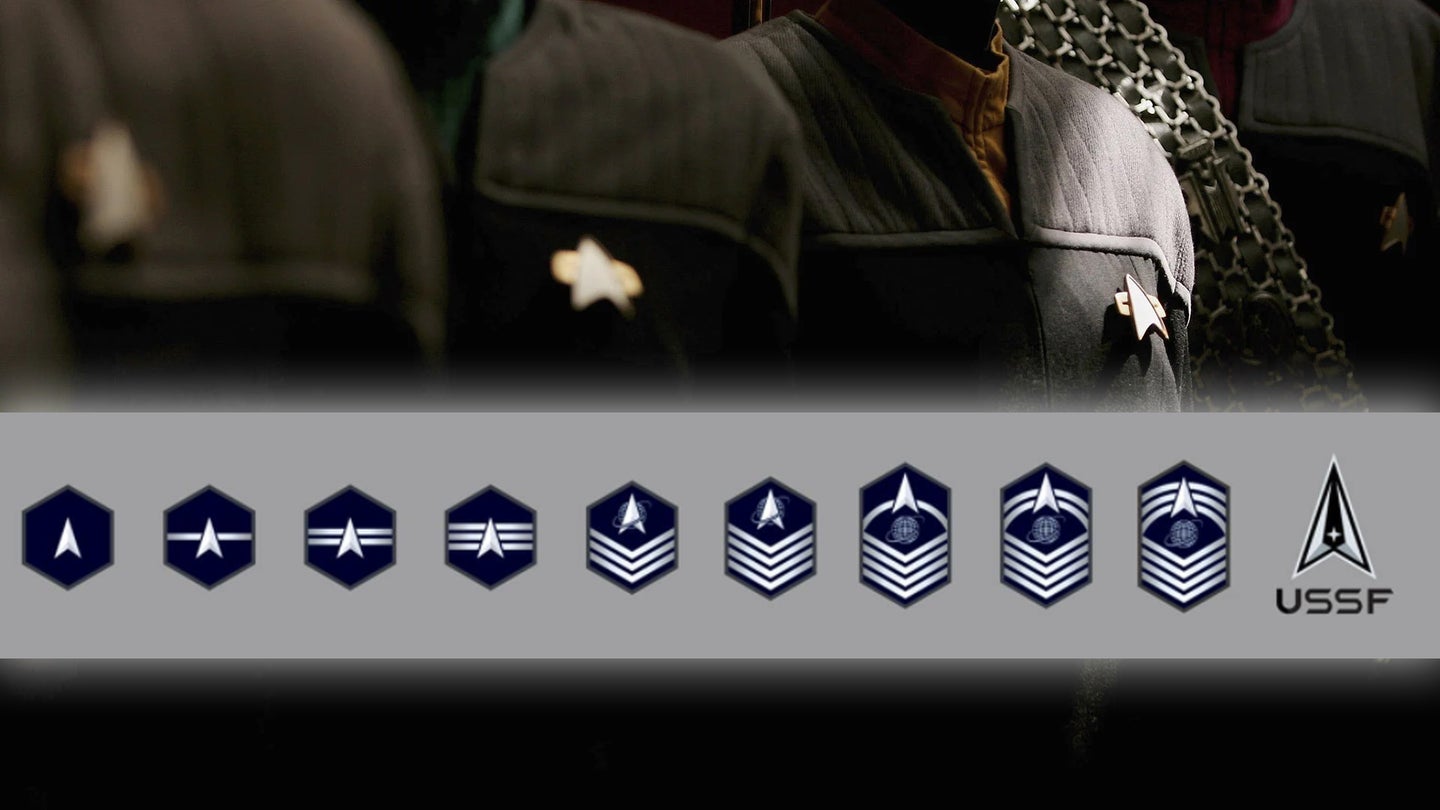 LONDON - AUGUST 02: Star Trek uniforms are pictured in a line on August 2, 2006 in London. Christie's New York are marking the 40th anniversary of the science fiction series with a sale of Star Trek studio items. (Photo by Bruno Vincent/Getty Images).
SHARE

America’s newest military branch continues to pay homage to “Star Trek” with its enlisted rank insignia, which look unmistakably like something that series creator Gene Roddenberry would have come up with.

Released on Monday, the Space Force’s enlisted rank insignia all feature a large triangle – known as a delta – which is a key symbol in the newly created service’s heraldry. As has been pointed out before, the Space Force’s seal – which features the delta on top of a globe with a white dot in an elliptical orbit – looks almost exactly like the Starfleet Command insignia from “Star Trek.”

Officially, the Space Force claims that the combination of the globe, delta, and elliptical orbit are all symbolic of the service’s mission.

“The Delta Wing evokes historic ties to the earliest days of the U.S. Air Force space community, and symbolizes change and innovation,” according to the Space Force’s website. “It also represents all variations of space vehicles that support our National Defense Strategy and National Security Space Strategy. Dark and light shades of grey within the delta embody the 24/7 operations of the Space Force, while the placement and upward orientation of the delta reveals the central role of the Space Force in defending the space domain.

“The Globe represents the terrestrial home of the U.S. Space Force and it’s support to the joint warfighters. The Elliptical Orbit [around the globe] signifies defense and protection from all adversaries and threats emanating from the space domain. It also represents ongoing interagency cooperation and allied partnerships.”

Each stripe on their insignia for E-1 through E-4 specialists represents “terra firma, a solid foundation of skills upon which the Space Force, represented by the Delta, is built,” according to an information sheet that Chief Master Sgt. of the Space Force Roger A. Towberman posted on his official Facebook page.

The chevrons on senior noncommissioned officers’ insignia are meant to symbolize low, medium, and geosynchronous orbits around Earth, the information sheet says.

“The placement of the Delta above the globe further signifies this higher level of responsibility while the Delta breaking through the orbits shows their willingness to explore and innovate,” the information sheet says.

Yet, the enlisted insignia still have a strong science fiction vibe to them. Director Paul Verhoeven approved of the rank insignias and Space Force uniform design.

“I was honored to see that the Space Force uniforms were very similar to the Fleet Military in Starship Troopers,” Verhoeven said.

For John Scalzi, a creative consultant on “Stargate Universe” and author of “Redshirts,” the parallels between the Space Force and “Star Trek” too close to be coincidental.

“I’m sure the designers were not unaware of how the military has been represented in various science fiction media and leaned into that for their own designs and messaging, Scalzi said. “The Delta, of course, is pure Star Trek and everybody knows it.”

He also noted that the “orbital chevrons” for senior noncommissioned officers are not to scale, adding it would be amusing to see how the Space Force could represent how high those orbits really are – especially the geosynchronous one, which would be 22,236 miles above the Equator in real life.

One major difference between real life and “Star Trek” is that the Space Force does not use Navy ranks, despite a suggestion from William Shatner, who played Capt. James T. Kirk on the original television series, and Rep. Dan Crenshaw (R-Texas), a Navy SEAL who offered an amendment to the House version of the fiscal 2021 National Defense Authorization Act that would have required the Space force to adopt the Navy’s rank structure. (It did not end up in the final defense policy bill.)

For Ronald D. Moore, who served as a producer for three “Star Trek” series and also as the executive producer for “Battlestar Galactica,” it would be more fitting for the Space Force to use Navy ranks for both enlisted Guardians as well as officers.

“Both ‘Star Trek’ and ‘Battlestar Galactica’ opted for naval nomenclature when visualizing space-going craft manned by large crews because of how ships are organized as opposed to aircraft,” said Moore, who attended Cornell University on a Naval Reserve Officers Training Corps scholarship. “Small spacecraft like Apollo and the Shuttle were manned by relatively small crews and terms like ‘pilot’ and ‘co-pilot’ made sense.”

“But when we’re talking about large craft – vessels – manned by significant numbers of crew, then naval terminology and customs feel more appropriate,” he continued. “To put it in Star Wars terms, an X-Wing is a spacecraft and so it has a pilot, a Star Destroyer is a ship and has a captain. And no one thinks Kirk was the pilot of the Enterprise.”

Moore is more than qualified to speak on this subject considering “Battlestar Galactica” had a strong following among service members and the show has even been analyzed for its portrayal of civil-military relations.

“If Space Force has ambitions to be something bigger and more adventurous then they should embrace the naval rank system as well,” Moore said.

UPDATE: This story was updated on Sept. 24 with a comment from Paul Verhoeven, director of Starship Troopers.