War is politics – and vice versa. 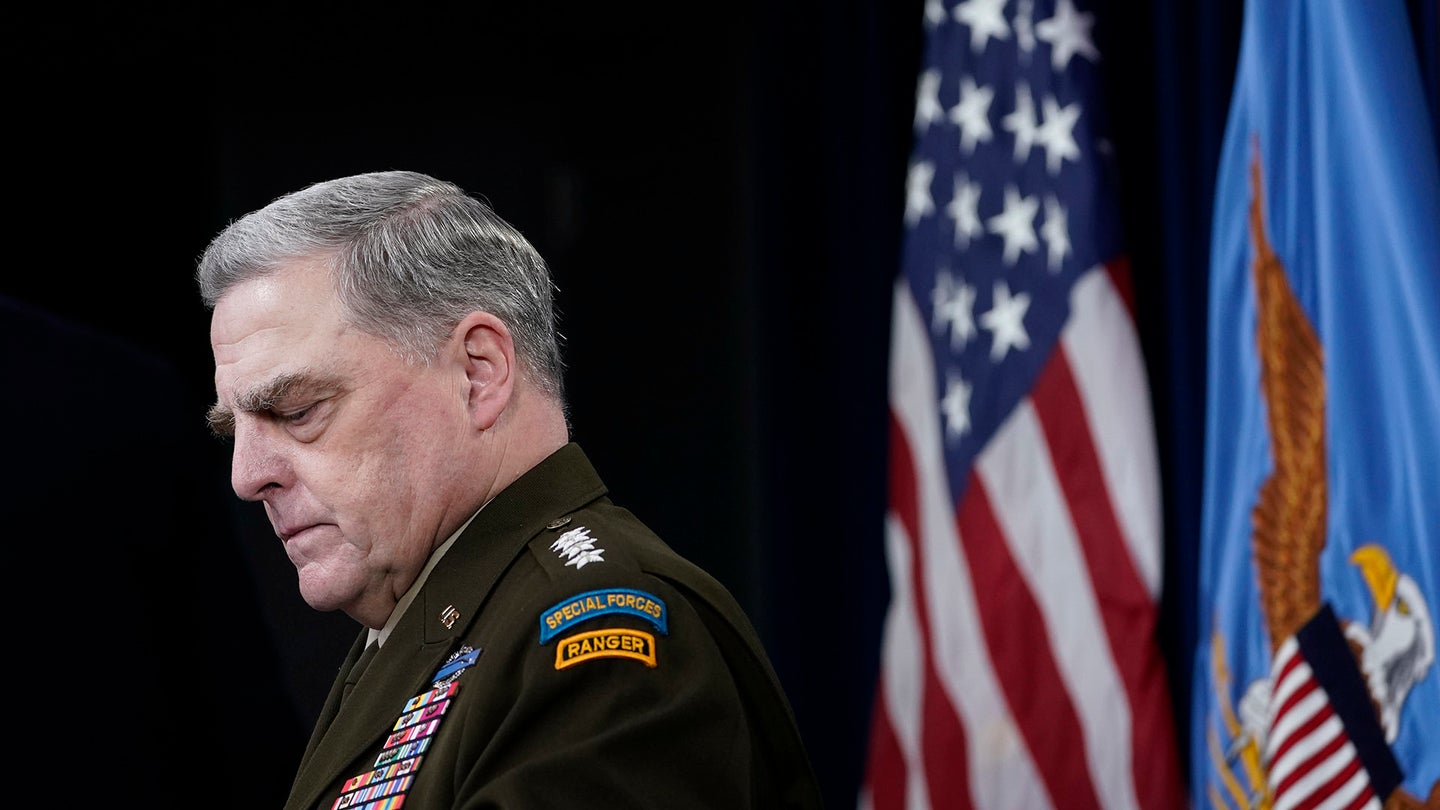 Joint Chiefs of Staff Gen. Mark Milley listens during a briefing with Secretary of Defense Lloyd Austin at the Pentagon in Washington, Wednesday, Sept. 1, 2021, about the end of the war in Afghanistan. (AP Photo/Susan Walsh).
SHARE

Willingly or not, Army Gen. Mark Milley, chairman of the Joint Chiefs of Staff, has been pulled into partisan politics, which are threatening to undermine American democracy and the military’s place in it as an apolitical institution.

Milley enraged critics last year for appearing in his camouflage uniform with then-President Donald Trump for a photo opportunity just after law enforcement had pushed peaceful protesters out of Lafayette Square in front of the White House. Milley later told National Defense University graduates he should not have been there.

Top Democrats were later incensed with Milley over the Defense Department’s slow response to the Jan. 6 Capitol Hill riots. It took more than three hours for the first National Guardsmen to arrive at the scene after police urgently requested their help.

Most recently, Milley has infuriated Republicans for shooting down their accusations that the military is indoctrinating troops with critical race theory and also for being portrayed in a slew of tell-all books about the Trump administration as trying to prevent the former president from illegally staying in power.

Trump, who reportedly once told Milley, “You’re a tough guy. I like tough guys,” now wants the general to be tried for “treason” after authors Bob Woodward and Robert Costa claimed in their forthcoming book “Peril” that Milley assured his Chinese counterpart shortly before the presidential election that the United States had no plans to attack China.

There are conflicting accounts about whether Milley promised to warn Chinese Gen. Li Zuocheng of any pending U.S. military attack or if Milley offered Li a more nuanced backchannel reassurance that the United States would not launch a pre-emptive strike against China.

Pentagon officials declined on Wednesday to commit to releasing a transcript of Milley’s Oct. 30 conversation with Li.

Army Col. Dave Butler, a spokesman for the Joint Staff, said that Milley’s conversations with the Chinese and others last October were part of his duties of “conveying reassurance in order to maintain strategic stability.”

“Gen. Milley continues to act and advise within his authority in the lawful tradition of civilian control of the military and his oath to the Constitution,” Butler said.

For Milley, the toxic political environment he finds himself in is a new type of battlefield. A Ranger and Green Beret, Milley has deployed to combat zones seven times – including three deployments to Afghanistan.

While he is no stranger to war, Milley is learning firsthand the truth of Clausewitz’s axiom that war is politics – and vice versa.

‘The United States military is an apolitical institution’

Since the Lafayette Square incident and Jan. 6 Capitol attack, several books have been published about the Trump administration that have portrayed Milley favorably. Milley often comes across in these books as a principled military officer who tried to keep his commander in chief from going too far.

In “I Alone Can Fix It,” authors Carol Leonnig and Philip Rucker wrote that Milley was concerned Trump would invoke the Insurrection Act to use the military to keep him in power.

“This is a Reichstag moment,” the book quotes Milley telling aides as Trump lied about election fraud. “The gospel of the Führer.”

And in “Frankly, We Did Win This Election: The Inside Story of How Trump Lost,” author Michael Bender writes that Milley pushed back when Trump tried to order troops and police to shoot protesters following the death of George Floyd at the hands of a Minneapolis police officer.

Each time a new book has been published, Milley has come into the crosshairs of Trump’s surrogates, such as professional demagogue and Fox News personality Tucker Carlson, who has accused Milley of trying to subvert the sacrosanct principle of civilian control of the military.

In July, Carlson – who was apparently oblivious to the fact that the chairman of the Joint Chiefs of Staff does not command any forces – asked during his show, “Why is Mark Milley still in command of the U.S. military?”

While Milley has not publicly responded to how he has been featured in recent books, he has stressed that he’s always provided the best professional military advice to both Trump and President Joe Biden.

“But I want you to know, and I want everyone to know, I want America to know that the United States military is an apolitical institution, we were then and we are now,” Milley told reporters at a July 21 Pentagon news briefing. “And our oath is to the Constitution, not to any individual at all.”

“And the military did not and will not and should not ever get involved in domestic politics,” he continued. “We don’t arbitrate elections. That’s the job of the judiciary, and the legislature, and the American people. It is not the job of the U.S. military. We stay out of politics, we’re an apolitical institution.”

Given the current environment, Milley’s comments about the military remaining above politics sound more like an aspiration than reality. Partisanship has devoured every aspect of American life. It affects whether we wear masks in public or get vaccinated for the novel coronavirus (COVID-19).

Biden has publicly supported Milley so far, telling reporters on Wednesday that he has “great confidence” in the general.

Rep. Adam Smith (D-Wash.), chairman of the House Armed Services Committee, has also voiced his support for how Milley has performed as chairman of the Joint Chiefs of Staff.

“When you choose a life of public service in the nation’s capital, politics is unavoidable, no matter the job or role,” Smith said.  “As chairman of the Armed Services Committee I have a great working relationship with Gen. Milley, and I feel strongly that his expertise and leadership are crucial to the work being done at the Department of Defense. Gen. Milley has done, and is doing, an outstanding job as Chairman of the Joint Chiefs of Staff and I strongly support him remaining in the position.”

Meanwhile, Rep. Mike Rogers, the ranking Republican on the House Armed Services Committee, indicated that he and his fellow Republicans want to know more about the supposed revelations that Woodward and Costa wrote about in “Peril.”

“Gen. Milley will be testifying before Congress soon and there’s a lot of questions that I know my colleagues and I have,” said Rogers, of Alabama. “I hope that we will be able to get answers on these recent reports that have come out regarding his conduct.”

Both Milley and Defense Secretary Lloyd Austin are expected to appear before the Senate Armed Services Committee on Sept. 28. While the hearing is nominally an opportunity for lawmakers to ask about the chaotic Afghanistan withdrawal, members of Congress have been known to ask questions that are off topic.

Milley firmly believes that the military should be civilian-led and non-partisan and he often describes the Constitution as “our north star” and “directional beacon,” said Col. Butler, the Joint Staff spokesman.

“Anyone can look at his comments, speeches and public addresses and see that Gen. Milley cares deeply about our oath to the Constitution,” Butler said. “As a matter of fact, it’s very difficult for the speechwriters to get anything past him that does not address the Constitution in some way.”

Throughout his career, Milley has cited the Constitution countless times, both publicly and among his subordinates, Butler said. He has also worked to be an independent and apolitical advisor who will give civilian leaders with candid advice, regardless of which party they belong to.

“It deeply bothers Milley that he and the military have been repeatedly drawn into politics,” Butler said.

Still, it’s not surprising that Milley has been pulled into the political arena given how strong partisanship is in America right now, said Kori Schake, a defense expert with the conservative American Enterprise Institute think tank in Washington, D.C.

“Our military buffers itself really well from politics, but the maelstrom in U.S. politics just now is making it really hard,” said Schake, who co-authored a book about the civil-military divide with retired Marine Gen. James Mattis.

The risk is that the perception that the military has become partisan will prompt civilian leaders to select leaders for top jobs based on their political beliefs, thus aggravating the problem, she said.

Partisanship has long been the lens through which many Americans have seen both Milley and the military, said Risa Brooks, a political science professor at Marquette University in Wisconsin.

“If they hear Milley talking about racial politics, it’s either: He’s good because he’s supporting the importance of racial equality; or, he’s bad because he’s a ‘woke general,’” Brooks said.

The most recent accusations against Milley stemming from the book “Peril” reinforce publicly held beliefs that either the military as a whole or certain general and flag officers are partisan actors who only protect Americans who are on their side, she said.

“I think at the end of the day, when you have the military being viewed as a partisan actor – whether it’s by the public, by Congress, by the president – you’re undermining that essential trust relationship and essential oversight role that you need for national security.”