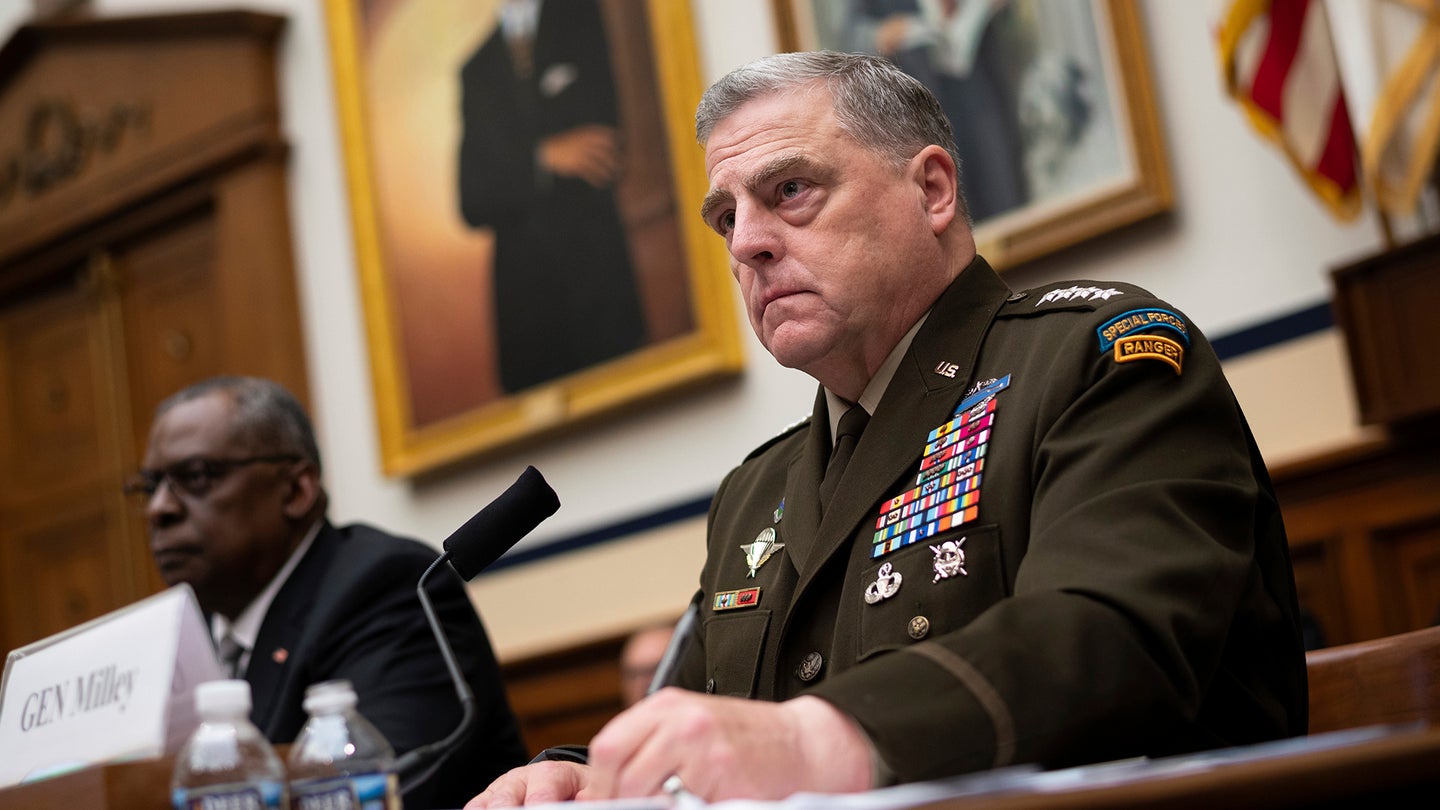 As has happened so often recently, a Congressional hearing on the military veered off-topic and into discussions, accusations, and debates over “wokeness” and the teaching of critical race theory in the military.

During Wednesday’s House Armed Services Committee hearing on the Defense Department’s proposed budget, an angrier-than-usual-looking Gen. Mark Milley, the Chairman of the Joint Chiefs of Staff, responded to questions from two Republican lawmakers about the teaching of critical race theory at West Point, the United States Military Academy. Critical race theory is a loosely defined term that refers to the academic examination of law as it pertains to race, but recently the meaning has shifted, with some conservative lawmakers and pundits suggesting that critical race theory espouses the idea that America is fundamentally racist.

But more than just pushing back on fears and claims that the U.S. military has become a breeding ground for progressive beliefs, Milley seemed to be particularly ticked off at the notion that you can’t read a book without suddenly becoming indoctrinated by the ideas contained in said text. (For anyone who needs this spelled out for them: That is not how books work, as the Navy’s top officer recently pointed out during another Congressional hearing that played out much the same way.)

“I’ve read Mao Zedong, I’ve read Karl Marx, I’ve read Lenin. That doesn’t make me a communist,” Milley said. “So what is wrong with understanding — having some situational understanding about the country that we are here to defend? And I personally find it offensive that we are accusing the United States military, our general officers, our commissioned and noncommissioned officers of being ‘woke’ or something else because we’re studying some theories that are out there.”

The scene unfolded after Rep. Chrissy Houlahan (D-Pa.) yielded a portion of her time so that Milley could offer a response to previous questions on critical race theory from Republican Congressmen Matt Gaetz and Mike Waltz of Florida that were directed at Defense Secretary Lloyd Austin.

While Austin didn’t have much to say in direct response to Waltz, whose questions focused on the teaching of critical race theory at West Point and included concerns over a seminar entitled “Understanding Whiteness and White Rage,” Milley did have something to offer on the topic.

In fact, Milley had quite a lot to say:

“First of all, on the issue of critical race theory, etc., I will obviously have to get much smarter on whatever the theory is, but I do think it is important, actually, for those of us in uniform to be open-minded and be widely read. And the United States Military Academy is a university and it is important that we train and that we understand — and I want to understand white rage, and I’m white, and I want to understand it.”

“What is it that that caused thousands of people to assault this building and try to overturn the Constitution of the United States of America,” said Milley, referring to the Jan. 6 riots at the U.S. Capitol. “What caused that? I want to find that out. I want to maintain an open mind here and I do want to analyze it. It’s important that we understand that because our soldiers, sailors, airmen, Marines, and guardians, they come from the American people. So it is important that the leaders, now and in the future, do understand it.”

“I’ve read Mao Zedong, I’ve read Karl Marx, I’ve read Lenin, that doesn’t make me a communist. So what is wrong with understanding — having some situational understanding about the country that we are here to defend? And I personally find it offensive that we are finding the United States military, our general officers, our commissioned and noncommissioned officers of being ‘woke’ or something else because we’re studying some theories that are out there.”

On the matter of critical race theory as an academic course, Milley said “that was started at Harvard Law School years ago and it proposed that there were laws in the United States — antebellum laws — prior to the Civil War that led to a power differential with African Americans that were three-quarters of a human being when this country was formed, and then we had a Civil War and an Emancipation Proclamation to change it, and then we brought it up to the Civil Rights Act of 1964 — took another hundred years to change that.”

“So look, I do want to know — and I respect your service and you and I are both Green Berets,” Milley said, referring to Waltz, who is also an Army Special Forces veteran. “But I want to know, and it matters to our military and the discipline and cohesion of this military.”