3 things not to bring to the Pentagon: a loaded shotgun, a rusted machete, and Jim Beam Vanilla

In this episode of 'COPS: Pentagon Edition,' here's a list of what NOT to bring in your car. 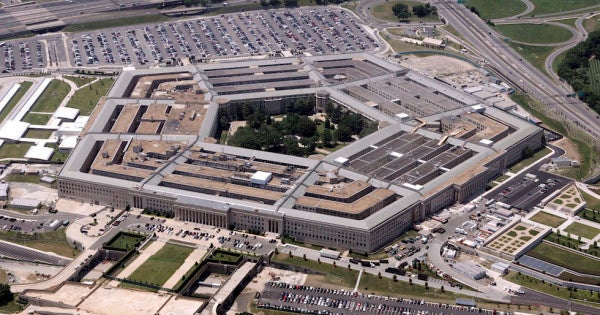 During the course of the conversation, the man admitted he had a loaded firearm in his truck and gave police permission to conduct a search, said Pentagon spokeswoman Heather Babb.

“Sergeant Murdock discovered a loaded 12-gauge shotgun, a rusted machete, two pocket knives, marijuana and a bottle of alcohol and arrested the individual,” Babb said on Monday. “During processing, the man agreed to voluntarily commit himself for a psychiatric evaluation at Arlington County Department of Human Services and was transported there.”

Scott MacFarlane, an investigative reporter with NBC's affiliate in Washington, D.C., first tweeted the arrest report on Monday. In the report, a Pentagon police officer wrote that the man “spoke incoherently and did not answer my questions directly.

“The alcohol police found in the man's 2000 Chevrolet Silverado pickup truck was an open 1.75 liter bottle of Jim Beam Vanilla, the report says.

While the Pentagon has not officially released the man's name, Task & Purpose was able to confirm he was not Danny Trejo