"There's just too much evidence for a reasonable man or woman to just turn the page and say: 'Put on your tinfoil fat. This is just a conspiracy theory,'" said Rep. Chris Smith (R-N.J.) 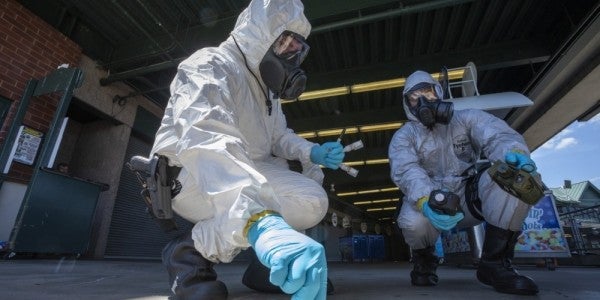 A lawmaker who wants the Pentagon to investigate whether military biological weapons experiments with ticks cause Lyme disease insists he is not spreading conspiracy theories.

Smith authored an amendment to the House version of the Fiscal 2020 National Defense Authorization Act that would require the Pentagon to investigate if the military released infected ticks onto an unsuspecting American public “by accident or experiment design.”

But experts say they are skeptical of any link between U.S. military bioweapons research and the outbreak of Lyme disease.

“Ticks and Lyme Disease would be a very strange choice as a deliberate bioweapon because ticks are difficult to work with, don't have wings, and Lyme would hardly be a force reducer,” said Robert Peterson, an entomology professor at Montana State University.

Pentagon spokeswoman Heather Babb declined to discuss Smith's amendment because the Defense Department does not comment on proposed legislation.

“DOD takes extreme care in all of our research programs to ensure the protection of our personnel and the community,” Babb said.

When Smith announced his amendment, he cited the book “Bitten: The Secret History of Lyme Disease and Biological Weapons,” which looks at U.S. military experiments with ticks.

“There's just too much evidence for a reasonable man or woman to just turn the page and say: 'Put on your tinfoil fat. This is just a conspiracy theory,'” Smith said. “And yet, people with credentials will say that, which begs the question: Why would they even say that?”

Kris Newby, who wrote “Bitten,” said she discovered circumstantial evidence linking the outbreak of Lyme disease in the 1960s to the U.S. military.

As proof, Newby cites an interview she had with Dr. Willy Burgdorfer, the American scientist who discovered what causes Lyme disease, who told her shortly before his death that he had been instructed to keep his research into a possible cause for Lyme disease a secret.

“My hypothesis is that was the biological weapon they were trying to cover up,” said Newby, a science writer at the Stanford School of Medicine in California.

“I can't connect all those dots right now,” said Newby, who survived Lyme disease. “My theory is that it was a genetically engineered Rickettsia but, as a journalist, I can't prove that.”

Others find the idea the notion that the U.S. military infected ticks with Lyme disease more than a little far-fetched.

“I've heard a little bit about this story and speculation and whatnot — it's a really intuitively weak accusation,” said Jeffrey Lockwood, who teaches natural sciences and humanities at the University of Wyoming.

Lockwood wrote “Six-Legged Soldiers: Using Insects as Weapons of War,” about the U.S. military's biological warfare experiments with ticks, flies, and fleas. It turns out the Army did conduct research into whether ticks could be used to spread tularemia, relapsing fever, and Colorado fever during the Cold War.

Despite these experiments, Lockwood said he is “profoundly dubious” that the U.S. military looked into using ticks to transmit Lyme disease.

Ticks are not the best vector to spread bioweapons because they do not go very far and Lyme disease is a slow-acting pathogen, Lockwood told Task & Purpose. Other tick-borne diseases are far worse to humans.