The Army is two thirds of the way to completing the Texas university trifecta. 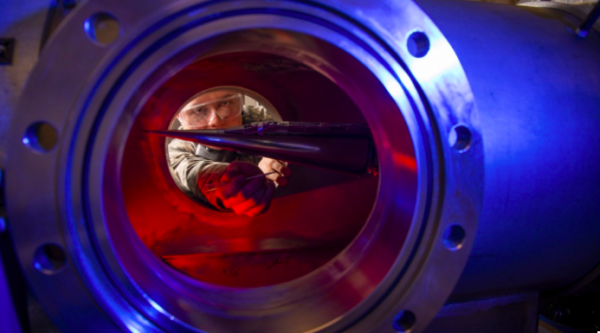 Texas A&M, along with the Texas legislature, are throwing a major investment into Army Futures Command with a $130 million facility that aims to make A&M “the hypersonics research capital of the country,” the university system said in a press release.

The facility — being built at the Texas A&M Systems' RELLIS Campus in Bryan, Texas, which is just minutes from College Station — will allow AFC to further develop its modernized technologies, the press release says. A&M will be building a $50 million building to hold laboratories and AFC offices, and putting another $30 million into the new facility's infrastructure.

The Texas legislature is putting up an additional $50 million toward the project for an “innovative proving ground.” The new complex is also going to include a kilometer-long tunnel for testing hypersonics.

A&M made its desire to collaborate with the Army clear in November when the head of the command, Gen. John “Mike” Murray, visited the campus after naming Austin, Texas and the University of Texas System the headquarters for AFC.

“There is not a question you can ask us that the answer is not yes,” A&M Chancellor John Sharp told Murray at the time, per Texas Monthly.

Murray told reporters this July that A&M would be focusing on “hypersonics and directed energy research,” and that soldiers would be paired with engineers “to go into some agile development capability and solving problems for soldiers.”

“We are humbled and grateful to the people of Texas, Texas elected leaders, and the Texas A&M University System for the opportunity to further develop our strategic partnership through the establishment of the combat development complex on the RELLIS Campus,” Murray said in the A&M press release. “This effort will certainly prove vital as we work together to discover, develop, and test ideas and concepts that will help our Soldiers, and our future Soldiers, to protect America's tomorrows — beginning today.”

The new combat development complex isn't expected to be completed until June 2021, the press release says, and could draw other companies to Bryan that are interested in working with AFC. One of the benefits of building the complex at RELLIS — aside from its proximity to Fort Hood and AFC headquarters in Austin — is its closeness to Texas A&M's College of Engineering and Disaster City, “the world's largest search and rescue training facility that can double as a training site for urban warfare,” according to the press release.

As Task & Purpose's (unofficial) senior Texas correspondent, I can't help but wonder if AFC is aware of the crippling, all-consuming rivalry between UT and A&M? Is the Army taking full advantage of that primal need to compete in order to further their goals? And furthermore, is AFC ever going to work with the only good Texas university — Texas Tech?

Texas Tech and Army Futures Command have not yet responded to Task & Purpose on whether they have spoken about possible collaboration in the future.

As a Texas Tech graduate, it physically pains me to write anything about A&M and UT that does not include trashing their football teams and asserting Red Raider dominance. The U.S.-China-Russia great power competition has nothing on UT-A&M-Texas Tech.