The Army has used the Association of the U.S. Army's 2017 annual conference to outline a major new modernization program —... 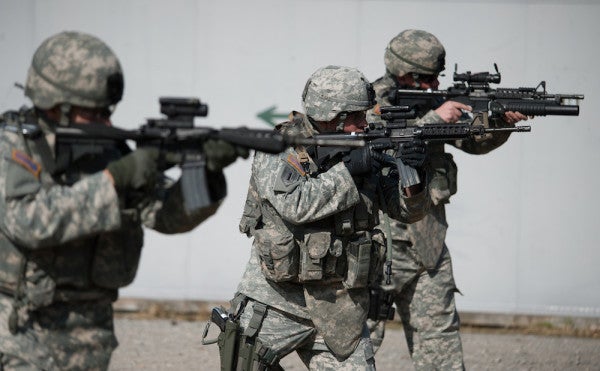 The Army has used the Association of the U.S. Army's 2017 annual conference to outline a major new modernization program — one that may change the face of American land forces as we know it.

Acting Secretary of the Army Ryan McCarthy, Chief of Staff of the Army Gen. Mark Milley and Secretary of Defense James Mattis used the AUSA exposition from Oct. 9-11 in Washington, D.C., to lay out a major new push to put the Army on a strong footing to face future adversaries whose technology is eclipsing America’s historical prowess.

Milley confirmed that the modernization shakeup would constitute the “largest reorganization of the institutional Army in 40 years,” when commands like TRADOC and Army Material Command were established after the Vietnam War. “Unless we do this we’ll be losing ground to potential adversaries.”

In his opening speech to the AUSA conference, Mattis outlined some of the threats facing America: terrorism, the destabilizing impact of North Korea in the Pacific and recent Russian aggression in the Ukraine. And while the United States has long enjoyed a significant technological advantage over almost all of the world’s militaries, senior Army officials are now concerned this edge may be dwindling.

McCarthy criticized the Army’s long-standing program of refitting older equipment, saying: “There is a limit to the incremental improvements that can be made before they no longer offer the degree of overmatch the Army requires,” suggesting that while they have previously helped maintain America’s strategic and tactical advantage “we're squarely on the curve of diminishing returns.”

To address this, McCarthy announced the Army has formed a “modernization command,” starting with a 120-day task force led by Lt. Gen. Edward Cardon, which will explore the Army’s future needs and set out the new command’s role. McCarthy explained that the command’s role “will extend from idea to delivery” of the kit the Army needs to modernize effectively.

The announcement came following the release of an Oct. 3 letter from Milley to other senior officers last week outlining the organization's aims. Milley explained that reform to the Army’s procurement system is essential to modernization with a focus on making “soldiers and units more lethal.”

To do this, Milley writes that the Army “must turn ideas into actions through continuous experimenting and prototyping, improving acquisition business processes, pursuing appropriate commercial/off-the-shelf options, and improving training.”

Modernization Priorities for the U.S. Army by Jared Keller on Scribd

At the moment, the Army’s acquisition is stymied by bureaucratic complexities, and Milley hopes that a more centralized procurement model will streamline technology development and acquisition and “overcome the bureaucratic inertia and stove-piping found in the Army's current construct.”

The service-wide modernization will initially focus on several key areas including older command and control communications (that are immune to cyber and electronic warfare), air and missile defense, next-generation vehicles and helicopters, and upgraded individual weapons for soldiers on the ground.

That last item comes in the wake of the collapse of the Army’s Interim Service Combat Rifle program, which sought to equip infantry with a modern 7.62 mm rifle capable of reaching out to longer ranges than the current M4A1 and penetrate increasingly prolific body armor.

Two soldiers work together in the Integration Motor Pool at Fort Bliss, Texas as part of Army Warfighting Assessment 17.1 as part of a broad modernization effortPhoto via DoD

What we don’t yet know is what form the new command will take and what its impact on procurement will be. Will it control all Army Requests For Information, Requests For Proposals and contract awards? If so, how will it overcome potential bias from industry and senior officers? There is a clear desire for soldier-driven procurement but how this will be structured and carried out remains to be seen.

The Army is hoping that the new Modernization Command will stand up in 2018 — and begin what is certain to be the long and complex task of preparing and equipping the U.S. Army for the mid-21st century. Only history will tell whether it's a success or not.