The United States Army is quickly reorganizing to expand its training, advising, and assistance to foreign forces — even as... 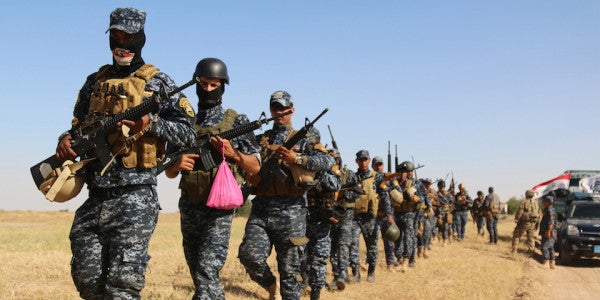 The United States Army is quickly reorganizing to expand its training, advising, and assistance to foreign forces — even as two militaries trained and equipped by the U.S. are clashing with each other in the contested Iraqi city of Kirkuk. The flaring military confrontation between Kurds and Iraqi federal troops highlights the dangers of bolstering the battlefield capabilities of foreign governments whose objectives don’t necessarily align with America’s national interests.

The Army announced on Oct. 16 that it will speed up the fielding of its security force assistance brigades, or SFABs, which will be manned by conventional troops but structured like the 75th Ranger Regiment and also maintain similar physical standards. The original goal was to have five SFABs stood up by 2022, with the first ready to deploy as soon as 2018. It is unclear if that timeline has changed, though the Army seems to be suggesting it has.

“Our fundamental strategic approach to deal with terrorism and terrorists is to work by, with and through host nations, partner nations, friends and allies — their indigenous security forces — in order to provide for a stable environment for their own country,” Gen. Mark Milley, the Army’s chief of staff, said on Oct. 9 at the Association of the U.S. Army’s annual meeting in Washington. “By doing that, we’ll meet U.S. objectives.”

Once formed, the brigades will deploy to train, advise, and assist partner militaries in countries around the world…including Iraq, where Iraqi Kurds and the Iranian-backed Iraqi government — both key U.S. allies in the fight against ISIS — appear to be on the brink of a civil war. Tensions in the region escalated dramatically since the Iraqi Kurdish Regional Government held a referendum on Sept. 25 in which an overwhelming majority of Kurdish voters affirmed the region’s right to declare independence from Baghdad.

Washington also strongly opposed the Kurdish vote for independence, as did neighboring Turkey and Iran. The inclusion of Iranian-backed Shiite militias in the combined force that advanced into parts of Kirkuk on Oct. 15 infuriated the Kurdish Regional Government, which is controlled by the Kurdistan Democratic Party, or K.D.P. The peshmerga general command in Erbil, the capital of the Kurdish autonomous region, told The New York Times that the presence of the Shiite militias amounted to “a flagrant declaration of war against the nation of Kurdistan.”

The Kurdish peshmerga seized Kirkuk in 2014 after the Iraqi military fled amid an ISIS offensive that saw may key cities in the region fall to the terror group. On Oct. 15, the Iraqi government, backed by Iran, launched a “probing attack” against peshmerga forces southwest of Kirkuk, according to the Institute for the Study of War, and then easily secured parts of the city after Kurdish troops with the Patriotic Union of Kurdistan, or P.U.K, a rival of the K.D.P, agreed to withdraw to make way for the Iraqi advance.

The “train, advise, and assist” effort has been a core pillar in the U.S. strategy to degrade and destroy ISIS in Iraq and neighboring Syria. And while the anti-ISIS campaign has been largely successful on both sides of the border, the Kurdish and Iraqi militaries, which were reluctant partners in that fight, are now flush with American arms, equipment, and tactical doctrine that they are now turning against each other.

“We have enough weapons,” a Kurdish field commander stationed north of Kirkuk told The New York Times on Oct. 16. “We can fight as long as we have to.”

A spokesman for the American-led coalition told The New York Times that U.S. troops are not supporting either side in the Kirkuk standoff.

The Army intends to build a total of six SFABS — five in the regular Army and one in the National Guard. Two of the SFABs will focus on the Middle East, while the other four will focus “on the Pacific, Africa and possibly Europe,” the Army said in a statement. The Army says its goal is to enhance its ability to fight global terrorism while freeing up its traditional forces to focus on readiness for conventional warfare.

The 500-600 officers and non-commissioned officers selected for the first SFAB are currently being trained at Fort Benning, Georgia. “SFABs are not Special Forces,” Brig. Gen. Brian Mennes, director of force management with the Army’s G-3/5/7, said at the AUSA meeting on Oct. 9; however, as the Army notes, soldiers in the units will receive “some comparable training, including language instruction.”

As Stars and Stripes reports, the Army is aiming to add 17,000 more soldiers to the active-duty component in fiscal year 2018 to “offset losses to combat formations as it moves experienced soldiers into” the SFABs. In May, the Army announced that troops who volunteered to join the SFABs would receive a $5,000 bonus — one of several perks intended to entice top-performing soldiers into a post that will likely entail a lot of time spent overseas.

“We are likely to be involved in train, advise, and assist operations across the world for many years to come,” Milley said on Oct. 9 at AUSU. “We think it’s about time we recognize that fact with force structure specifically designed to train, man, and equip organizations that can go forward for those operations.”