With training for the first of six new so-called Security Force Assistance Brigades (SFABs) set to begin this fall, the... 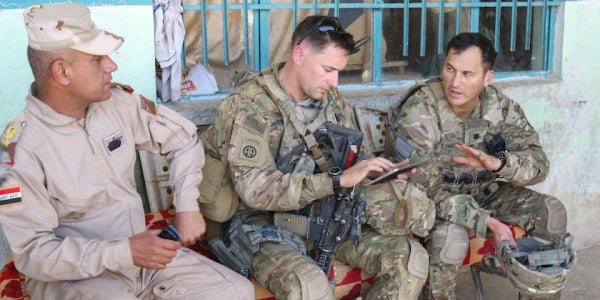 With training for the first of six new so-called Security Force Assistance Brigades (SFABs) set to begin this fall, the U.S. Army is offering several perks, including a $5,000 bonus, to recruit seasoned soldiers for the assignment, Army Times reports.

“In addition to being a volunteer, we want the best of the best,” Brig. Gen. David Lesperance, the deputy commanding general of armor at the Maneuver Center of Excellence, told Army Times. “[We want the [op-level talent coming out of key and development assignments.”

More specifically, the Army is looking for former squad leaders and platoon sergeants, according to a May 18 Army press release. And while each of the SFABs will come equipped with intelligence, logistics, and other support elements, the bulk of the personnel will come from the Army’s infantry and armor branches.

In addition to the bonus, volunteers will also be allow to choose their follow-on assignment. The Army is also touting the fact that, because the brigades will only be manned by senior personnel, NCOs will not be burdened by the responsibility of caring for and training junior enlisted soldiers.

“Army leaders at the highest levels are committed to making the SFABs a premier assignment,” Maj. Nick Clemente, a strategic planner with HRC’s readiness branch, said in a press release. “Over time, I expect that we will see positive promotion trends for officers and NCOs who excel during their SFAB tour.”

All of these perks are meant to entice top-performing soldiers into a post that will likely entail a lot of time spent overseas. The Army plans to stand up a total of six SFABs by 2024 — five from the Active Duty component and one from the Army National Guard. Each will be manned by 529 soldiers.

At a time when conventional U.S. forces have assumed an almost exclusively backseat role in combat theaters like Iraq and Afghanistan, the SFABs will be specially equipped to train and build up local security forces so they can take the lead in operations. That mission is currently being handled by the Army’s Brigade Combat Teams, or BCTs.

“The creation of SFABs is intended to help alleviate this challenge by providing a purpose built advise and assist force while freeing up our BCTs to be ready for their primary mission,” Clemente said in the release.

An initial crop of about 500 soldiers — all officers and senior NCOs— are due to report to Ft. Benning, Georgia in October, where they will undergo six weeks of training to prepare them for an SFAB assignment lasting between two and three years. Two hundred of those troops will then receive 16 weeks of intensive language training, while others will attend an eight-week course.

“There will be some in-classroom instruction, but the majority of the training will be situational training exercises,” Lesperance told Army Times. “Hands-on, performance-oriented training with a lot of contracted regional partners, that allow us to make sure they get some type of immersion into the correct languages and the types of tasks they will do.”

The Army has not yet established a deployment schedule for the SFABs, but Lesperance says that the first brigade will deploy as soon as it’s ready.

“It’s not a matter of if, it’s just when,” he told Army Times” And I think everybody knows that.”