Army Chief of Staff Gen. Mark Milley made a silly mistake Oct. 31 while attempting to perform damage control amid... 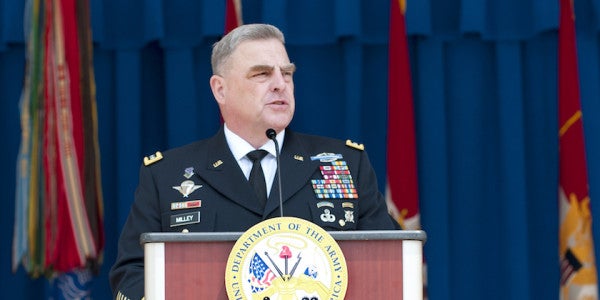 Army Chief of Staff Gen. Mark Milley made a silly mistake Oct. 31 while attempting to perform damage control amid outrage over how the Army’s new Security Force Assistance Brigades are being branded, drawing a second wave of backlash from the Special Forces community he was trying to placate.

At the heart of the controversy is the question of whether SFAB is cribbing SF’s signature style.

The squabble ignited over the weekend after photos of the SFAB soldiers’ planned beret surfaced on the internet. The olive-drab berets bear a striking resemblance to the forest-green berets worn by, well, Green Berets — whose primary mission of embedding with and training irregular forces also resembles the new SFAB’s foreign advise-and-assist mission.

The outrage culminated in a petition onChange.org to “Stop issuance of the Green Beret to the U.S. Army 1st Security Force Assistance Brigade,” started by Derek Gannon, a retired Special Forces non-commissioned officer.” On Nov. 1, the petition had more than 85,000 signatures, past the halfway point to its goal of 150,000.

In an effort to draw clear distinctions between the SFABs and Special Forces, Milley told Army Times on Oct. 30 that SF “does not train the Afghan National Army.” He added, “They don’t train them now. They never have. Same thing in Iraq.”

That was an odd thing for Milley — a Green Beret — to say, as it’s simply not true. SF teams have trained troops in both the Iraqi and Afghan national militaries.

Among the soldiers who were quick to point this out was Milley himself, who slid into the comments section of the Army Times article to clarify his remarks.

“I should not have said that SF ‘never’ advised the ANA or ISF,” Milley wrote. “That is not true. The majority of advising to the ANAN and ISF conventional units was done by conventional US Army and Marine units while SF focused on the ANA Commandos, Iraqi Special Forces and other specialized units. All of which were part of the ANA or the ISF. Also, there were some SF teams that did advise ANAN and Iraqi conventional units.”

In the Army Times interview, the Army chief of staff explained that while SFAB units will be fully qualified to advise foreign troops in Iraq and Afghanistan — as well as in more off-the-grid locations in Africa, South America, and Asia — the hardcore, behind-enemy-lines sorts of missions would still be left to SF. “There is no intent to replace Special Forces, or to compete with Special Forces,” he said.

However, Milley did point out that the SFAB brigades will be formed of soldiers who “aren’t run of the mill” and acknowledged that SFAB and SF units may find themselves operating in the same battle space. “I ask that people support this concept,” he wrote in his comment on the Army Times article. “SF is way overstretched and this is an effort to professionalize and institutionalize the conventional US Army advisory capability.”

In his comment, Milley also doubled down on a promise he had made in the Army Times on the color of the SFAB beret. In the interview, Milley insisted that the beret in the photo that had gone viral was not a shade of green, but rather a shade of brown. “The beret is based off of the British infantry beret,” he explained. But Milley conceded that he understood why people were confused, saying, “I looked at it, and I said, ‘I could see where someone would think it looks green.’” According to Army Times, Milley said that the Army “is taking a second look at the beret color… to make sure the final version is obviously distinct from” the SF beret.

In his online comment, Milley was more blunt: “I want to assure everyone that the color of the SFAB Beret will be brown and will not be green or any shade of green.”

(If I were a gambling man, I’d bet a million dollars that when it is fully fielded, the SFAB beret is going to be the brownest brown the world has ever seen.)

The first SFAB brigade (called the 1st Security Force Assistance Brigade) is currently training for its debut deployment to Afghanistan next year. The Army intends to build a total of six SFAB brigades — five in the regular Army and one in the National Guard. At least five of them should be operational by 2022. The goal is to enhance the Army’s ability to fight global terrorism while freeing up its traditional forces to focus on readiness for conventional warfare.

The beret is one of several perks the Army is offering to entice seasoned soldiers for the assignment. Another is a $5,000 bonus. “In addition to being a volunteer, we want the best of the best,” Brig. Gen. David Lesperance, the deputy commanding general of armor at the Maneuver Center of Excellence, told Army Times in May. “[We want] top-level talent coming out of key and development assignments.”