On August 26, San Francisco 49er’s Colin Kaepernick told a reporter before a preseason game against the Green Bay Packers... 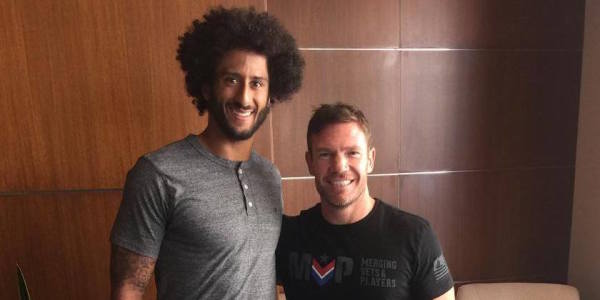 On August 26, San Francisco 49er’s Colin Kaepernick told a reporter before a preseason game against the Green Bay Packers that he was “not going to stand up to show pride in a flag for a country that oppresses black people and people of color.” The 28-year-old quarterback had just been asked why he was sitting down during the playing of the “Star Spangled Banner,” and his defiant response immediately set off a fiercely polarizing debate, drawing praise from those who saw it as a valiant act of protest against racial injustice, and scorn from those who perceived it as a blatant act of disrespect.

A number of professional athletes have gone on the record to voice either their support or disdain for Kaepernick, but it is Nate Boyer, who played long snapper for the University of Texas before signing on as a free agent with the Seattle Seahawks, who has emerged as perhaps the primary voice of reason in this debate. The 35-year-old former U.S. Army Green Beret leveraged his unique background as both a football player and a combat veteran to open a constructive dialogue between the opposing sides.

Amid accusations that Kaepernick’s refusal to stand during the national anthem equated to a slap in the face to service members who’ve fought and died overseas, Boyer seems to have had the biggest influence in terms of helping the quarterback understand how his decision could be interpreted as disrespectful by veterans, while also encouraging those who’ve served to keep it all in perspective.

When asked in an interview with NFL Total Access how he thinks other veterans and Americans should respond to Kaepernick’s actions, Boyer said, “I would just listen. I would shut my mouth and just listen.”

On Sept 1, Boyer’s efforts to break bread with Kaepernick, which was initiated with an open letter to the quarterback that was published in the Army Times, culminated in a face-to-face discussion between the two men in San Diego. Joined by 49er’s safety Eric Reid, Boyer and Kaepernick spoke for roughly 90 minutes, according to ESPN. Kaepernick was evidently moved enough by the conversation to kneel during the national anthem that night, despite the fact that just a few days ago he publicly vowed to continue sitting.

Boyer, hand over his heart, stood by Kaepernick’s side.

“We were talking to him about how we can get the message back on track and not take away from the military, not take away from pride in our country but keep the focus on what the issues really are,” Kaepernick told ESPN. “As we talked about it, we came up with taking a knee because there are issues that still need to be addressed and there was also a way to show more respect for the men and women that fight for this country.”

The meeting was documented by Shaun King, a senior reporter at the New York Daily News who’s written extensively about racial issues in the United States. The caption accompanying a photo of Kaepernick and Boyer that King posted to Facebook yesterday begins, “Today something VERY special happened that won’t get told unless you share this.” Within 15 hours of being posted, the photo was shared more than 23,000 times.

In his letter to Kaepernick, Boyer evoked his military service to help explain how he came to the realization that the quarterback’s decision to remain seated during the national anthem was justified. Boyer explained how he was inspired to join the Special Forces after witnessing “hate and oppression” during a trip to the Darfur region of Sudan, and that, after initially being upset, he realized that Kaepernick, too, was choosing to fight for what he believes in. De Oppresso Liber, “To Free the Oppressed,” is the Special Force’s motto.

“What you are doing takes a lot of courage, and I’d be lying if I said I knew what it was like to walk around in your shoes,” Boyer wrote. “I’ve never had to deal with prejudice because of the color of my skin, and for me to say I can relate to what you’ve gone through is as ignorant as someone who’s never been in a combat zone telling me they understand what it’s like to go to war.”