Marine veterans Christian Brown and Nick DelCampo have been close friends since they joined the Marines in 2009. They stepped... 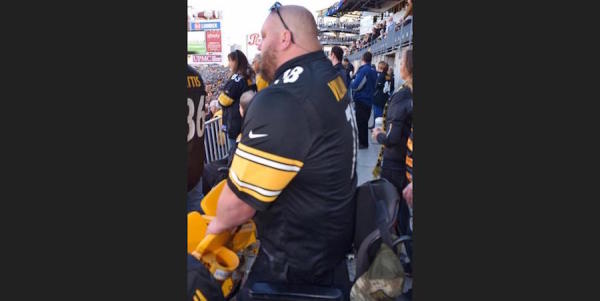 Marine veterans Christian Brown and Nick DelCampo have been close friends since they joined the Marines in 2009. They stepped on the yellow footprints at Parris Island, South Carolina, were in the same platoon when they went through infantry training, and later, were assigned to Weapons Company, 1st Battalion, 6th Marine Regiment based at Camp Lejeune, North Carolina.

Then Lance Cpl. Christian Brown and Lance Cpl. Nick DelCampo pose for a photo during their second deployment to Helmand province, Afghanistan.Photo courtesy of Nick DelCampo

On Dec. 13, 2012, during their second deployment, Brown stepped on an improvised explosive device while leading his squad on foot in Helmand province, Afghanistan. The blast took one leg above the knee, and the other, below the hip. He also lost part of his right index finger.

After Brown’s injury, and throughout his recovery, the two stayed in touch, and in late October of this year, they met up for a wounded veterans deer-hunting trip in Pennsylvania.

While in the area, the two Marine vets were offered tickets to a Steelers and Patriots football game on Oct. 23. When they arrived, they both received signed jersey’s belonging to the Steelers’ offensive tackle Alejandro “Ali” Villanueva, himself a former Army Ranger.

Related: People Doubted This Army Amputee In A Bodybuilding Competition, Until He Took His Shirt Off »

When the national anthem began playing, Brown stood up in his wheelchair, and DelCampo took the photo, which went viral after he posted it to Facebook on Oct. 28.

“When I was standing for the pledge, to me, that was a respectful thing to do today with the defiance in the government, toward police officers, and pretty much toward everything that’s good,” Brown told Task & Purpose, referring to 49ers player Colin Kaepernick, whose decision to sit during the national anthem drew both criticism and praise earlier this season.

“The players, I think their cause and what they want to do is good, but I think the way they do it is completely disrespectful and has nothing to do with the flag.”

When asked how he felt about the photo’s popularity, Brown’s response was self-assured and frank: “I feel good about it,” said Brown, who received the Silver Star in May 2013 for helping carry an injured Marine under fire to a casualty evacuation helicopter during his second tour.

“It doesn’t bother me to share my story or to do the right thing when nobody’s looking, that’s just integrity,” said Brown. “We’re missing a lot of that in today’s society and the millennial generation and the way they act. Somebody’s got to be an example, whether it’s favorable and people like it or not, I’m going to stand for what I think is right and that’s just the way it is.”