15 Things Only POGs Will Understand

Yankees versus Red Sox, dogs versus cats, Coca-Cola versus Pepsi — all these rivalries pale in comparison to grunts versus... 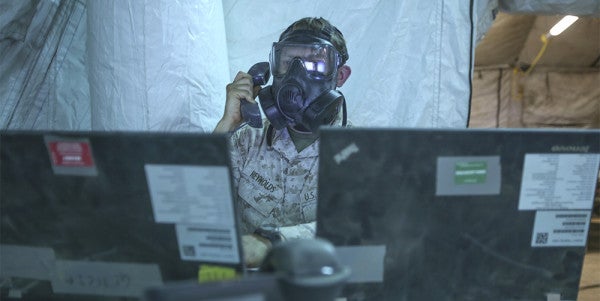 Yankees versus Red Sox, dogs versus cats, Coca-Cola versus Pepsi — all these rivalries pale in comparison to grunts versus POGs.

A colloquialism for infantrymen in the Army and Marine Corps, grunts are the military’s door kickers and trigger pullers, in short, they’re the pointy end of the spear.

Related: Here’s The Grossest, Most POG Thing I’ve Ever Done »

By contrast, the term POG — person other than grunt — refers to non-infantry personnel. POGs provide all the support — from food, chow, ammo, and intel to transportation and air power — that ensures grunts can do their jobs effectively, like take the fight to the enemy.

Grunts and POGs live in two different worlds, and while there’s a lot of things grunts experience that non-infantry personnel will never understand — like how you’re a boot until you have a combat action ribbon or a combat infantryman badge — there’s a few things only POGs can truly understand.

Here are 15 things only the desk jockeys, cooks, admin and supply bubba's can relate to.

1. You’ve heard someone say, “Sorry guys, can’t go out drinking tonight. I'm too busy doing my PMI to get promoted to sergeant in 18 months!”

2. You’ve tried to impress girls at a bar with a story about how you facilitated a payment disbursement despite all the red tape “in country.”

3. To you, sitting in a tent in the barracks parking lot is a field op.

4. There’s at least one person in your unit who has read all the books on the commandant's reading list.

5. You’ve heard someone say: “Yeah, I wanted to go infantry, but my ASVAB was too high.”

8. You know “that guy” who went on one convoy in an MRAP, and tells endless stories back home about his time “outside the wire.” If this doesn’t ring any bells, you might be “that guy.”

9. In the eyes of your staff noncommissioned officer or platoon sergeant, getting a low regulation haircut is the same as not getting one at all.

11. Of course you deserve a Navy Achievement Medal, aka a NAM, (or the Army or Air Force equivalent) for doing your job, don't be silly.

12. You know how to always ace field day inspection.

13. People still think you are a war hero no matter what you actually did in Iraq and Afghanistan. … or Okinawa.

14. You and your roommate have inspected each other’s uniforms before going to the chow hall for fear of getting chewed out by some sergeant hiding just inside the doorway. Also, you only have one roommate.

15. You took corporal's course, got a new MCMAP (Marine Corps Martial Arts Program) belt, and completed a marathon, all while deployed to Afghanistan.