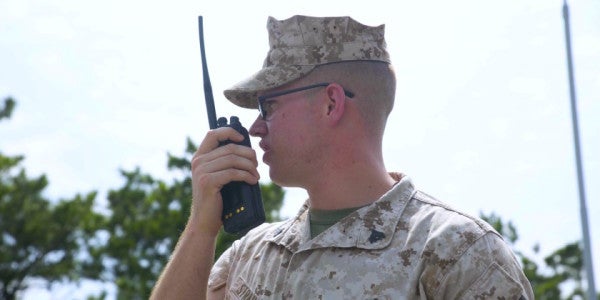 Last week, I asked readers to submit one sentence of U.S. military jargon that makes sense to military personnel yet incomprehensible to civilians. Here are 22 excellent responses.

Vote for your favorite by sending the number to thelongmarch@taskandpurpose.com.

Winner gets a signed copy of one of Tom’s books. Runner-up gets two signed books.

1. Trent Hahn: “Hey shitbird, get your pog dickbeaters off my fucking nods.”

2. James Dickey: “As the INSCOM CHOPS, I promulgated ALARACTS, staffed and published CG directed WARNOs and OPORDs, and served as the primary POC for RFIs from subordinate MIB CDRs.”

4. A Pentagon public affairs round from Dave Moniz: “I dropped the UXO at CHINFO on my way to the POAC at O DARK 30.”

5. Adam Carlson: “Some blue falcon ratfucked the box and only left triple C.”

7. Michael McCoy: “With the NEO CONOP activation and SPMAGTF going hot the DONSA is called off and CCDR needs the FUPLANS OPT to refine the TCP LOE’s, IMO’s, & MOP/MOEs NLT COB today.”

8. William Treadway: “You won’t believe this: A Troop SP’d from COP Sablaghay at 0430 on a MTC, CUOPS reported TIC at 0615, so Squadron FSO and his battle buddy Mike Golf adjusted POF and cleared a ROZ for the pink team to give the on-ground commander rotary fires, but Apache White *still* went black on Class V anyway down at the two-way firing range, so of course, the good idea fairy at the Brigade 4 shop brilliantly ordered a speedball full of Class I *only* and the -60s from Lift dropped them a K from the DZ on some poor SOB’s jingle truck rolling down RTE 1 and now Brigade ADSO says I’ve gotta do the GD AGAR on it!”

9. Linda Adams: “First shirt wants us to doubletime to the AO, so we're picking up 5.56 mike mikes and loading them into Oh-Two for a mission out to Log Base Alpha.”

10. Medical, but incomprehensible at a civilian ER: “The SOCM used two CATs on rapid, and on secondary applied an Asherman to a sucking GSW, gave TXA and FDP, then called a 9-line in record time; all T-Triple-C.”

11. Operational: The ODA was on the ramp for a HALO infil but ISR was CHARLIE FOXTROT, so they were CANX and RTB.”

12. Ben Parry (who says “True story, btw”): “When we first ‘upgraded’ from BCS to AFATDS, oak leaves at DIVARTY were all doing no-handed push-ups, but it needed a piece status or it was all red gum balls in the box, so we couldn't hip shoot and Smoke was all ‘New Fido's a chickenwire canoe.’”

15. Jon Lindley: “Check it out, fuckfaces, Top wants us to un-ass this AO like yesterday, then I need 2 for KP.”

17. Andy Bennett: This is dated from my time in DoD in mid-1990s, and as much civilian as military, but here goes: “We’re going to have an eyewig on de-mining in IFOR to prep for a Burger lunch or a Pickle.”

18. Chris Beyer: “My PCS to the AOC at JBER was such a charlie fox that after using my GTC for TLF, it went delinquent because of a SNAFU with PIPS, and my Shirt went full blue falcon and talked the CC into giving me an LOR.”

19. Jason Gammons: “Tell the CJSOAC LNO that the CONOP that his J5 put together for FARP and Golden Hour for the op scheduled for the next POD is like cat shit on a white hot hibachi.”

20. Jason Gammons: “Tell the 6 shop that if they don’t fix the damn KUS feed for the DCGO’s SA soda straw before BMT then we’re all screwed.”

21. Mike Mariano: “You got 1 mike to pop smoke before I pop a heater 40 mike mike in your fart sack for being low speed with your diggies pog, trackin?”

22. Mark Creaven: “Prepare to commence to begin to start putting on your gear”