Fewer than 3,000 paratroopers made four combat jumps with the 82nd Airborne Division in World War II. Following the death... 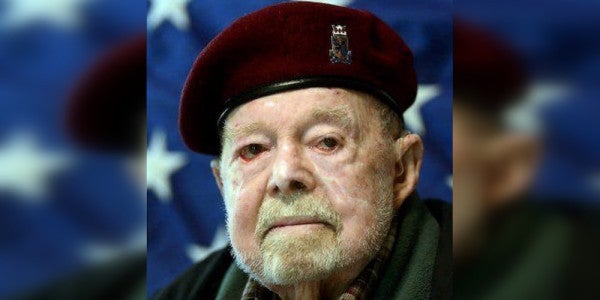 Fewer than 3,000 paratroopers made four combat jumps with the 82nd Airborne Division in World War II.

Following the death of retired 1st Sgt. Harold Eatman, fewer than 16 of those paratroopers are alive today.

First Sgt. Eatman, 102, died Friday at his home in Matthews, near Charlotte, according to the 82nd Airborne Division. He jumped into Sicily, Salerno, Normandy, and Holland during the war, taking part in some of the most famous battles of the European theater.

A spokesman for the division said fewer than 2,800 paratroopers were involved in all four of those combat jumps.

“Harold Eatman was among the generation of All American paratroopers who defeated Nazism, liberated Europe, and inspired many generations of paratroopers to follow,” said Lt. Col. Joe Buccino, spokesman for the 82nd Airborne Division. “We always say that when you wear the Double A patch, you walk among legends. One of those legends has passed.”

(1/3) We are saddened to announce the passing of Ret. 1st Sgt. Harold Eatman at age 102 yesterday afternoon. An original member of the 505th PIR, Harold was among less than 16 living Americans who made all four WW2 combat jumps (Sicily, Salerno, Normandy, Holland) with the 82nd pic.twitter.com/IlV2JsUQ7O

First Sgt. Eatman was an original member of the 505th Parachute Infantry Regiment, which now forms the core of the 82nd Airborne’s 3rd Brigade Combat Team.

He volunteered for the Army in early 1942, shortly after learning of the Japanese attack on Pearl Harbor. He served in Hawaii, first, then re-enlisted to join the brand-new force of paratroopers trained to jump behind enemy lines.

“He heard about this new unit, the airborne, being formed and how tough they were supposed to be,” 1st Sgt. Eatman’s grandson, Michael Kelley, told the Observer in 2015.

In 2015, 1st Sgt. Eatman was one of eight North Carolina veterans recognized for their efforts to liberate France during World War II. The veterans received France’s highest honor, the Legion of Honor.

(2/3) Harold is a recipient of the French Legion of Honor, Bronze Star, Purple Heart, among many others. He inspired 2 more generations of AA Paratroopers, to include his grandson, Sergeant Micheal Kelley, who was severely injured in thee 1994 mid-air collision at Green Ramp. pic.twitter.com/1teHfZFSRj

Kelley, who also served with the 82nd Airborne Division, said his grandfather was an inspiration.

“Some of my first memories of my grandfather are looking through an old, leather-bound edition of Saga, the WWII history of the 82d Airborne,” Kelley said in a statement on Saturday. “I made my first five jumps with his wings in my pocket for luck and he pinned my wings on me at graduation from jump school. My grandfather influenced my whole life.”

“The 82nd is part of my family’s history, and my family is part of the division's history,” he added. “My grandfather was the first paratrooper in my family, but not the last. Myself, my older brother and his son all served in the 505.”

(3/3): Micheal did all 5 jumps with his grandfather's WW2 wings in his pocket. Harold pinned Micheael's wings at graduation.

Micheal told us: "The 82nd is part of my family’s history, and my family is part of the divisions history."

Here is Harold in Naples in October 1943. pic.twitter.com/5r22kwos3C

After World War II, 1st Sgt. Eatman volunteered to stay on active-duty as part of a funeral escort service that transported soldiers’ bodies from Europe to America.

He later joined the 108th Infantry Division, an Army Reserve unit based in Charlotte, where younger soldiers nicknamed him “Pops.”