About 300 paratroopers left Fort Bragg Thursday for Afghanistan. Many of them are part of the 2nd Battalion, 504th Parachute Infantry... 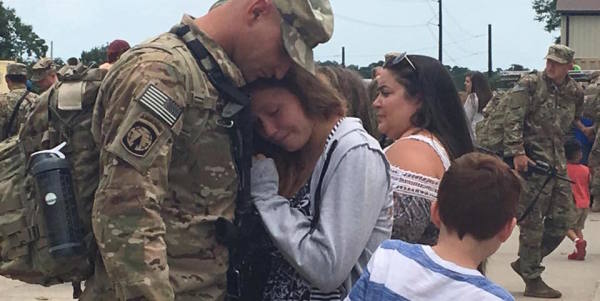 Many of them are part of the 2nd Battalion, 504th Parachute Infantry Regiment, and will be asked to work in a difficult and dangerous environment.

The soldiers are part of a larger group of 1,500 deploying paratroopers from the 1st Brigade Combat Team, 82nd Airborne Division.

They will oversee security at a tactical base and serve as a quick reaction force in Helmand province, where some of the heaviest fighting of the past 16 years of war has taken place.

But Lt. Col. Kwenton Kuhlman, the battalion commander, isn’t worried about the mission.

Kuhlman said the upcoming mission isn’t keeping him or other leaders up at night.

“I’d like to think we’re keeping other people up at night,” he said. “We’re going to win. We’re ready.”

The Devil Brigade has already sent more than 700 soldiers to Afghanistan, where they will serve in a variety of roles across the country, from Kabul to Bagram to Kandahar.

The remaining troops will leave throughout the week, said Col. Tobin Magsig, commander of the 1st Brigade Combat Team.

About half of the brigade combat team is set to deploy, including more than 300 soldiers who left last week for a separate mission in Kosovo.

Magsig said many of the remaining soldiers would stand by at Fort Bragg, ready to serve if military leaders decide they are needed.

He said it was natural for soldiers and their families to be nervous about the deployment, but he said families should feel confident that their soldiers are ready.

“Your Devils in Baggy Pants are well-prepared, well-trained and well-led,” Magsig said, using a nickname the brigade earned in its early history, fighting in some of the biggest battles of World War II.

In addition to the security force mission, 1st Brigade paratroopers also will be called to advise and assist Afghan army and police forces. And they’ll work to protect military and civilian leaders as they travel the country.

Magsig said the goal is to help the Afghans improve their capacity to govern and protect their nation.

Command Sgt. Maj. Robert Cobb, the brigade’s senior enlisted leader, said that mission would not be possible without the family members who soldiers left behind on Tuesday and others like them. When life at home is stable, paratroopers can focus on their mission, Cobb said.

“So, we put a lot of effort into family readiness groups and the rear detachment,” he said.

Cobb said the focus is largely on the families who have not been through a deployment before. The brigade wants to ensure there is a support structure that can help when issues arise.

Magsig said that support is part of the promise the brigade makes to soldiers and their families.

“We’re all about families,” he said. “We’re a family ourselves, and we rely heavily on our spouses and those we love.”

Earlier this month, most of the brigade gathered for the last time ahead of the deployment.

Magsig spoke to the soldiers as battalions cased their unit colors to mark the beginning of their deployment.

About 300 soldiers – from the 3rd Squadron, 73rd Cavalry Regiment – were the first from the brigade to deploy earlier this year. Those soldiers have already assumed their mission in Kabul.

On Tuesday, soldiers chatted with their loved ones as they prepared to leave. Some made final checks of their equipment. Others posed for photos. For many, it was the last time the soldiers were with their families until the end of the nine-month deployment.

“Today is the hardest day,” Cobb said. “You’re emotionally torn between your military family that you’re leaving with and your real family back home.”

Spc. Trevor Moore was one of those soldiers. His wife, Atheena, is eight months pregnant. And this will be his first deployment.

While he’d like to be there for the birth of his son, James, the soldier said he also has a mission to do.

“I’m probably a lot more nervous,” said Atheena Moore. “I understand he has to go.”

The two spent as much time as possible together ahead of the deployment, and they plan to talk as much as possible throughout.

Saying goodbye wasn’t easy for many of the soldiers, regardless of the experience level of the paratrooper.

“You have to pull off the Band-Aid,” Stockard said.

Kuhlman, the battalion commander, said his children, ages 8 and 6, are only now starting to understand why their father has to go overseas. Still, he said he tried to explain the mission in the simplest way possible.