The district’s Afghan police chief and I sat across from each other. He watched the chyron stream silently across his... 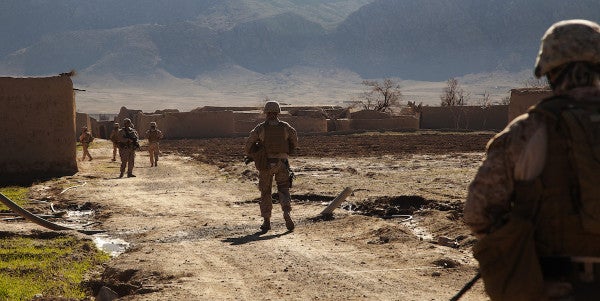 The district’s Afghan police chief and I sat across from each other. He watched the chyron stream silently across his television screen and drummed his fingers on the desk. The interpreter leaned in to tell me it was another insider-attack news story. I looked at our security detail, wearing full kit and carrying his M4 at the low ready. The police chief, whose tribal connections to the Karzai family landed him the job, could barely fit into a uniform — when he chose to wear one. He had passed the morning, like many mornings, drinking tea, receiving guests, and indulging his drug habit. Younger men, sometimes wearing makeup, came and went from his quarters at all hours, and though we had no proof, it seemed unlikely from their sullen expressions that whatever occurred was consensual. I tried small talk to loosen up my partner, but he only grunted single syllabic responses. After a few more moments, he stood up, stretched, and padded wordlessly into his room for a nap. I was a combat advisor, he was my assigned partner, and this was a typical day in 2012.

Recent reporting from theWashington Post indicates that very little has changed since then. Worse, the Department of Defense could be suppressing information to support that fact. Sexual abuse, among other moral lapses, seem part and parcel of the Afghan security forces. Not all units are dens of iniquity, and there are many highly principled and ethical Afghan combat leaders. But the problems are systemic and, by all appearances, widespread. It is no small irony thatMullah Omar launched the Taliban movement as a response to such abuses. In fact, what is more surprising is how little attention the issue has drawn from policymakers given such consistent reporting. Nearly every year since 2002, a major national paper runs a story about thehuman-rights abuses committed by Afghan security forces, which is forgotten by the time the next story runs.

All of this places U.S. service members in a thorny position. Quite a few questions haunt our policies and operations in Afghanistan, but strangely absent are those most central to the success of our advisory effort. Are senior military leaders being honest with themselves about the pervasiveness of these abuses? Our experiences indicate a misalignment of values between U.S. advisors and those they advise. As such, I question whether the efforts to wring success from this 16-year war are worth the cost of undermining our own ethical code.

Before deploying myself in 2012, rumors of child sex slaves circulated among the advisor teams. With constant news coverage, why did the DoD treat this as an open secret? When I asked myself this question, the answer was simple: Supposing DoD did believe the evidence was strong enough to merit denouncing our partners, we had little reason to think it would result in meaningful change. Afghan “good enough” was the operative logic then. Commanders often felt that as bad as some of our partners seemed, the odds of finding someone appreciably better were low. Additionally, the frequency and lethality of Afghan attacks against coalition forces meant that the security of our teams depended on our relationships with the Afghans we advised. In other words, if our Afghan counterpart did not like us, our odds of survival went down several percentage points. We ignored others’ human rights to protect our own because it seemed there was no other option.

To be sure, there are still few attractive policy options in Afghanistan. Patience for expensive and potentially bloody large-scale force commitments runs short and are politically risky. Under the circumstances, the allure of the U.S. security forces advisory teams (SFAT) is obvious. These teams of senior officers and NCOs fan out across the country and partner with the Afghans providing training and advice in an effort to professionalize an inexperienced security apparatus. Small groups of our best service members embedding with Afghan security forces, passing on their hard-won experience to their partners sounds like it could work. It seems low cost. It seems low profile. It seems to address the root of the strategic problem. Add a dash of air power, remain patient for just a little longer, and we’ll see our efforts begin to bear fruit. Some officials appear convinced of this, but the same problems remain, and if anything, it Afghan security forces have less control within their borders than in 2012. The fatal vulnerability of the advisor project in Afghanistan is that it depends on the establishment of trust between U.S. forces and those they advise, but trust cannot flourish when people do not agree upon certain fundamental values.

The Taliban have exploited this to great effect. Nowhere is this more apparent than in the Guardian Angel protocol.Guardian Angels are U.S. soldiers who loom in doorways or corners wearing body armor with their rifles trained in the direction of the Afghan partners, while advisors attempt to mentor their partners. After the first wave of green-on-blue attacks, this became a theater requirement. What could be more absurd than coaching someone while a soldier stands ready to kill them or anyone else who enters the room? The dilemma is obvious. Securing advisors mitigates the risk of green-on-blue attacks, which the Taliban effectively leverage to erode morale, but undeniably makes it more difficult to build any trust between advisors and their partners.

Officers and strategists, with years of experience in Afghanistan, have deceived themselves and, by extension, the civilian policymakers they advise.It’s understandable how we arrived in such a condition. We’ve invested much, lost friends, and believed fervently in the nobility of our cause. Our raison d'etre is to win the nation’s wars and affect positive change in Afghanistan. And yet, the only thing changing in Afghanistan might be us. Each overlooked moral lapse in our partners makes the next equivocation easier. We are forced to tolerate drug use among the Afghan security forces because it is so pervasive. We prevaricate on corruption and say that it’s patronage — a cultural fact on the ground. For 16 years, we have punted action against abuse to the Afghan courts, knowing them to be ineffectual. After operating in such moral ambiguity, I fear we’ll lose our own moral anchorage.

All this self-deception calls for a reckoning. The Pentagon must confront itself and re-evaluate the suitability of advising in Afghanistan. We owe ourselves an honest appraisal of the moral costs of advising. And, above all, we have a responsibility to policymakers and elected officials who underwrite the advisory project to describe the lurid details of moral disparity between our advisors and their partners.

A U.S. Combat Advisor has partnered with and advised security forces in Iraq and Afghanistan and served at the division, brigade, and battalion headquarters level. He remains on active duty and lives with his wife in Georgia.