Editor’s note: This is a dispatch by T&P; correspondent Marty Skovlund Jr., reporting on the ground from Afghanistan. “These guys... 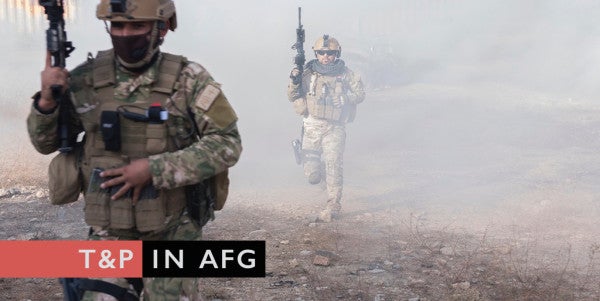 Editor’s note: This is a dispatch by T&P; correspondent Marty Skovlund Jr., reporting on the ground from Afghanistan.

“These guys are tier one,” said the NATO soldier-advisor, speaking on background. “They could easily compare to any special operations unit in Europe.”

That’s a bold claim to make, but especially when referring to a unit comprised almost entirely of Afghan policemen. But with top-shelf advisors from over nine NATO nations and years of combat experience under their belt, the members of the General Command of Police Special Units (GCPSU) have risen to a level that has stood in stark contrast to the reputation earned by Afghan police forces for corruption and ineffectiveness.

The GCPSU, more commonly referred to as “The Triples,” are an elite Afghan police unit responsible for responding to high-profile attacks and conducting high-risk arrests, crisis responses, and counter-narcotics operations. The organization as it stands today was formed in 2009, but has roots that go all the way back to 2002 when its sole focus was counternarcotics missions. They are paramilitary in nature — comparable to the FBI’s Hostage Rescue Team or Germany’s infamous Grenzschutzgruppe 9, a top-tier police federal police in Germany.

The GCPSU are comprised of three operational units — CRU 222, CF333, and ATF 444 — as well as an intelligence cell and a training directorate, each responsible for a large but separate portion of the country. It’s a long road if you want to become an operator in the Triples. Training lasts nearly an entire year and is broken down into four phases: Phase one is 16 weeks of basic and foundational skills; phase two is eight weeks long and is called the National Unit Operators Course; phase three is 24 weeks long and reinforces previous training on urban fighting, medical skills, helicopter assaults, explosive breaching, and arrest techniques. The final phase is a cohesive unit training cycle before the unit is considered fully operational.

During the course of their training, future operators are expected to learn a variety of skills: Afghan law as it pertains to arrests and use of warrants; police skills such as conducting body searches, use of force, and sensitive site exploitation; and weapons proficiency in conjunction with laser-aiming and night-vision devices. Operators can then attend specialty courses like sniper training, advanced medical training, or explosive ordnance disposal. The result is a highly capable operator ready to respond to some of the most dynamic and fluid situations in the entire country.

And that’s exactly what they do. For example, on March 7, 2017, ISIS-K attacked the Wazir Akbar Khan Hospital in Kabul. The assault was initiated with an IED and followed by an onslaught of small-arms fire. CRU-222, considered by many to be GCPSU’s most formidable unit due to it being the original unit on which the command was built, responded almost immediately. The unit conducted a breach of both the ground floor and roof and cleared all eight stories while rescuing the patients and employees trapped inside the building. One operator was killed along with three others who were wounded; all enemy combatants were killed in action. Unfortunately, it was still a catastrophic attack that left over 38 civilians dead.

The GCPSU has conducted 1,591 operations since May 2015, with only 148 of those requiring NATO assistance or advisors. Many of those missions were successes that turned into high-profile events that caught the media’s attention. Due to that progress, Afghan President Ashraf Ghani ordered the command to double its strength by 2020. That’s a daunting task, but there’s a plan in place to accomplish this goal by forming National Mission Units 555, 888, and 999 and partnering each of them with the three existing units.

Of course, the expansion won’t solve the internal problems the unit is currently facing. Logistical support has been the scourge of every SOF unit in the country — the Triples are no exception. They are competing for the limited air assets from Special Missions Wing, Afghanistan’s special operations aviation unit, with the other Afghan special operations units. The elite units also complain of being misused and allocated for missions outside or below their scope of operations, a complaint that is common to almost every elite unit in the world. Finally, NATO advisors in the Special Operations Advisory Group have had to stress the need for tactical patience and setting conditions conducive to success on missions; the Afghan operators can sometimes be too eager to get to a target despite unfavorable conditions.

According to one Afghan GCPSU official speaking on background, much of the credit for the Triple’s success so far is owed to the NATO advisors who have helped the unit train to international standards and supply them with cutting-edge technology, gear, and weapons appropriate for their mission. The official emphasized that they will continue to need help into the future, especially with the expansion they are currently undergoing.