2 US Troops Killed In Convoy Ambush In Afghanistan

Two U.S. service members were killed in an attack on a NATO convoy in Kandahar, Afghanistan, on August 2, Reuters... 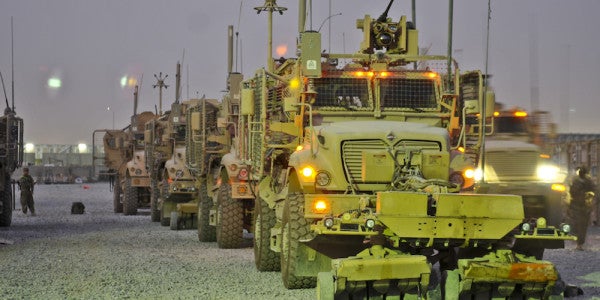 Two U.S. service members were killed in an attack on a NATO convoy in Kandahar, Afghanistan, on August 2, Reuters reports.

Reuters previously reported that a suicide bomber had targeted a convoy of troops near Kandahar International Airport with a vehicle-borne IED.

An ORS official told Task & Purpose the convoy was on a routine train, advise and assist mission with Afghan security forces at the time of the attack.

Resolute Support can confirm that a NATO
convoy was attacked this afternoon in #Kandahar . pic.twitter.com/gwRfMGBjLq

The deaths were the second and third fatalities announced by the Department of Defense on August 2. Representatives of Operation Inherent Resolve announced that another service member was killed in a non-combat related incident in Kuwait that same day.

Fox News notes that the ambush occurred just days after attackers armed with “stick bombs” and a car bomb broke down the gates of the Iraqi Embassy in the Afghan capital of Kabul and executed “numerous” guards on July 31.

There are currently 8,400 U.S. military personnel operating in Afghanistan as part of the U.S.-led effort to beat back the Taliban insurgency that’s roiled the country since the end of NATO combat operations there in December 2014.

This is a developing story. We will update this post with more details as they become available.