An unknown number of U.S. special operations forces have surfaced in a Kurdish-controlled city in northern Syria near the Turkish... 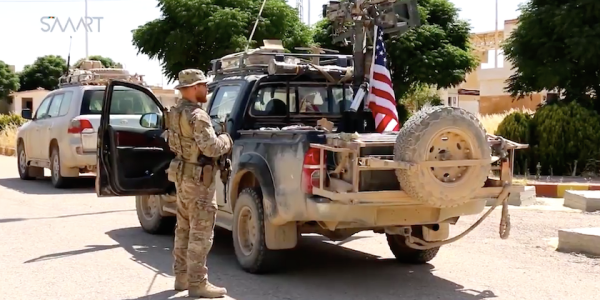 An unknown number of U.S. special operations forces have surfaced in a Kurdish-controlled city in northern Syria near the Turkish border as the U.S.-led coalition struggles to prevent the war against ISIS from escalating into a full-blown regional conflict, Military Times reports.

A video posted to social media by @AfarinMamosta, an avid chronicler of the Syrian civil war with a large Twitter following, on June 28 appears to shows American troops in Tal Abyad, a city held by the Kurdish People’s Protection Units, or YPG, since the militia seized it from ISIS with the help of coalition airstrikes in 2015.

In the video, U.S. troops are driving machine gun-mounted pick-up trucks, or technicals, affixed with large American flags. Their arrival coincides with an uptick in cross-border skirmishes between the YPG and Turkish troops who have been amassing in northern Syria over the past week, joined by proxy forces fighting under the banner of the Free Syrian Army.

Both the Syrian Observatory for Human Rights and a spokesperson for the YPG told Military Times that there has been shelling in the area in recent days.

“This is a response to the Turkish forces who want to enter this area,” a man in the video says, presumably referring to the arrival of the American troops.

The Turkish government considers the YPG a terrorist organization and, despite their status as a key NATO ally in the region, Turkish forces now seem more focused on fighting the Kurds than on contributing to the campaign to destroy ISIS, which entered a crucial phase three weeks ago when coalition-backed local forces, including members of the YPG and its all-female wing, the YPJ, entered the terrorist stronghold of Raqqa.

As the fight in Raqqa rages on, it’s becoming increasingly clear that not all of the major players in the Syrian Civil War, which erupted from a peaceful protest movement in 2011, see the defeat of ISIS as their primary goal. In southern Syria, along the border of Iraq and Jordan, Iranian-backed militants loyal to the regime of Bashar al-Assad have repeatedly tested the deconfliction zones surrounding the Tanf Garrison, which houses anti-ISIS Syrian fighters and their U.S. and British advisors, each time eliciting a swift and brutal response from the coalition.

Meanwhile, the Trump administration’s recent decision to arm the YPG threatens to create similar tension between Turkey and the Kurds in the north of the country. That decision has frayed Washington’s relationship with Ankara, and seems to have added more urgency to Turkey’s ultimate mission of preventing an autonomous Kurdish state from being established just south of its border. The Turkish government considers the YPG an extension of the Kurdish PKK, an organization designated a terrorist group by the United States, the European Union, and Ankara. The PKK has been waging an insurgency in southeastern Turkey for decades.

Whether a small number of U.S. troops is enough to deter Turkish forces from entering Tal Abyad and the surrounding region remains to be seen, but so far efforts to quell Turkey’s fears through diplomatic means have proved futile. When coalition officials offered a weak pledge  to track and eventually take back all of the weapons doled out to the YPG, Turkish President Tayyip Erdogan responded: “The ones who think they are tricking Turkey by saying they are going to get back the weapons that are being given to this terrorist organization will realize that they are making a mistake eventually.”

Erdogan added that any country arming the YPG would ultimately “pay for any bullet that will be fired on [Turkey], for every drop of blood that will be shed,” according to Reuters. He was, of course, referring to the United States, whose troops are now all that seem to be standing between Turkish troops and the YPG.

The scene captured in the video harkens back to the arrival of U.S. Army Rangers in the Syrian village of Manbij in April following threats from Turkey to eject any Kurds who remained in the village after ISIS was flushed out. The Rangers, whose mission was to keep the peace, arrived in a convoy of Strykers, each outfitted with a large American flag. Peace was maintained.

But Washington’s relationship with Turkey is more strained now as the U.S.-led coalition appears to have settled on the YPG as its most vital ally in the fight against ISIS. Secretary of Defense Jim Mattis suggested on June 27 that the U.S. may continue to arm the Kurds after the battle of Raqqa.

“We have a small number of special operations forces that continue their train, advise and assist mission throughout northern Syria, but we are not going to discuss the location or number of U.S. special forces for operational security and force protection reasons,” U.S Central Command said in a statement to Task & Purpose, responding to several questions.

But CENTCOM didn’t answer the most important question: What happens if Turkish troops actually fire on Americans?

This may have already happened: Jenan Moussa, a Middle Eastern news correspondent for Dubai-based Al Alan TV, concluded an interview with U.S. Special Presidential Envoy for the Global Coalition to Counter ISIS Brett McGurk by announcing on Twitter that she was told by “reliable sources” that the Turkish army has fired “various times” in the direction of U.S. troops stationed along the border.

“[They] weren’t hit by Turkish small arms fire,” Moussa wrote. “But message from Turkish side was clear.”