The Coalition Just Discovered This One Weird Trick To Defeating ISIS

When U.S.-backed Syrian Defense Forces wanted ISIS fighters to leave a strategically significant city on the road to the Islamic... 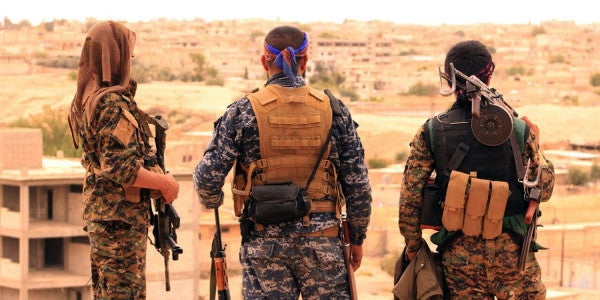 When U.S.-backed Syrian Defense Forces wanted ISIS fighters to leave a strategically significant city on the road to the Islamic State’s capital, they employed an unexpected tactic: They asked.

On May 10, the ISIS fighters did something unexpected in response: They agreed.

That’s the upshot of the Battle of Tabqa, a city whose dam — Syria’s largest — had been laden with explosives by ISIS dead-enders, to be blown if their situation got dire. Syrian Defense Forces had besieged the city since advancing on it in a U.S.-led airborne operation in March.

They got another boost last week, when the U.S. approved controversial weapons shipments to Kurdish YPG militia members, who are fighting under the SDF umbrella.

Faced with encirclement and near-certain “martyrdom,” Islamic State’s gun-toters in Tabqa didn’t exactly hunker down and prepare to meet their maker.

Instead, they negotiated an “unconditional” surrender to save their tails, according to defense officials who spoke to Buzzfeed’s Nancy Youssef:

ISIS agreed to remove explosives from around the dam and leave its heavy weapons behind, a US official explained…

A statement put out by Operation Inherent Resolve Wednesday called the end of the battle a “forced withdrawal” but didn’t spell out the details of how it came about. Instead, the release focused on the humanitarian aspect of the withdrawal: “The SDF accepted ISIS's surrender of the city to protect innocent civilians and to protect the [Tabqa] dam infrastructure which hundreds of thousands of Syrians rely on for water, agriculture, and electricity.”

It is unclear how many ISIS fighters died during the battle of Tabqa.

How many ISIS fighters died in Tabqa? Enough that the survivors wanted to live to see another season of “The Apprentice,” apparently. But whatever the circumstances, blowing Tabqa’s dam on the Euphrates River could have spelled widespread humanitarian disaster, and now that’s not gonna be a thing.

National security analysts are already trying to play four-dimensional chess with this new ISIS tactic of surrendering. What could it portend for the upcoming battle royale to liberate Raqqa, the Islamists’ nearby capital? It seems to undercut their brand as a global caliphate bursting forth with disciplined shaheeds ready to sacrifice themselves for the cause at a moment’s notice.

But the group’s unpredictability — and the probable magnitude of the U.S.-led coalition’s upcoming siege on Raqqa — suggest that its fighters might give up ground now for another chance to feel the morning sun on their faces… er, I mean, for a longer asymmetric struggle.

“ISIS intends to lose the terrain in such a way that the population is more tolerant of ISIS over time,” Jenny Cafarella of the generally hawkish Institute for the Study of War told Buzzfeed. “The fall of Raqqa doesn’t mean ISIS is on its heels, especially if ISIS chooses to abandon the city to preserve strength.”

So they’ll melt away like the insurgents of yore, biding their time… or just enjoying one more day of lead-free, extra-surrendery existence. Either way, here’s hoping they steer clear of wild boars.