Did The US Military Just Invade Syria?

Several days ago, a convoy of U.S. troops was spotted crossing the border into Syria from Iraqi Kurdistan. The convoy,... 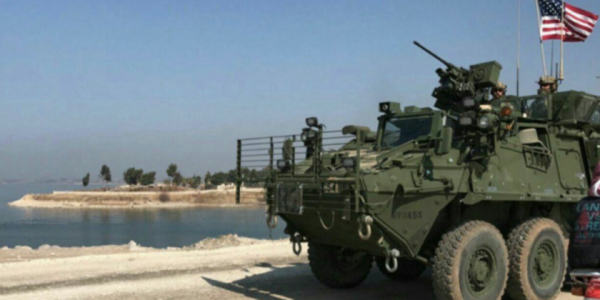 Several days ago, a convoy of U.S. troops was spotted crossing the border into Syria from Iraqi Kurdistan. The convoy, comprised mostly of hulking Stryker armored fighting vehicles, was en route to the Syrian village of Manbij, which was recently liberated from ISIS. It’s the most overt U.S. military action on the ground in Syria to date. In fact, each vehicle in the convoy was outfitted with a large American flag. The soldiers were meant to be seen. It didn’t take long for photos to surface on the internet, and the Department of Defense was prepared with an explanation.

According to Navy Capt. Jeff Davis, a Pentagon spokesman, the soldiers were deployed to Syria to keep peace among the myriad militias and other forces who have temporarily set aside longstanding feuds to focus on repelling ISIS from Manbij. “It’s a visible reminder, for anybody who’s looking to start a fight, that the only fight that should be going on right now is with ISIS,” Davis told the Associated Press.

Until now, the American mission in Syria has been limited to training, advising, and equipping local forces, and the occasional clandestine raid. But the troops who just arrived in Syria do not specialize in standing up or bolstering indigenous armies (a mission set known as Foreign Internal Defense, which is exclusive to certain units under the military’s Special Operations Command). They’re not Green Berets, or Navy SEALs, or MARSOC Raiders. They are members of the U.S. military’s premier raid force — the 75th Ranger Regiment.

N. #Manbij: US reinforced their presence with Stryker IAVs on S. side of Sajour River bordering with #EuphratesShield territory. pic.twitter.com/hkJqF0TsQr

The Rangers have a storied history of spearheading brazen offensives behind enemy lines. In 1989, the entire 75th Ranger Regiment — which is currently composed of four battalions — parachuted into Panama the day before the bulk of conventional U.S. military forces arrived on the ground. Several years later, 3rd Ranger Battalion fought a savage 18-hour battle alongside Delta Force in Mogadishu — an event immortalized in Ridley Scott’s “Black Hawk Down.” Immediately following the Sept. 11 terrorist attacks, members of 3rd Battalion parachuted into Kandahar during the invasion of Afghanistan, and on March 28, 2003, 3rd Battalion executed the first airborne assault in Iraq.

Simply put, Rangers take the fight to the enemy. You can read all about it in the section dedicated to them on the website for the U.S. Army Special Operations Command, which oversees the 75th Ranger Regiment. “Their capabilities include air assault and direct action raids seizing key terrain such as airfields, destroying strategic facilities, and capturing or killing enemies of the Nations,” it reads. “Rangers are capable of conducting squad through regimental size operations using a variety of infiltration techniques including airborne, air assault, and ground platforms.”

The Rangers who entered Syria in a convoy of those “ground platforms” were identified by Jack Murphy, the editor-in-chief of SOFREP, a subscription-based website that covers U.S. military special operations from an insider’s point of view. Murphy, a former Ranger himself, was able to identify the Rangers as members of 3rd Battalion by the callsigns plastered on the backs of their vehicles; in doing so, he sparked outrage (of the Facebook and Twitter variety) from people in the special operator community who believe he violated the classified information non-disclosure agreement that all operators sign when they leave Special Operations Command.

But, hey, the cat is out of the bag. There are Rangers in Syria. Their mission, the Pentagon says, is temporary, although no specific time frame has been provided. And the mission is to keep the peace in a village that was just cleared by local forces, aided by U.S. special operations troops and American bombs. Threatening that peace is a multiplicity of armed groups that don’t normally get along — including Russian-backed Syrian regime forces, Kurdish rebels, and an American-backed coalition of Syrian Arabs. According to the AP, the Turkish government has vowed to eject any Kurds who remain in Manbij by force if necessary. And of course, ISIS and its sympathizers may still lurk in the battle space, as well.

Clear and hold, clear and hold, clear and hold — if that phrase looks familiar, it’s because it was the core counterinsurgency strategy employed by the U.S. military in Iraq and Afghanistan. The premise is simple: soldiers clear a city or village of insurgents and then a residual force hangs around to keep the peace and win over the local population. The tactic was used in Baghdad, Fallujah, Ramadi, Mosul, Kandahar, Kunar, and just about every other insurgent hotbed that claimed the lives of American soldiers during the wars. Many of those soldiers were killed long after the “clear” phase of the operation was over. Now, it seems, the Rangers are playing the role of the residual force.

The Rangers, however, aren’t known to stay in any one place for long. They’re usually in and out. According to one former Ranger, who asked not to be named to avoid being accused of violating the NDA he signed when he left Regiment, 72 hours on the ground is “all they are trained or equipped to do.” He added: “Haditha Dam was a week, but that one of the longest of the entire war.”

So what happens when the Rangers leave the objective? Well, when the goal is to ensure peace in a key area of the battle space — which Manbij certainly is — the Rangers typically hand the objective off to a conventional infantry unit, like the 82nd Airborne (which is currently deployed to Iraq). Then the Rangers move on. In this case, they’d probably head east, toward the ISIS stronghold of Raqqa.

The U.S. military is now fully invested in the war against ISIS. In northern Iraq, American forces have the benefit of clear battle lines and the fact that friendly Kurds control the road that connects Mosul with Erbil, where the U.S.-led coalition is headquartered. In Syria, however, the logistics are a lot trickier. The presence of competing armed groups and a beleaguered central government mean that any ground taken on the way to Raqqa must be held to prevent infighting. And the arrival of the Rangers in Manbij seems to indicate that the U.S military is willing to hold it. More troops will follow them across the berm.