No, Trump Isn’t Going To Pull Out Of Syria. But Would That Be So Terrible?

President Donald Trump has signaled that he wants the U.S. to completely pull out of Syria. While that lofty goal... 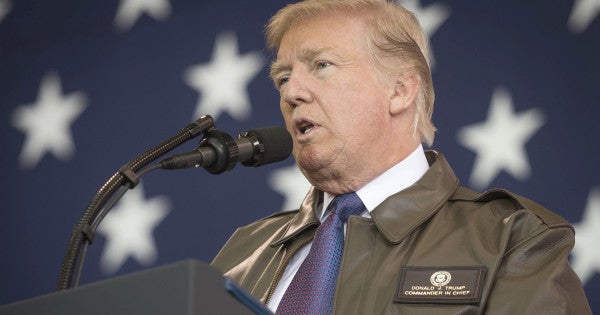 President Donald Trump has signaled that he wants the U.S. to completely pull out of Syria. While that lofty goal will probably be walked back in the coming days, I wonder: Would that actually be so terrible?

Here's the context: According to The Washington Post, Trump instructed the Pentagon to start planning for a withdrawal from Syria, but no date has been set. Interestingly, some on the left and in media circles immediately criticized this as being a “gift to Russia.”

Now I really don't believe that Trump is going to rid Syria of all U.S. forces. Just like he's done in the past, he has said what he wants, but will likely end up deferring to his generals.

More likely, he can succeed in removing conventional troops from Syria — the Marine artillerymen and standard Army infantry units operating there — while keeping in place some special operations forces and intelligence, surveillance, and reconnaissance assets.

That sounds fine to me.

Back in 2014, the U.S. military sent troops into Syria and Iraq with a clear goal: Work by, with, and through regional partners to militarily defeat ISIS. That's it. That's all we were supposed to do.

And we've completed the task. ISIS's capital city of Raqqa has fallen, and the group is, for the most part, wiped out. Much like al Qaeda, it will likely morph into a decentralized cell structure that can never be fully eradicated.

Now I ask of all the armchair quarterbacks out there: What instead? Rather than immediately criticizing the president for wanting out of one of the many countries the U.S. has its military in, answer: What next?

Are we supposed to fight Iran there?

Are we supposed to fight Russia there?

There are no good answers here. Even before we became involved in this fight, we knew that the U.S. couldn't solve the Syrian War. Just because we have good intentions and want something to happen doesn't make it so.

But we knew we could get rid of ISIS. And we have.

So let's bring some of our troops home. That doesn't mean all of them. SOF and drones supporting the regional partners can help prevent the return of ISIS. Or if you think we should keep them there, take some time to think about how this all plays out.

In my view, keeping conventional forces around so they can find improvised explosive devices with their feet strikes me as something we should end, especially after 17 years of war in the Middle East. But that's just me.