If there were lingering questions whether U.S. ground troops would play a frontline role in the assault to retake Raqqa,... 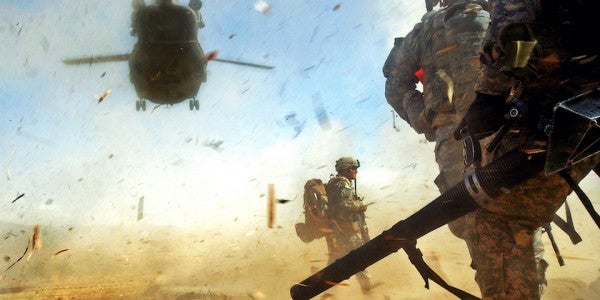 If there were lingering questions whether U.S. ground troops would play a frontline role in the assault to retake Raqqa, the Islamic State’s de facto capital in Syria, they can be laid to rest now.

A fleet of U.S. helicopters carrying about 500 Syrian fighters and their U.S. advisors flew into ISIS-held territory March 22 to begin the first major phase of the Raqqa offensive. The move marks the first time American soldiers have conducted an air assault with local forces in Syria, CNN reports.

Backed by Apache helicopters and Marines firing M777 howitzers, the U.S. advisors and their Syrian allies were tasked with securing a dam 25 miles west of Raqqa, which has been under ISIS control since 2013, as well a nearby village and airfield. Army Col. Joseph Scrocca, a coalition public affairs officer, called it a “daring assault behind enemy lines.”

“The [Syrian Democratic Forces] and our partners there are facing a pretty heavy fight,” Scrocca said. “That’s what makes this type of operation so daring. I think we were lucky we caught ISIS by surprise. They are still reacting to this maneuver.”

“Hundreds” of “foreign fighters” — a term often used to describe members of ISIS, which recruits heavily from abroad — are still in the area, according to Scrocca, and weeks of tough fighting likely remain ahead.

This is likely the first of more battles to come as U.S. troops and their Syrian allies press on toward their primary objective. Securing the dam, Scrocca explained, “is critical for the isolation of Raqqa and the next step toward an annihilation of ISIS in Syria.” So far, there is no information to suggest that a contingent of American troops will remain at the dam to keep the peace once it’s secured, as a company of Army Rangers did in the Syrian village of Manbij after it was wrested from ISIS control several weeks ago.

Raqqa, which is located in northeast Syria on the banks of the Euphrates River, has been transformed into a virtual fortress under ISIS. A U.S. official told CNN that intelligence indicates “the city is laced with trenches, tunnels, roadside bombs, and houses and building wired to explode.” The anti-ISIS coalition has faced similar threats in Mosul, over the border with Iraq.

While the loss of their last remaining stronghold would be a devastating blow, ISIS began as an insurgency and could very easily reassume that role. The Pentagon seems to be preparing for that. Earlier this month, a U.S. official told reporters that “Raqqa will probably not be the final battle against ISIS.”

Related: Conventional US Ground Troops May Be Destined For The War In Syria »

If the U.S. military is on a mission to “demolish and destroy” ISIS — as President Donald Trump recently vowed to do — the U.S.-led wars in Iraq and Afghanistan may offer a general idea of how that effort will unfold. Both wars began with the defeat of big armies and quickly devolved into bloody counterinsurgencies that are still grinding in earnest today.

Defense Secretary James Mattis, who, like the president, has called the 2003 invasion of Iraq “a mistake,” told Congress on March 22 that he supports a new “Authorization for Use of Military Force” to fight ISIS. “The elected commander-in-chief, both the last administration, and the current administration, I think have a duty to protect the American people and what we stand for from this enemy,” Mattis said.

Mattis added that he doesn’t support time or geographic limits on any war authorization. Without those limits, the Pentagon could pursue ISIS wherever it goes and fight for as long as is necessary to “demolish and destroy” a terrorist organization that has a vast network of global supporters and, in addition to Iraq and Syria, affiliates in Egypt, Saudi Arabia, Libya, Nigeria, Afghanistan, and Yemen.

The United States, in other words, might be in for a long campaign.