As a young man, Bob Barger saw a Navy recruiting poster in downtown Toledo that changed his life. It showed... 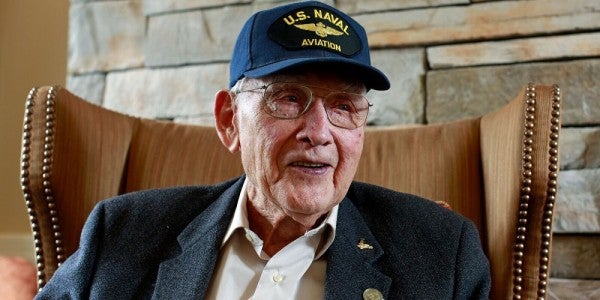 As a young man, Bob Barger saw a Navy recruiting poster in downtown Toledo that changed his life. It showed a guy standing on an F4U Corsair and said, “Join the Navy and get an education.”

“I guess it was good publicity because it sure worked for me,” Barger told Task & Purpose. You know, eventually.

At 96 years old, the former Navy aviator and World War II veteran will finally see the recruiting poster’s promise fulfilled when he graduates from the University of Toledo on May 5. He is believed to be the oldest University of Toledo graduate, according to the university.

“I am now a college graduate looking for a job,” Barger said. “I’ve got a resume out already. “I am on Medicare and I don’t need a pension or anything, so I’d be very cheap labor.”

Barger joined the Navy in 1940 and completed aviation cadet training. During the war, he flew Kingfisher observation planes over the Gulf of Mexico and later became a naval flight instructor. He attended the University of Toledo after the war but he needed to work to support his family, so he left college in 1950 without a bachelor’s degree.

Barger told Task & Purpose that he never expected to get a degree after leaving school, but then he met Haraz Ghanbari, an Army veteran and an officer in the Navy Reserve, who serves as the University of Toledo’s director of military and veteran affairs.

“It’s not what you know; it’s who you know, and a young man by the name of Haraz Ghanbari came through for me,” Barger said.

In 2013, Barger officiated Ghanbari’s promotion to lieutenant and shortly afterward he told Ghanbari that he had never graduated from the University of Toledo.

Ghanbari told Task & Purpose that he asked the university to review Barger’s transcripts and it was determined that Barger had more than enough credits for an associate’s degree, which was not available to students in 1950.

“Bob earned this degree,” Ghanbari said. “It was a simply a matter of me going back into the archives and requesting his transcripts to be reevaluated. It’s just been a tremendous honor to know Bob these last five years and I’m really excited to be at graduation with him. On Saturday, I’ll be escorting him up on the stage to his receive his diploma.”