McCain Has To Stand With Veterans, Not For-Profit Colleges

Last year, the Department of Defense took a bold move against the University of Phoenix, placing the nation’s largest for-profit... 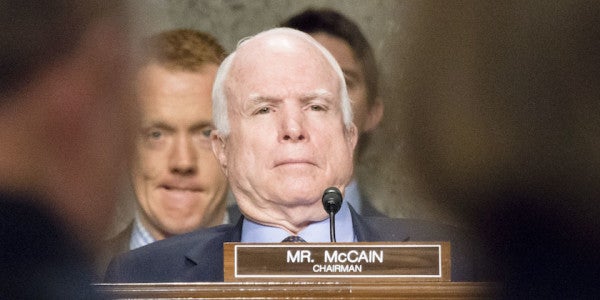 Last year, the Department of Defense took a bold move against the University of Phoenix, placing the nation’s largest for-profit college on probation and putting tuition assistance for active-duty students at the school at risk. This gave the rest of the for-profit education industry notice that the DoD was not going to stand idly and let those institutions exploit veterans.

But Phoenix’s DoD probation only lasted three months. As a big company, it’s a special interest all its own, and has high-powered politicians like senators John McCain and Lamar Alexander in its corner. McCain, publicly praised DoD’s retreat, has been a particularly staunch defender of the for-profit education industry, defending even the notorious ITT Tech in the wake of its loss of federal education dollars. Perhaps his stalwart defense of these companies has something to do with the fact that he is Congress’ leading recipient of for-profit-college campaign contributions.

The coziness of McCain and others with for-profit college operators matters, because so many of these schools exist primarily on the backs of veterans, and the outcomes for veterans at these schools are generally poor. If the DoD couldn’t hold a single bad actor accountable before the latest election, it is even less likely to after.

The VA, supposedly the veterans’ advocate in the U.S. government, didn’t even do as much as the DoD. To this point, its only significant action to protect veterans has been to put flags on some suspect colleges in its online GI Bill Comparison Tool.

That post-9/11 GI Bill is perhaps the biggest improvement in veterans’ benefits since the end of World War II. Its benefits — 36 months of college tuition, plus a housing allowance — provide truly life-changing money to help vets get college educations. This is where the miracle of the free market was supposed to create a win-win; where educational entrepreneurs created flexible programs that give vets (usually “non-traditional students” with families and jobs) valuable job skills while earning a fair profit as reward.

Related: Stop Throwing Away Your GI Bill With That Online College »

Unfortunately, the post-9/11 GI Bill golden egg was just too big of a payday for shady operators to ignore. Because of the way federal financial aid requirements are structured, getting GI Bill students to attend a particular school allows it to evade a rule that a school has to get at least 10% of its revenue from private funds to be eligible for other federal aid. The GI Bill counts as private funds for this purpose. Many for-profits have a hard time reaching that 10% threshold on their own, encouraging them to aggressively, and often unethically, market themselves to vets.

For-profit schools have pulled out all the stops to enroll military students, using questionable marketing techniques and lying about things like graduation rates and job placement. Some even recruited vets known to have traumatic brain injuries from wounded warrior units and military hospitals without making any necessary accommodations for those students. One such student described in a Senate report on the issue “knows he’s enrolled … he just can’t remember what course he’s taking.”

These schools, which commonly cost far more than community and state colleges, use up veterans’ benefits, while the vets themselves often do not graduate, find themselves in debt, or are left with worthless degrees.

While McCain is the biggest recipient of for-profit school campaign contributions, he’s not the only one beholden to dollars over veterans. The list of top recipients of for-profit school campaign money this past year reads like a bipartisan political who’s who of prominent senators and congressmen. One could say that Congress has been asleep at the switch when it comes to protecting veterans from for-profit colleges, but that would ignore the fact that too many of them are actually active proponents of these schools.

It’s up to veterans, veterans service organizations, and their allies to insist Congress and the VA take steps to ensure the benefit money it spends is actually benefiting veterans, not just profit margins. McCain is right on a lot of veterans and military issues, but not on this one.

The biggest step that Congress could take is to include the GI Bill as federal student aid money when the “90/10” rule is applied. Counting the GI Bill the same as normal student aid would put veterans in the same financial category as most other students, not just marks for for-profit school con men. Not surprisingly, the for-profit education lobby and its advocates in Congress strongly oppose any changes to the current 90/10 rule whenever they’re proposed.

McCain and his Senate and House colleagues on both sides of the aisle have a decision to make: whether they are on the side of veterans or educational con men.