To commemorate the 76th anniversary of the infamous attack on Pearl Harbor, President Donald Trump and Vice President Mike Pence... 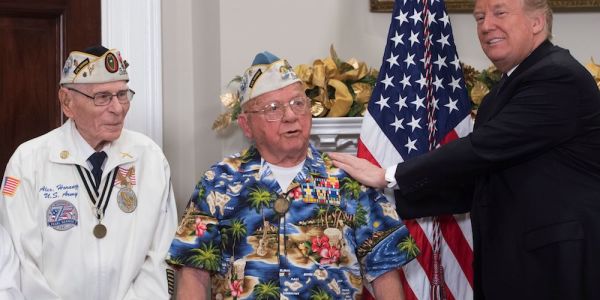 To commemorate the 76th anniversary of the infamous attack on Pearl Harbor, President Donald Trump and Vice President Mike Pence were joined by a group of World War II veterans to sign a presidential proclamation declaring Dec. 7 National Pearl Harbor Remembrance Day, commemorating the 2,300 service members who lost their lives during the Japanese surprise attack on the Hawaii naval station in 1941. And while Trump has occasionally put his foot in his mouth during military-related ceremonies — I wouldn't necessarily call a surprise bombardment “a pretty wild scene” — nobody was paying attention to the commander-in-chief.

After Trump reminded spectators assembled at the White House to “remember Pearl Harbor,” one of the five World War II vets who had joined the commander-in-chief, retired Senior Chief Quartermaster Michael “Mickey” Ganitch, burst into song:

Ganitch, who was assigned to the USS Pennsylvania (BB-38) in August 1941, sang “Remember Pearl Harbor,” a 1942 tribute to the service members who lost their lives during the attack, written by American big-band songwriters Sammy Kaye and Don Reid. Graduates of Ohio University will absolutely recognize that tune as the same as “Alma Mater”:

Don't get distracted by the song: Ganitch has a pretty remarkable story himself. With the Pennsylvania crew due to face off against the USS Arizona for the fleet football championship on that fateful morning, Ganitch and his shipmates were decked out in their football gear when the Pennsylvania sounded a general quarters alarm in response to the first air attack by Japan just before 8 a.m.

“Hearing the alarm, you report for your battle station immediately, in whatever you are wearing,” Ganitch, now living in Alameda, California, recounted to Saluting Military Recruits when he was honored by the San Francisco Bay Area veterans organization in June. “As my battle station was in the crow’s nest of the main mast, I reported there in my football uniform, minus cleat, and helmet. The shoulder pads made it difficult to get through the trapdoor.”

Of all the things to get frustrated over, don't flip out over Trump calling Pearl Harbor a “pretty wild scene” — based on his account of the attack, it seems like Ganitch might agree.