“For one desperate moment in time these brothers stood together in defense of their homeland and one another, leaving their fingerprint on history and those who would come after them." 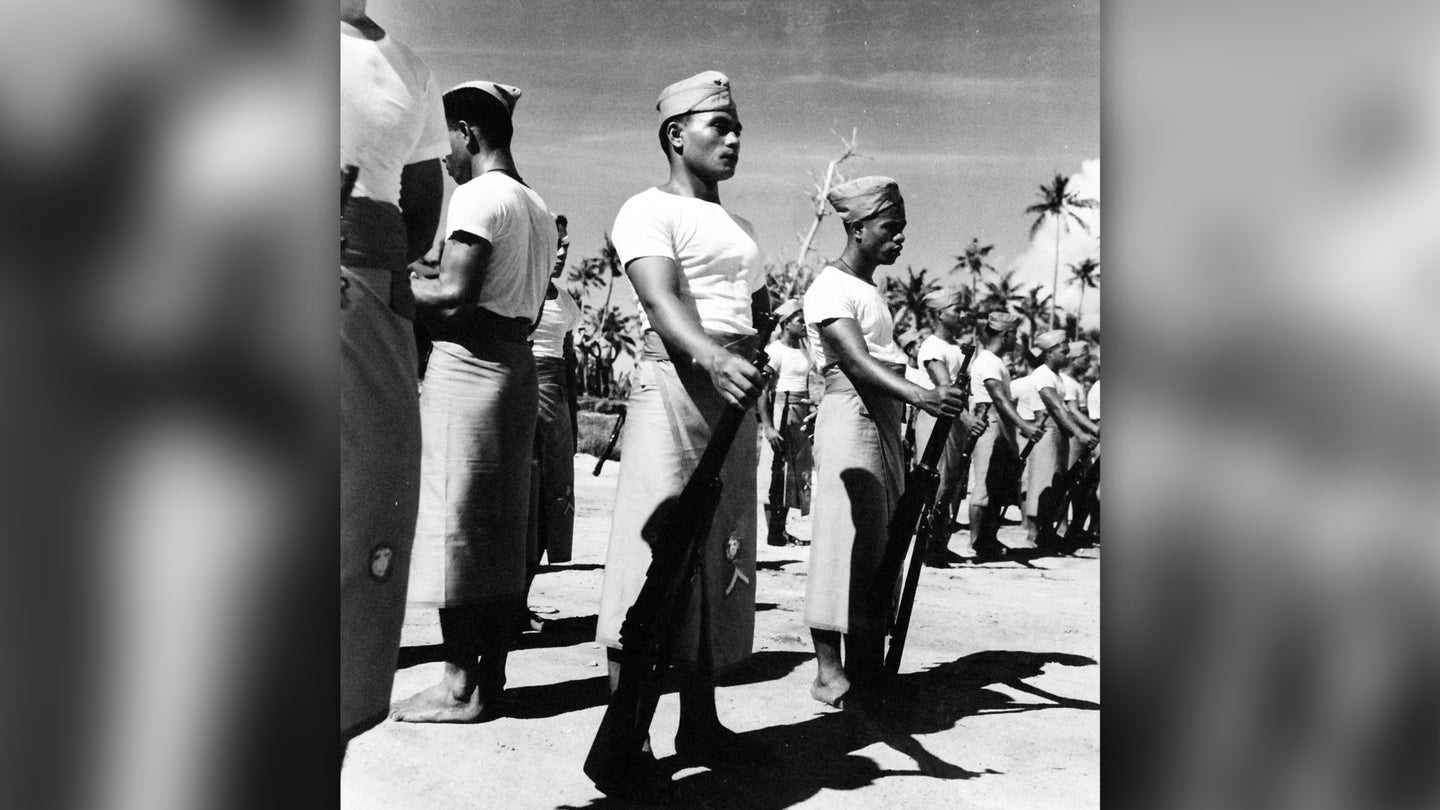 The Life of Tupelu, a native on the Samoa Islands. Shown: Private First Class of the 1st Samoan Battalion, USMC, in dress uniform. The Marine Corps Emblem and his chevron are visible at the lower edge of his “Lava Lava.” Photograph released January 1944. (U.S. Navy via National Archives).
SHARE

The Japanese surprise attack on Pearl Harbor on Dec. 7, 1941, marked the United States’ entry into World War II, but the American military had been preparing for war long beforehand.

The Marine Corps had begun forming defense battalions in late 1939, and in March 1941 the 7th Defense Battalion arrived in American Samoa, becoming the first Fleet Marine Force to operate in the South Pacific.

Facing manpower shortages and other challenges, the unit was granted the authority to form a reserve battalion of native Samoans, and on July 1, 1941, the 1st Samoan Battalion was activated.

“Known unofficially as the ‘Barefoot Marines,’ their unique dress uniform consisted of a khaki wraparound sarong-like cloth called a Lava-Lava,” according to the National Museum of the Marine Corps. “A small red felt shield patch, with an embroidered gold Marine Corps emblem was sewn to the lower end of the garment as well as the Marine’s rank chevrons. Enlisted men wore M1923 cartridge belts on their waist to pair with their M1903 Springfield rifles. A simple white undershirt and a khaki summer service garrison cap (with red piping and red patch) completed the tropical uniform. No shoes were worn.”

The lack of footwear was not unique to the new Marine battalion. Navy Cmdr. Benjamin Franklin Tilley, American Samoa’s first acting governor, established ⁠a local defense force in 1900 known as the Fita-Fita Guard. The native Samoans of Fita-Fita, who were placed under the Navy Reserve, also did not wear any shoes.

Shoes did not become a part of Samoan culture until the start of European colonization and the arrival of merchants in the 19th Century, explained Holger Droessler, an assistant history professor at Worcester Polytechnic Institute in Massachusetts.

Droessler said that another reason why Samoan warriors had not worn footwear in the past is there’s, “No need for shoes in traditional Samoan warfare,”

When war broke out, the Samoan Marines were placed on active-duty and ordered to help the 7th Defense Battalion guard Tutuila, American Samoa’s largest island, with an area of 52 square miles of mountainous and jungle terrain, Herbert I Shaw Jr., a former Marine Corps historian, wrote in the 1991 pamphlet history, “Opening Moves: Marines Gear Up for War.”

“The Marines in Samoa, thinly manning naval coast defense and antiaircraft guns at Pago Pago and patrolling Tutuila’s many isolated beaches were acutely aware that their relative weakness invited Japanese attack,” Shaw wrote. “They shared this heightened sense of danger with the Marines in the western Pacific, in China, on Luzon, and at Guam, as well as other defense battalion Marines who were gradually manning the island outposts guarding Hawaii. These few thousand men all knew that they stood a good chance of proving [once] again the time-honored Marine Corps recruiting slogan ‘First to Fight,’ if war came.”

At the time, Allied military leaders feared – incorrectly, as it turned out – that the Japanese planned to attack American Samoa to cut their supply lines to Australia, according to “Pearl Harbor to Guadalcanal: History of U. S. Marine Corps Operations in World War II, Volume I,” by Shaw, Marine Lt. Col. Frank O. Hough, and Maj. Verle E. Ludwig.

“Despite a spate of rumors and false alarms, no sign of the Japanese was evident until the night of 11 January [1942], when a submarine shelled the naval station for about seven minutes from a position 10,000-15,000 yards off the north shore where the coast defense guns could not bear,” Shaw, Hough, and Ludwig wrote. “The station suffered only light damage from the shells, some of which fell harmlessly into the bay, and two men were wounded slightly by fragments. The Marines remained on alert but received no further visits from the enemy.”

Ultimately, the Battle of Midway in June 1942 ended the Japanese military’s advance into the Pacific and the danger to American Samoa subsided, the authors wrote.

Starting in January 1944, the 1st Samoan Battalion’s companies were disbanded and the Marines were reassigned to the naval station on Tutuila. Even though they were never called upon to repel an invasion, the Samoan Marines were prepared to defend their homes and families from the Japanese Blitzkrieg in the Pacific.

“In 1941, undermanned and with little training it was recognized the unit could at best defend against a small raiding force, but would not be detoured,” according to a blog from “Together We Served,” a military heritage community website for veterans. “American nationals with no obligation to serve, every man was a volunteer. And for one desperate moment in time these brothers stood together in defense of their homeland and one another, leaving their fingerprint on history and those who would come after them.”

“By World War II, that tradition had already started, and the historic First Marine Battalion accelerated the combination of the concept of the Samoan warrior, the to’a o Samoa, with the U.S. military,” Amata told Task & Purpose. “We look back with great pride on the First Marine Battalion, including the Samoan tradition expressed in their uniforms, and they will always have a unique place in the storied history of the U.S. Marine Corps.”