The incident at Natanz was one of several fires and blasts hitting Iranian infrastructure in recent months. 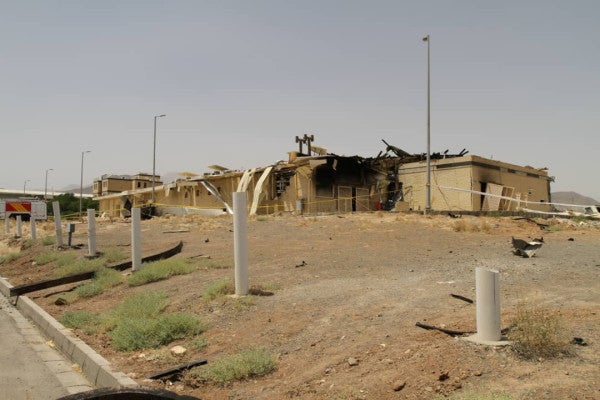 Iran's Atomic Energy Organization said an explosion at the country’s main nuclear facility in July was caused by sabotage.

“The explosion at Natanz nuclear facility was a result of sabotage operations. Security authorities will reveal in due time the reason behind the blast,” spokesman Behrouz Kamalvandi told state TV channel Al-Alam on August 23.

Iran said after the July 2 incident that the cause of the blast had been determined, but it declined to release details due to security concerns.

There has been speculation of possible sabotage as Iranian officials struggled to explain what happened and sought to downplay the extent of the damage.

Some analysts have suggested that Israel or the United States could have been behind the blast as part of a shadow war aimed at setting back Tehran's nuclear activities.

In his comments, Kamalvandi did not say whether the sabotage was internal or external.

In late July, Javad Karimi Qodusi, a member of the National Security and Foreign Policy Committee of Iran’s parliament, said the blast at the nuclear complex was caused by a “security breach.”

Some Iranian officials said it could have been a cyberattack.

The incident at Natanz was one of several fires and blasts hitting Iranian infrastructure in recent months, including a June 25 explosion at a gas-storage facility near the Parchin military base east of Tehran.

Related: Explosion at Iranian power plant on Sunday is latest in string of explosions and fires around Iran

An image released in the aftermath of the Natanz incident and satellite images released abroad showed significant damage — including ripped-out doors, scorch marks, and a collapsed roof — at a building where centrifuges were assembled.

Natanz is Iran’s main uranium-enrichment center located some 250 kilometers south of Tehran, which includes underground facilities built under some 7.6 meters of concrete to offer protection from air strikes.

Inspectors from the International Atomic Energy Agency (IAEA) have been visiting Natanz to monitor uranium-enrichment activities since Tehran and world powers signed a nuclear agreement in 2015.

Iran resumed uranium enrichment at Natanz in September 2019 in response to the United States withdrawing from the international nuclear deal that gave Iran relief from sanctions in exchange for curbs on its nuclear program.

The IAEA says Iran enriches uranium to about 4.5 percent purity, above the terms of the nuclear deal, but far below weapons-grade levels of 90 percent.