75 years ago today, the Trinity atomic bomb test ushered in the era of nuclear warfare

The 75th anniversary of Trinity is worth marking, if not celebrating, both as a scientific achievement and as a signpost of the challenge that humankind has faced ever since to manage its own capacity to self-destruct 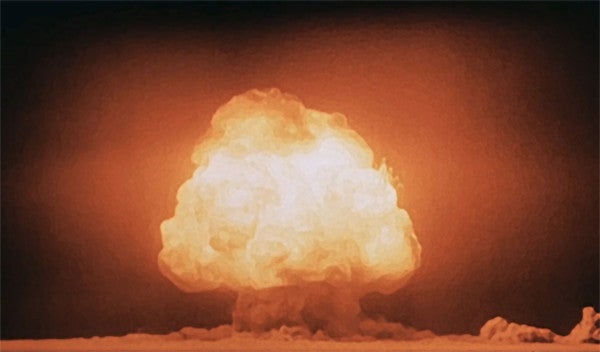 At exactly 5:29 and 45 seconds a.m. on July 16, 1945, at Alamagordo, N.M., an immense ball of fire “at first as brilliant as the sun” rose suddenly from the desert floor. Moments later came the shock wave and “a sharp loud crack” echoing off the surrounding mountains.

The small groups of scientists and military officers in the vicinity felt a sensation of awe, followed by relief, for the detonation validated the work they had been doing in secret labs across the country as part of an effort to end World War II.

The event was the Trinity test, the first explosion in history of an atomic bomb. On that day, the era of nuclear war was launched.

Just over three weeks later, that fact would become known to the world via the atomic bombing of Hiroshima on Aug. 6, followed by the Nagasaki bombing on Aug. 9.

The 75th anniversary of Trinity is worth marking, if not celebrating, on Thursday both as a scientific achievement and as a signpost of the challenge that humankind has faced ever since to manage its own capacity to self-destruct.

We are able to relive the moment thanks to the recollections of many of those assigned to the Manhattan Project who worked to bring Trinity about and who witnessed the event firsthand. Many of those oral histories have been compiled by the Bulletin of the Atomic Scientists and excerpted in a striking and thought-provoking article on its website.

As it happens, the article doesn't include the recollections of the Manhattan Project's scientific chief, Ernest Lawrence of UC Berkeley, but a copy of those came into my possession during the research for my 2015 biography of Lawrence, “Big Science.” (The quotes in the first paragraph above are from his papers.)

To start at the end and work backward, if the immediate reaction of the testing team was relief that their work had born fruit, very quickly it was followed by a grim introspection about what they had brought into being.

Kenneth T. Bainbridge, who was the immediate supervisor at the test site, rose to his feet after the blast wave had passed and congratulated J. Robert Oppenheimer, whose team of engineers and physicists at Los Alamos had designed what they called the “gadget.”

He told Oppenheimer, “Now we are all sons of bitches.”

Oppenheimer recollected that a phrase from the Sanskrit Bhagavad Gita, which he had studied as a youth, leaped into his mind: “Now I am become death, destroyer of worlds.” But he first cited the line many years later; no one on the scene heard him refer to it. (In any event, by some accounts this is a mistranslation of “Now I am become time, destroyer of worlds,” perhaps a subtler and even more sinister thought.)

Lawrence, who had been a close friend of Oppenheimer's but later would break with him bitterly, recalled that the “explosion produced a kind of solemnity in everyone's behavior immediately afterwards,…a hushed murmuring bordering on reverence.” Still, they “shared a feeling that we have this day crossed a great milestone in human progress.”

The path that led to Trinity had begun some three years earlier with the creation of the Manhattan Project as an Allied effort to produce an atomic weapon. The project's military commander, Gen. Leslie Groves, had placed Lawrence in charge of scientific development, and Lawrence had recommended his friend and Berkeley colleague Oppenheimer to run the secret lab to solve the technical problems of designing a weapon.

Designing the first bomb, which had enriched Uranium-235 as its core, was a relatively trivial challenge. The design was known as a “gun” — a subcritical plug of U-235 was fired into a hollow sub-critical U-235 cylinder. When the pieces came together, they created a supercritical mass of fissionable, explosive uranium.

The enriched uranium was produced at a plant Lawrence designed and had built at Oak Ridge, Tenn. But its output was so slow and meager that it produced only enough material for a single bomb — not even enough for a test. But the engineering of the bomb was so simple it was judged not to need testing, and the one and only uranium bomb was detonated over Hiroshima on Aug. 6, 1945.

The preferred bomb material was Plutonium-239, which had been discovered and isolated at Berkeley by Glenn Seaborg. P-239 could be produced in quantity. The problem was that it was so fissile that a gun design wouldn't work — the material would pre-detonate before the pieces came together, creating a dud.

Most of the work at Los Alamos was devoted to creating a design for a plutonium bomb. Eventually the lab settled on an implosion model. The plutonium would be formed into a hollow, subcritical sphere. To achieve detonation, an outer layer of charges shaped like pieces of watermelon rind would explode, forcing the sphere to compress into a solid, supercritical ball.

The design was so novel that no one could be certain it would work. No one was entirely sure about the energy it would produce, either — there was even some conjecture that the explosion would be so powerful it would set the atmosphere on fire, a prospect that was debunked by painstaking physics calculations.

The final step in the bomb design was for a test, code-named Trinity.

Bainbridge chose the remote site about 200 miles south of Albuquerque, and oversaw the erection of a group of crude shacks as the test headquarters a few months in advance. “Scorpions and gila monsters abounded,” recalled physicist Emilio Segrè.

The team on-site worked under conditions of extreme secrecy and punishing pressure There was nothing to do but work all day until the desert heat became unbearable, repair to their cots and resume work in the cool of the morning.

Laura Fermi, whose husband Enrico was the most accomplished physicist at Los Alamos, was shocked when he returned home after the test — “He seemed shrunken and aged, made of old parchment, so entirely dried out and browned was he by the desert sun and exhausted by the ordeal.”

The observers gathered together for the test must have been the most distinguished group of scientists ever convened for what was essentially a laboratory experiment — among them eight past and future Nobel laureates (not including Oppenheimer, widely regarded as the most brilliant physicist of his time not to win a Nobel).

At the center of the site was a 100-foot steel tower from which the “gadget” would be suspended. The core arrived from Los Alamos via guarded caravan on July 13 and was hoisted to the tower the next day.

Base Camp, about 10 miles from the tower, was teeming with scientists and luminaries. Most were dispatched to a watching post at Compania Hill, a bumpy 10-mile, three-hour drive. There Lawrence found a clutch of colleagues including a young Caltech physicist named Richard Feynman, who was fiddling with the post's radio.

Thunderstorms passed over the site. That evening, Segrè recalled, “my attention was attracted by an unbelievable noise whose nature escaped me completely. As the noise persisted… I went out with a flashlight and found hundreds of frogs in the act of making love in a big hole that had filled with water.”

The storms forced the test shot to be postponed from 4 to 5:30 a.m., and the observers passed the time placing bets on its yield, slathering their faces with suntan lotion and fiddling with their protective goggles. At base camp the observers were instructed to lay prone in ditches excavated to protect them from the blast, with their feet pointed toward the tower, covering their eyes with their hands.

“We were dealing with unknowns outside the realm of man's experience,” recalled Groves, “and we simply had to try to imagine everything that might happen.”

“Then came the last minute countdown,” recalled physicist Boyce McDaniel. “Finally, the brilliant flash of an ever-growing sphere was followed by the billowing flame of an orange ball rising above the plain.”

At the moment of detonation, Bainbridge “felt the heat on the back of my neck, disturbingly warm. Finally I could remove the goggles and watch the ball of fire rise rapidly. It was surrounded by a huge cloud of transparent purplish air produced in part by the radiations from the bomb and its fission products. No one who saw it could forget it, a foul and awesome display.”

Recalled Val Fitch, a future Nobel laureate assigned to Trinity as a military technician, “Apparently no one had told the military policeman, stationed at the door of the bunker to control access, what to expect. He was absolutely pale and a look of incredible alarm was on his face as he came away from the bunker door to stand beside me and view the sight. I simply said what was on my mind, 'The war will soon be over.'”

That was true, but the battle over nuclear weapons was not. President Truman received word of the successful test while meeting with Winston Churchill and Josef Stalin in Potsdam, outside Berlin. He mentioned to Stalin that “we had a new weapon of unusual destructive force,” Truman recalled. “All he said was that he was glad to hear it and hoped we would make 'good use of it against the Japanese.'”

After the war, Oppenheimer led a campaign to place nuclear technology under international control. It was an idea destined to fail amid the postwar conflict between the West and the Soviets.

After Hiroshima and Nagasaki, American physicists were hailed as heroes. Over time, however, the gravity of their achievement began to sink in. That was especially true after Truman agreed to launch a project to develop the hydrogen bomb, a weapon of truly unimaginable power.

The project split the physics fraternity. Working on the Manhattan Project could be justified as part of the effort to defeat Hitler, and especially to keep an atomic bomb out of his hands by beating him to it. (In reality, as the Allies discovered after the war, the much-feared Nazi nuclear weapons program never got off the ground.)

The H-bomb was a different story. Promoted by Lawrence and Edward Teller, it was seen by many of their erstwhile colleagues as fundamentally immoral. Too powerful to be deployed as a practical weapon in warfare even according to Pentagon reasoning, “it becomes a weapon which in practical effect is almost one of genocide,” Fermi wrote in a public statement.

Oppenheimer's staunch opposition to the project led to his bitter breach with Lawrence, and even more dismally to the government campaign to revoke his security clearance amid hints, all fabricated, that he was disloyal to the U.S. The attack on Oppenheimer darkened his final years, an undeserved ending to a career that helped save civilization.

As Oppenheimer foresaw, the unrestrained development of staggeringly powerful weapons would poison international relations and oppress human destiny into the limitless future. The path to Trinity has been well examined. The path from Trinity is still being mapped. The 75 years we have traveled since then are only a beginning.