The 21-year-old Heard was just old enough to purchase a gun for the underage Torres, prosecutors say. 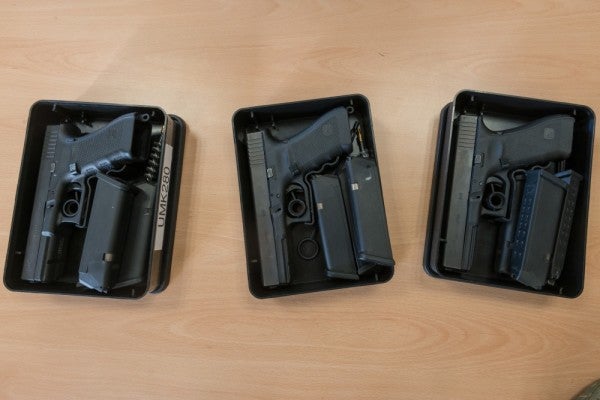 An airman was charged with unlawfully purchasing and transferring a firearm that was later used in a deadly shooting last month at a dormitory on Grand Forks Air Force Base that took the lives of two other young airmen: Airman 1st Class Natasha Aposhian, 21, and Airman 1st Class Julian Carlos Torres, 20, both of the 319th Reconnaissance Wing.

Airman 1st Class Daesha Renae Heard, 21, allegedly bought a .40 caliber Glock model 22C pistol for Torres on May 5, 2020, less than a month before Torres allegedly shot and killed Aposhian and then himself, according to documents from the U.S. District Court for the Eastern District of North Dakota. Heard, who was charged on July 20, was also charged with one count of making false statements during the purchase.

At 20 years old, Torres was not allowed to buy a handgun from a federally-licensed gun dealer; the minimum age requirement is 21.

“Heard said that on May 5, 2020, Torres called her and again asked her to help him purchase a firearm,” wrote Nicholas Bradt, Special Agent with the Bureau of Alcohol, Tobacco, Firearms and Explosives, in the July 20 criminal complaint.

“Torres told Heard that she could ‘gift’ him the firearm and that all they needed to do was create a document with the firearm’s make, model and serial number to transfer the firearm to Torres,” Bradt said.

According to the complaint, Torres and Heard drove to a local gun store on May 5, where Torres picked out the Glock “because he liked the way it looked and liked the fact that it had extended magazine options,” Bradt said.

Heard could not buy the pistol at first because she did not have her military orders, which are required for a non-resident to buy a gun in North Dakota, according to the complaint.

Heard and Torres went back to Grand Forks Air Force Base to get the orders, then returned to the gun store in separate cars. Heard walked in and bought the gun and a box of 30 to 50 rounds of ammunition for $474, the complaint said.

Heard answered affirmatively on a form asking whether she was the actual buyer, according to the complaint, and then allegedly exchanged the gun with Torres for $500 in the gun store parking lot.

“Heard told Torres to take the firearm to the Grand Forks Air Force Base Armory,” the complaint said, “but Torres told her that he had an unspecified friend he was going to keep the firearm with. Heard said she did not believe Torres had any real ill intentions in regards to the firearm.”

Torres got into “a verbal altercation” with Aposhian shortly before the shooting, according to the criminal complaint. After the shooting, investigators used the Glock's serial number to trace the weapon back to Heard.

The office of the Federal Public Defender for the District of North Dakota, which is representing Heard, declined to comment for this article. Heard was arrested on July 20 and released on July 21. The preliminary hearing for the case is set for August 10.

In June, Aposhian’s parents described their daughter as a victim of domestic violence.

“That should be the safest place to be on a U.S. base,” her father Murray told Valley News Live in July. “And the fact that something like this happened is unforgivable and should never happen.”

An Arizona native, the 21-year-old Aposhian left college to pursue a career in the Air Force, Murray said. She graduated with honors from basic training, graduated second in her class at tech school, and planned to serve 20 years in the branch, he said.

Aposhian arrived at Grand Forks in April, where she worked as an aircraft parts store apprentice, according to the Air Force.

According to Murray, Aposhian had a brief relationship with Torres, of the 319th Security Forces Squadron. The relationship lasted no more than a few dates, Murray said.

“She did relay to her mother and her best friend that she was afraid of this guy. That there were instances of him being volatile and aggressive and controlling,” Murray said.

“She said, ‘I’m afraid he’s going to kill me, Mom. I feel like I need to get an order of protection,’” Megan Aposhian, the airman's mother, told Stars & Stripes. “She did express that she was afraid of him and thought he was going to shoot her. I don’t know why.”

The interviews with Aposhian's parents came amid a military-wide reckoning over the treatment of women in the ranks spurred by the disappearance and death of Spc. Vanessa Guillen, who allegedly experienced sexual harassment at Fort Hood before she went missing in April.

Guillen’s case led to a surge of female service members sharing their stories of sexual harassment and assault under the hashtag #IAmVanessaGuillen.

Megan Aposhian told Stars & Stripes that after experiencing her daughter's death and reading about Spc. Guillen, she feels naïve that she was unaware of the domestic and sexual violence issues in the military.

“We want the same reforms that Vanesa Guillen’s family is asking for. The military has a major issue with domestic violence and sexual violence,” Murray told Stars & Stripes.