China has doubled its nuclear stockpile in the last 2 years, DoD report finds 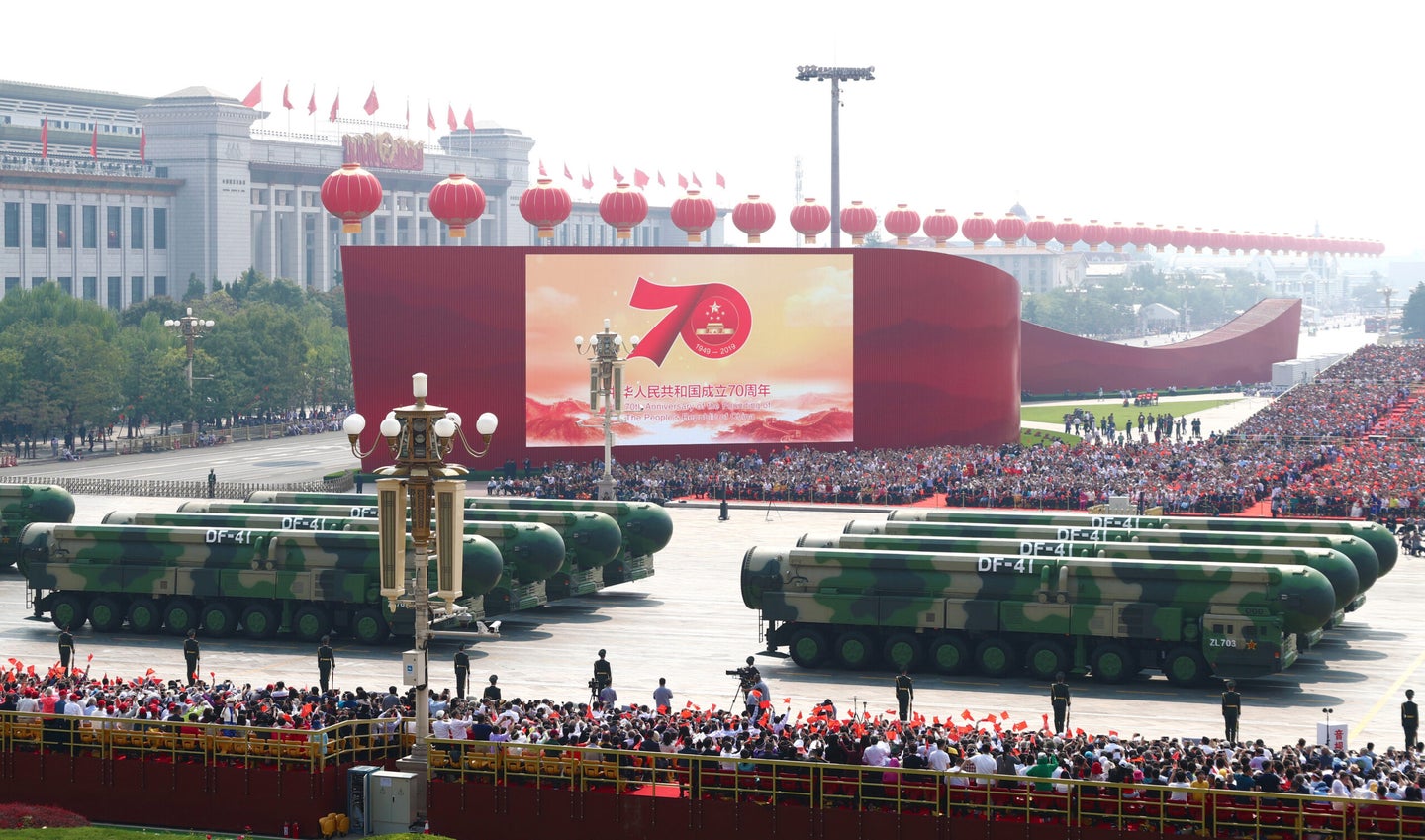 A formation of Dongfeng-41 intercontinental strategic nuclear missiles takes part in a military parade celebrating the 70th anniversary of the founding of the People's Republic of China in Beijing, capital of China, Oct. 1, 2019. (Lan Hongguang/Xinhua via Getty Images).
SHARE

China’s arsenal of nuclear weapons has roughly doubled to more than 400 warheads since 2020, according to the Defense Department’s most recent report on Chinese military power.

The pace at which China is expanding its nuclear stockpile is much faster than the Defense Department predicted at the start of this decade.

“Last year, DoD estimated that the PRC had a nuclear warhead stockpile in the low-200s and projected it to at least double over the next decade,” the Pentagon’s 2021 report on China says.

But in 2021, “Beijing probably accelerated its nuclear expansion,” and now China has more than 400 nuclear warheads, according to the Defense Department’s 2022 report on Chinese military power, which was released on Tuesday.

While China has been building nuclear weapons at a “dramatically accelerated pace” for the past couple of years, “We’re not reporting on a major change between last year and this year,” a senior defense official told reporters on Monday.

“We’re not trying to say that it’s accelerating this year compared to last year,” said the senior defense official on condition of anonymity under rules established by the Pentagon. “I think we’re saying that there’s an accelerating trend for them to go beyond the relatively smaller force that they had historically.”

From the mid-2000s until just a couple of years ago, China was gradually increasing the size of its nuclear stockpile, the senior defense official said. Now China is on track to have 1,500 nuclear warheads by 2035.

“They’re going from what was often characterized as sort of a minimum set of deterrence capabilities to one that’s much more sophisticated in scope and also larger in size,” the senior defense official said. “They’re now kind of getting into the range of the middle nuclear powers here, and they are continuing to expand the force such that if you look at what they’ve done over the past couple of years, where we think they’re going with the buildout of the silo fields and their other capabilities, that it would get them — as we get up towards the end of this decade — closer to 1,000 nuclear weapons, as we said last year. And then if you project out further to 2035, that’s how we get up to 1,500.”

China’s relationship with the United States and other nuclear powers, such as India, as well as Chinese concerns about threats to its own nuclear deterrence, have been driving factors behind Chinese leaders’ decisions to vastly increase the size of their country’s nuclear stockpile, the senior defense official said. Compared to China’s growing stockpile of nuclear weapons, the U.S. has approximately 5,400 warheads, according to the Federation of American Scientists, a global policy think tank.

“Of the approximately 1,744 warheads that are deployed, 400 are on land-based intercontinental ballistic missiles, roughly 944 are on submarine-launched ballistic missiles, 300 are at bomber bases in the United States, and 100 tactical bombs are at European bases,” according to the latest Nuclear Notebook column published in the Bulletin of the Atomic Scientists.

In particular, China has been concerned with how other countries are making advances in intelligence, surveillance, and reconnaissance technology, missile defense capabilities, and conventional along with nuclear strike capabilities, the senior defense official said.

“They have not formally changed their policy or their strategy, but they have got a program underway that is going to give them a set of capabilities that would potentially enable them to consider different policy or strategy choices beyond the ones that have been open to them in the past,” the senior defense official said.

China has not changed its “no first use” doctrine when it comes to nuclear weapons, said Timothy Heath, a defense expert at the RAND Corporation, who spoke to Task & Purpose before the Defense Department’s latest report on Chinese military power was released.

One possible reason why China has decided to increase its nuclear stockpile is that Chinese military leaders fear the U.S. military could use long-range strike weapons, such as hypersonic missiles, to “preemptively decapitate China’s nuclear deterrent capability in the event of a conflict,” Heath said.

That is why China has built permanent missile silos and temporary missile launchers and submarines capable of launching nuclear missiles, he said.

The expansion of China’s nuclear forces is also part of a broader modernization of the People’s Liberation Army, which has included making the Rocket Force an independent military branch, Heath said.

“It’s not hard to imagine that once they became an independent force, their leaders demanded that they get a bigger share of resources to carry out modernization, which they seem to have received,” Heath said.

Heath also said it is unlikely that China is planning to match the size of the U.S. military’s nuclear stockpile.

“They don’t need as many warheads as us because they have no allies,” Heath said. “They have no reason to have nukes available to protect partners and allies around the world, like we do. They only need nukes to deter countries from either attacking China or intervening in the event of a Chinese attack on Taiwan.”