“When I joined the Air Force, I didn’t know any fighter pilot moms.” 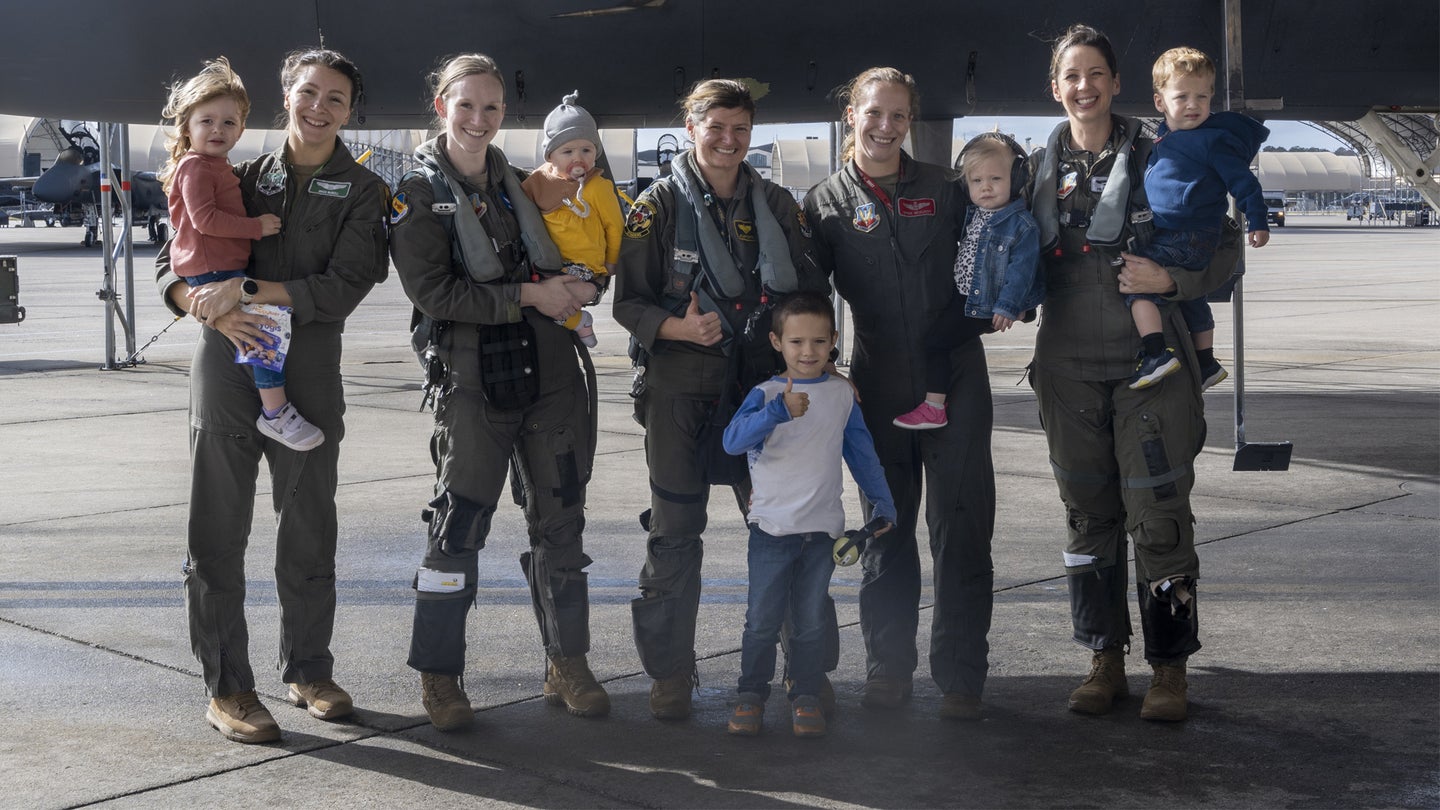 The special flight was in honor of Maj. Tiffany McElroy, an instructor weapons systems officer with the 333rd Fighter Squadron who has a 16-month-old daughter and is taking a break from F-15E flying to teach undergraduate combat systems officers.

It was not clear which of the other moms were front-seat pilots or back-seat ‘wizzos’ like McElroy, but either way, having so many fighter jet aviators who are also moms in the air at once is a major accomplishment.

“When I joined the Air Force, I didn’t know any fighter pilot moms,” said McElroy in a press release about the flight.  “After going through almost three years of training to become qualified in the jet, I understand why. You put your entire heart into the upgrades, and you work 12 hours a day, easily. Once you are qualified, you look forward to the trips and combat missions, and most of us spend more time at a hotel than in our own beds, which makes having a family more difficult.”

Indeed, military service in general and aviation, in particular, are often seen as incompatible with motherhood. Though the high demands of military life strain both mothers and fathers, a 2017 government study found that far more women separated from the military because of parenthood-related reasons than men.

“Gaps in child care could disproportionately affect military mothers, who are less likely to have a stay-at-home spouse and more likely to feel the strain of balancing family and military responsibilities,” the Defense Advisory Committee on Women in the Services wrote in 2019.

Often, the challenge comes down to child care systems that are unsuited for modern military life, particularly when parents have to fly at night and need child care outside of typical hours, or when parents are charged by the minute for additional care if they are running a few minutes late after work.

“We’ve created antiquated systems that are built off a model where the male was the military member and the woman stayed home with the kids,” Kyleanne Hunter, a former Marine Corps Super Cobra helicopter pilot, told Task & Purpose in 2020. “You don’t have that choice anymore.”

“At first I was so excited, but my excitement turned into pure terror,” she recalled about first becoming pregnant. “I immediately started to think how this would affect the flying schedule, and how I just became the squadron’s worst asset, that I wouldn’t be able to fly or do the mission, and all my training just went down the toilet.”

McElroy is not the only woman in the armed forces to have those fears. In a military that is nearly always stretched to the limit, any loss of manpower can be a big blow to a unit. Many pregnant servicewomen say that the stigma directed at them stems from taking time off or taking lighter duty, which increases the workload for their comrades.

Pregnant service members “are viewed as dead weight,” one enlisted man told researchers in 2019. “It can be an issue because they try to make them feel [bad] for being pregnant or unable to do certain things. That’s been my experience.”

“I guess it can be perceived by the unit … [that] the female has chosen to be pregnant instead of working,” said a male officer.

Fortunately, McElroy said her squadron leadership was “nothing but happy for her,” the press release said. Even better, her fellow airmen showed up with meals for her when she delivered. But more challenges followed after giving birth.

“I had to request longer and more breaks to breastfeed between classes, briefs, flying, and debriefs,” she said. “At first, I was nervous to ask; but then realized it’s all a normal part of raising a human, and when I came to terms with that, not only was I comfortable with it, but also felt like an advocate for future moms-to-be.”

It also helped that McElroy found a network of other fighter pilot moms to lean on for advice. Even the effect of G-forces is different after childbirth, the press release said, so the other pilots’ advice was a “life saver,” said McElroy.

In the midst of a pilot shortage and a recruiting crisis, the Air Force and the military writ large cannot afford to lose highly-trained aviators like McElroy. To try to keep them flying, the services are working to make life easier for pilot moms. Recent changes include reducing restrictions on pregnant women so they can keep flying without a medical waiver; issuing free maternity uniforms; and adding new incentives to bring in more childcare workers.

Hopefully, that means more pilots and wizzos like McElroy will not have to choose between having a family and the job of their dreams.

“There is never a perfect time to become a mom, so embrace your journey and know that you have a support community out there,” she said. “Just because you’re a mom doesn’t mean you can’t fly.”