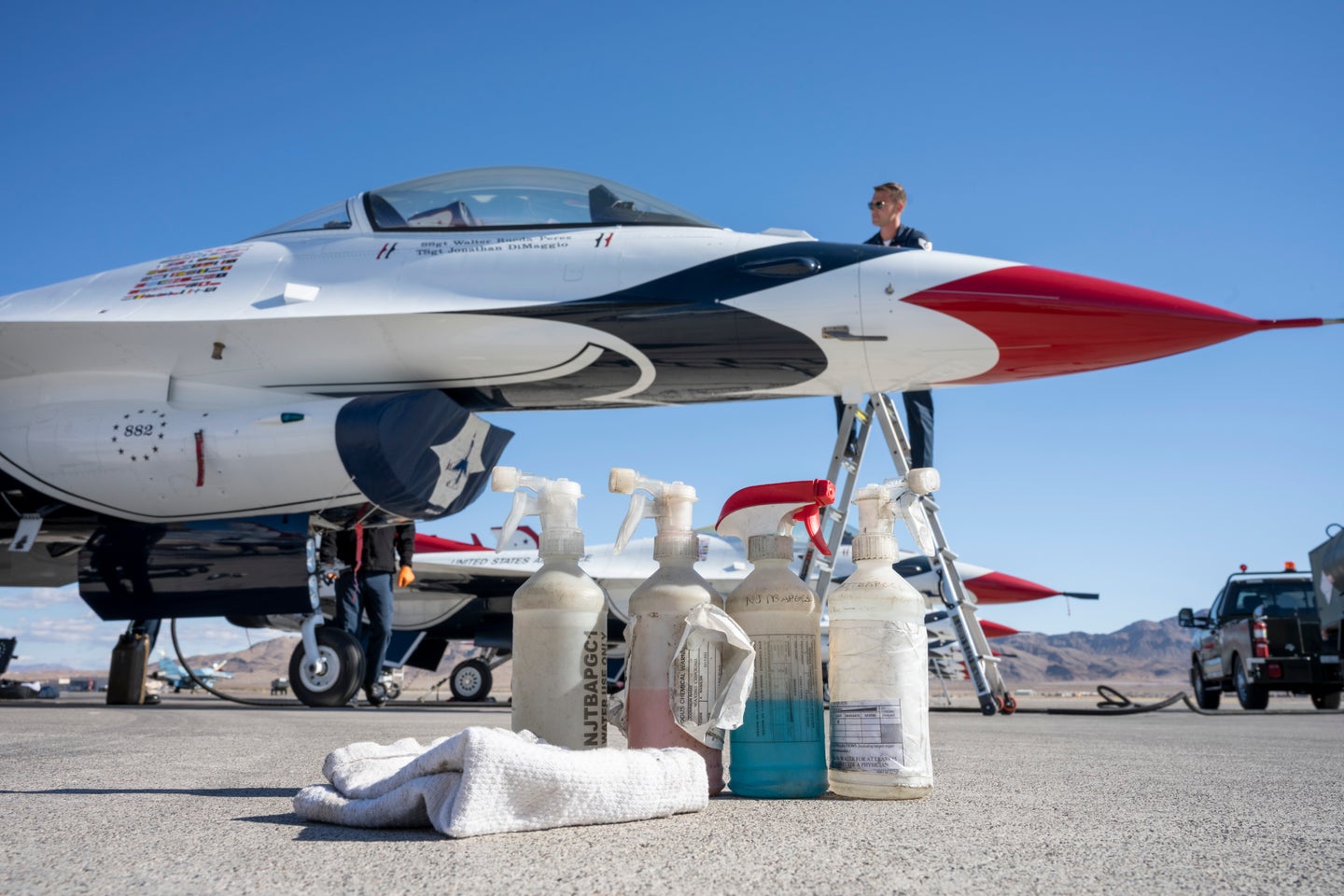 Ever look at a picture of the Air Force Thunderbirds and think ‘gee, how do they keep those jets so shiny?’ Well, the answer is a lot of elbow grease, and even more Windex.

In fact, the Thunderbirds run through about 24 oz. of Windex (two bottles) per jet after every flight. With 52 sorties a week during a normal show season, that adds up to a lot of Windex. The Air Force doesn’t officially endorse Windex of course, but it does endorse the professionalism of its airmen.

“In a lot of places without a big military presence, we may be the only opportunity that the public gets to interface with their United States Air Force,” said Capt. Mike Bell, maintenance officer for the Thunderbirds. As such, he leads 94 enlisted airmen who keep the Thunderbirds’ F-16s running smooth and looking sharp.

“Our job is to represent all Air Force mechanics, and we view that as a large responsibility,” Bell told Task & Purpose. “Cleaning the aircraft is one way we can make an impression of the skill and aptitude of the mechanics who maintain them.”

Pilots may fly the jets, but maintainers work on them long before the pilots arrive to the hangar and long after they leave.

“We let the pilots fly the aircraft for an hour and a half and then we take care of them the other 23 hours or so to make sure they’re ready to fly the next day,” Bell joked. “Maintainers are ferociously dedicated to their aircraft in a way that’s kind of tough to put into words.”

How often are the jets cleaned?

Maintainers clean the Thunderbirds aircraft twice a day. The first cleaning takes about 15 to 20 minutes when the crew first shows up to the hangar in the morning. This is a light cleaning, mostly to get the morning dew and humidity off the wings and landing gear doors. The post-flight cleaning takes a little longer, when crews spend 30 to 45 minutes wiping off all the crud the aircraft ran into mid-air.

While two wipes a day sounds like a lot, it’s actually the same as any other squadron in the Air Force, Bell said. The Thunderbird maintainers have to be a little extra careful because of a coat of white gloss paint that makes their F-16s easier to see during a demonstration. The combat fleets use a medium grey color to provide optical camouflage, Bell explained.

“It shows the stains super well,” he said, about the white gloss. “That’s why we put such an emphasis on wiping the aircraft.”

What are the nastiest things to clean off the aircraft?

So let’s get down to brass tacks here: what kinds of gunk do the maintainers have to clean off the jets? Bugs. Lots of bugs.

“We’re in Florida this week so there’s a ton of bugs,” Staff Sgt. Kristyne Pierson, one of the assistant dedicated crew chiefs for the Thunderbirds, said in late October. “We wipe every single bug from the rudder to the gear to make sure the paint job’s looking good.”

Usually, the F-16s run into the most bugs during take-off and landing, Pierson said. The Thunderbirds perform all over the country and around the world, but areas like Florida, which have lots of trees and low elevation, tend to be more buggy than others. In fact, that’s one of the advantages of being based in the high desert surrounding Nellis Air Force Base, Nevada.

“Really that’s the only good part about the summer” at Nellis, Pierson said. “No bugs.”

But bugs are not the only kind of icky splotchy that wind up on the jets. Maintainers also deal with hydraulic fluid, smoke oil, landing gear lube and engine exhaust, all of which can leave nasty streaks on the paint if left for too long. Smoke oil, in particular, is a pain to scrub off, Pierson said.

“It has the consistency of cooking oil and you have to wipe it with multiple rags,” she said. “It leaves a rainbow film so you have to go over it a couple of times to get it off.”

Smoke oil is what allows Thunderbird pilots to trail pretty white smoke from their engines when they are flying an airshow. When jets trail each other mid-flight, smoke oil from the lead jet can rub off onto the follower. The engines also generate exhaust, which, when mixed with the atmosphere, can turn into black streaks on the side of the jets, Pierson said.

You’d think scrubbing all that off every day would become a nuisance, but it’s really not much of a hassle, Bell and Pierson said.

Is it a pain in the butt to have to clean the jets so often?

As many slobs like myself know all too well, the more you clean something, the easier it is to clean. That’s the same reason why cleaning the Thunderbird jets goes by easily: none of the bug streaks and exhaust marks are left to set into the paint.

“Because we wipe them so often it makes them easier to clean,” Pierson said.

Another principle also helps: many hands make light work. When the jets taxi back into the hangar after a flight, the crews immediately get to work wiping it down. Everyone knows their job, Pierson said, so it’s a lot like watching a NASCAR pit crew in action.

The step-by-step process of cleaning a jet varies depending on the crew, but it generally starts with cleaning the aircraft skin from nose to tail, Bell said. Then they clean the jet’s canopy, the three landing gear, assemblies and doors, then the tire rims, and finally the missile rails.

Besides Windex, the maintainers also fill up a water buffalo, put in some Dawn and give the jets a good scrub. They also wax the jet, armor the tires and clean the rims. Jets with an older coat of paint on them take a bit of extra time and “a bit more elbow grease,” Pierson said.

Why do you all look so ripped?

It’s not just the aircraft that look good, but also the airmen themselves. If you watch footage of a Thunderbirds airshow, you’ll see most of the maintainers look quite buff. They also wear tight shirts, crisp haircuts, and cool shades to accentuate that buffness. Here again, the personal grooming and fitness standards are the same as the rest of the Air Force, Bell said. But there is a cultural emphasis within the Thunderbirds to knock those standards out of the park.

“We’re proud to wear the patch,” Pierson said. “We were handpicked to perform these duties, and with that pride, we want to showcase ourselves. We’re proud of the way the uniform fits, proud of everybody we’re there to represent, so that’s part of why we keep our sharp haircuts, work out and eat healthy.”