“Even a small change in aircrew dexterity can affect how the plane flies or type of mission they can accomplish.” 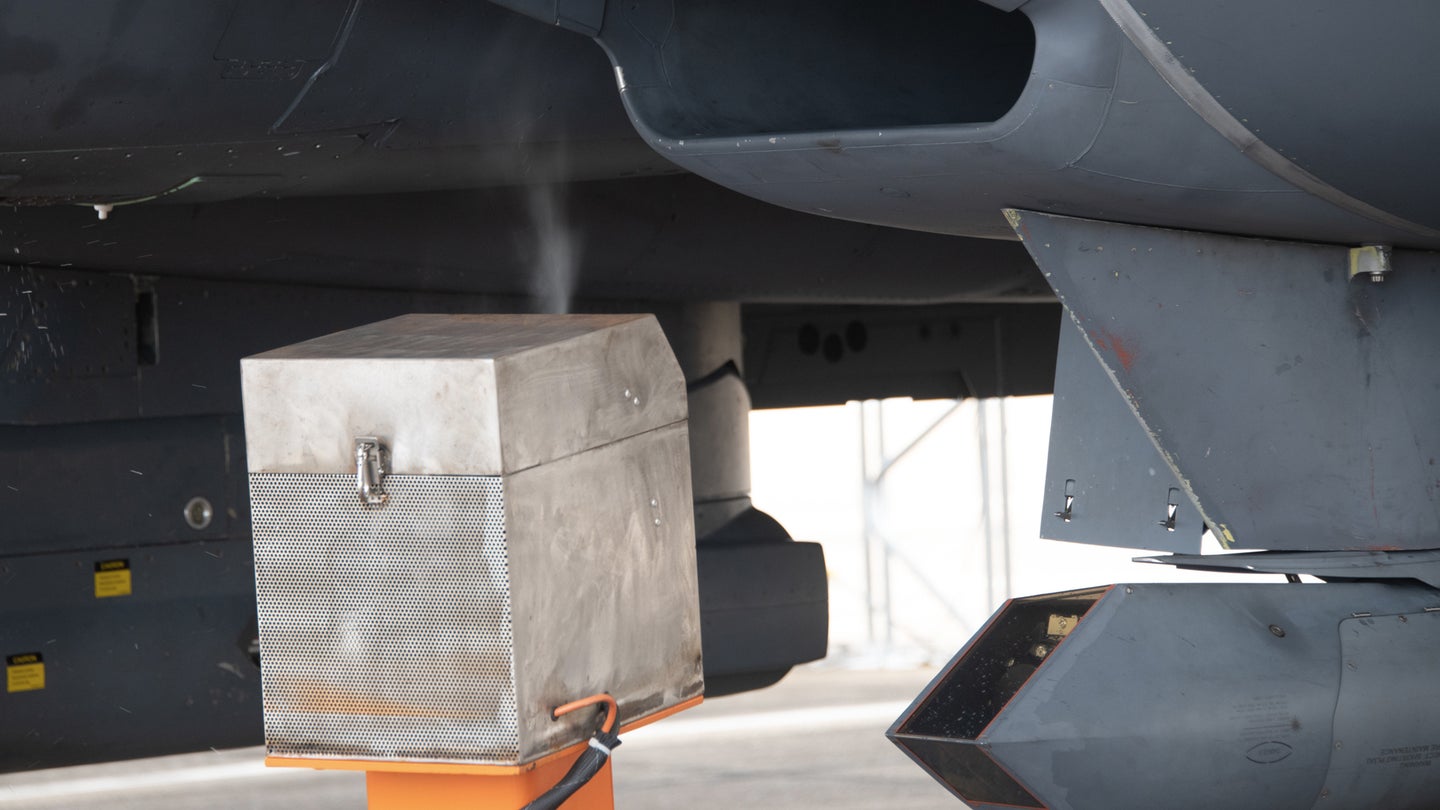 Analysts from the Air Force Research Laboratory's 711th Human Performance Wing use the orange spray carts displayed to insert oil of wintergreen into the idling F-15E Strike Eagle prior to taxi at Eglin Air Force Base, Fla., Aug. 16, 2022. This test is part of a larger Department of Defense effort to evaluate cockpit environmental conditions after a chemical weapon attack (Ilka Cole/U.S. Air Force).
SHARE

As seen in movies and TV shows like Jarhead and Generation Kill, wearing a gas mask and suit for surviving chemical, biological, radiological and nuclear (CBRN) attacks is a clunky and uncomfortable experience. That also rings true for aircrew, whose job of making minute adjustments to flight control sticks and instruments while piloting expensive aircraft becomes much more difficult while wearing a clumsy protective suit.

With that in mind, the Air Force wants to make it easier for pilots and other aircrew to hop in their aircraft, crank up the environmental control system and purge the contaminants out so that the aircrew can take off the protective gear and work the sensitive instruments with the delicacy that they are accustomed to.

“Even a small change in aircrew dexterity can affect how the plane flies or type of mission they can accomplish, so if we can minimize the time frame a member has to wear their protective gear it will improve operational tactics, techniques, and procedures,” said 1st Lt. Andrew DeNicola, a test engineer with the 28th Test and Evaluation Squadron in a recent Air Force press release.

One former Air Force pilot very much agreed with that argument.

Aldridge said the current gear Is cumbersome and hot, and the heat and humidity from the pilot’s breath “quickly fogs up the lens, and the reduced field of view makes it virtually impossible to use in a dog fight.

“Yes, it’s probably better than no protection, but a revamp is long overdue,” he added, “Glad to see the Air Force taking steps in that direction.”

DeNicola and his colleagues at the 28th TES and the 711th Human Performance Wing spent three days at Eglin Air Force Base, Florida last month conducting experiments on the F-15E Strike Eagle, the two-seat strike fighter jet that the Air Force designed to plow into contested enemy airspace, drop a lot of bombs and fight its way back out. The experiments were meant to determine how long it takes a chemical contaminant like tear gas to be purged from the aircraft, and to find possible new ways to get those chemicals out as soon as possible.

How do you go about doing that? The analysts sprayed liquid methyl salicylate, also known as oil of wintergreen (a common ingredient in mint candies), into the idling F-15E prior to taxi. Engine heat then vaporized the liquid, the press release explained, which allowed the chemical vapor to flow into the cockpit and expose the aircrew.

Though they vary between aircraft, environmental control systems generally control the air conditioning, cabin pressure, heating and other systems that make the aircraft livable for aircrew. With some aircraft, the environmental control system does not really kick in until it’s airborne, but once it does, it can purge out any contaminants that the aircraft picked up on the ground, at which point aircrew can take off the respirators and other bulky gear that makes flying difficult, the press release explained.

The Florida team set out to determine how long it takes to complete that purge, which in turn helps inform aircrew when they can slip into something a little more comfortable, or at least slip out of something less restrictive.

“The data helps us understand what goes on inside the aircraft when operating after a chemical weapon attack and flying in a contaminated environment,” said William Greer, a senior CBRN analyst with 711th Human Performance Wing. “What we learn ultimately helps inform aircraft design teams on opportunities to enhance aircraft environments and, along with better aircrew equipment, enable aircrew to execute their missions more effectively in a chemical threat environment.”

The F-15E is not the first aircraft the Air Force has tried this experiment on. Back in 2020, analysts at Little Rock Air Force Base, Arkansas tried the same test on a C-130J transport plane. The last time a test like this was completed was in the 1970s and 1980s with equipment that would now be considered obsolete, the Air Force noted in a press release at the time. The data gathered from these experiments could help the military better understand how chemicals behave in a flying aircraft and hopefully design better, less clunky protective equipment.

“We hope that this test will give aircrews more flexibility with how they operate in an austere environment and allow them to fly more missions over time,” Greer said in 2020. “A few years down the road, we think that the results here will lead to the Air Force deploying new types of protective gear that would be more functional and allow the operator to maintain their competitive edge.”

The vapor test is one of several recent efforts by the Air Force to make CBRN protective gear easier to work in for aircrew. Over the past two years, the Air Force had tested out a new suit for such threats that is designed to be more comfortable and mobile than the old 66/P system. Called the Uniform Integrated Protective Ensemble, the new system consists of layered clothing such as gloves, respirator and undergarments, a 2021 press release explained. UIPE’s two-piece undergarment is designed to be lighter, more mobile, more breathable and less hot than the previous system.

“Moving to an under layer allows air crews to use an outer layer they’re more familiar with, like their flight suits,” 1st Lt. Hunter Mangueira, systems engineer for the Air Force CBRN Defense Systems Branch, said in the press release. “We’re trying to make CBRN flight equipment similar to the flight crews regular mission set equipment, removing the learning curve and any hindrance when they conduct their missions.”

The easier the better, because videos of pilots donning older systems make the process look lengthy, tedious and not at all comfortable. And it’s not just the aircrew who have to deal with it. The crew chiefs and various flight line airmen who keep the aircraft running have to wear protective gear too, and they don’t enjoy the environmental control systems that purge contaminants out of a cockpit.

Working in those conditions is a challenge the military did not focus on as strongly during the decades of the Global War on Terror, but now it might be back in vogue.

“The nation’s recent public health challenges in addressing the 2019 coronavirus pandemic (COVID-19) have caused questions as to whether the U.S. military is sufficiently prepared for an adversary that might be emboldened to use biological weapons against U.S. national security interests,” said Al Mauroni, director of the U.S. Air Force Center for Strategic Deterrence Studies, in an essay for Military Review, the Army’s professional journal, earlier this year.

Mauroni pointed out that unclassified assessments from the military and State Department indicate America’s current chief rivals, China and Russia, could have a biological weapons capability, as could North Korea and Iran. However, it could be difficult to predict what those threats may look like in the future as technology evolves.

“The lack of any actual use of biological weapons against the United States has perhaps diminished the concern that potential weaknesses exist,” he wrote. “In the event of a future conflict with great powers, there is the chance that biological warfare could emerge as a significant threat, perhaps in a form unrecognized from Cold War experiences.”

With that kind of uncertainty, experiments like the vapor purge may prove useful. Hopefully, we’ll never have to find out.

UPDATE: 9/8/2022; This article has been updated with comments from former Air Force pilot Trevor Aldridge on how difficult current Air Force PPE is to wear while flying a fighter jet.