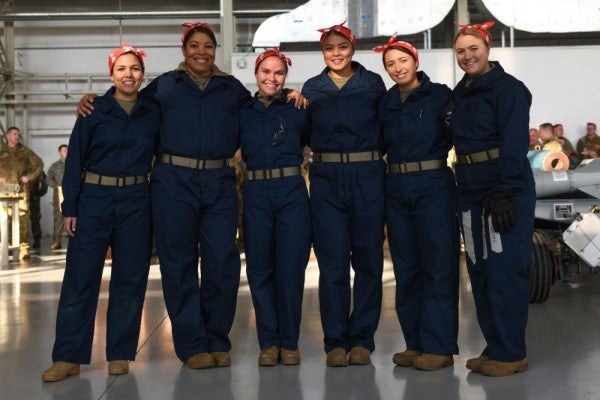 An all-women team of airmen crushed an aircraft ground crew contest at Aviano Air Base on Tuesday, and they did it in Greatest Generation style.

The “Bouncing Bettys,” the first all-female team to compete in Aviano's Rapid Aircraft Generation and Employment (RAGE) competition, rocked navy blue coveralls and red polka dot bandanas in an ode to the legendary Rosie the Riveter.

“The team members wanted to represent the women that paved the way and were here before them during World War I and II, The Woman Ordnance workers,” wrote Airman 1st Class Ericka Woolever, a photographer with the 31st Fighter Wing who documented the competition.

While the World War II propaganda icon Rosie the Riveter was ostensibly a factory worker, her motto “We Can Do It!” applies to all job descriptions and has inspired many young women past and present to serve their country.

The motto still holds true today, as the six “Bouncing Bettys” surged through the RAGE to win gold.

RAGE itself is a recent invention, first held at Aviano in October, 2019 to test ground crews' ability to ready aircraft munitions in preparation for a sortie. Each team of five or six airmen is evaluated based on six different events: a written test, stockpile practices (computer based), trailer configuration, trailer re-configuration, 463L palletization and, finally, the munitions build.

To add pressure, the teams must complete all the tasks “in front of a large crown of rowdy Maintainers!” as Woolever quoted one airman as saying of the first RAGE.

The idea for an all-women team started with Staff. Sgt. Ana Merkel, a munitions inspector from the 31st Munition Squadron. According to Woolever, Merkel “developed the idea of the team because she wanted to highlight the impact females have on Sortie generations.”

Like the German land mine of their namesake, the “Bouncing Bettys” packed a punch, demonstrating “preparation and communication which they felt were bedrocks for success in any military conflict,” wrote Woolever.

If the Facebook page Air Force amn/nco/snco is any measure, the victorious Bettys are getting a hero's due.

“My Grammy was a riveter during the war and this makes my heart so happy!” wrote one commenter in response to the news.