It would mark the first time in nearly seven decades that U.S. military personnel have had legal recourse to seek payment from the military in cases of medical malpractice. 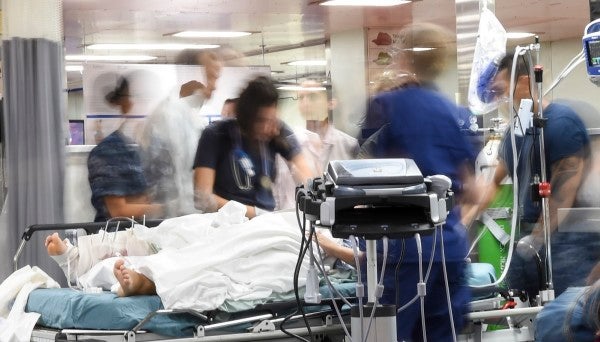 The 2020 National Defense Authorization Act would allow service members to seek compensation when military doctors make mistakes that harm them, but they would still be unable to file medical malpractice lawsuits against the federal government.

On Monday night, Congress announced that it had finalized the NDAA, which must be passed by the House and Senate before going to President Donald Trump. If the president signs the NDAA into law, it would mark the first time in nearly seven decades that U.S. military personnel have had legal recourse to seek payment from the military in cases of medical malpractice.

This proposed law is the result of a year's worth of efforts by lawmakers and Army Sgt. 1st Class Richard Stayskal, a Special Forces soldier whose lung cancer was missed by military care providers during a routine health screening. By the time Stayskal's cancer was caught, it had metastasized and is now terminal.

The amendment to the NDAA was introduced by Rep. Jackie Speier (D-Calif.) and is designed to circumvent the Feres Doctrine, a decades-old legal rule that bars members of the military from suing the government for negligence or wrongdoing.

“This is an avenue for relief for service members who have been egregiously victimized by a system of incompetence,” Speier told Task & Purpose. “And I think it'll have the benefit of holding medical professionals more accountable in the long run as well.”

In 1950, the Supreme Court ruled in Feres vs. United States that the federal government could not be held liable in the event a service member's injury or death is deemed to be “incident to service.”

The Feres Doctrine has been widely criticized for its broad application to a range of incidents, from workplace violence, to training mishaps, sexual assault, and military medical malpractice, and for creating a double standard wherein civilians can sue and service members cannot.

Over the past year, Stayskal's supporters on Capitol Hill have introduced legislation in his name in both the House and Senate that aimed to carve out a narrow exception in the Federal Tort Claims Act, which governs how citizens can sue the government. The original bills would have allowed troops to file lawsuits against the military for medical malpractice in specific cases, like those that occur at a state-side military hospital where both civilians and service members are treated.

While the final language in the NDAA is a victory for critics of the Feres Doctrine, it's different from the original legislation in one key way: Service members are still barred from suing the government in federal court.

“Was it what we started with? No, but it's a step in the right direction” Stayskal told Task & Purpose. “Next year it could be a bigger step and then the year after it could be an even larger leap.”

If passed, the amendment is expected to cost roughly $400 million over the next 10 years, members of Speier's staff told Task & Purpose.

The provision would allow claims for “personal injury or death caused by the negligent or wrongful act or omission of a Department of Defense health care provider in the performance of medical, dental, or related health care functions while such provider was acting within the scope of employment,” according to the finalized version of the NDAA.

In the event a service member is harmed, or killed, due to medical negligence, they or their family would have two years to bring a claim forward after the alleged malpractice occurs. In the case of claims that are active when the bill is signed into law, those service members or their families would have two years from the time the bill passes to bring their claims forward. Additionally, claims can only be filed for mistakes made at a “covered military medical treatment facility,” such as a stateside military hospital, or those on large overseas bases.

The bill does not extend to medical malpractice that occurs in a combat zone.

“I think this is something that can allow families moving forward, a little bit of peace of mind to know that other people still got their back,” said Rep. Markwayne Mullin (R-Okla.), who joined Democratic and Republican lawmakers in supporting the Sgt. 1st Class Richard Stayskal Military Medical Accountability Act. That House bill laid the groundwork for the medical malpractice provision in this year's defense spending bill.

'It's a way for the military to avoid its worst nightmare'

The amendment has been celebrated as a major compromise; a way to get something passed that would provide troops with a measure of legal recourse in instances of medical malpractice without opening the doors to have the military sued by its own members.

“It's been a staring contest that's gone on for decades, and anyone who is able to break that logjam I think deserves a medal,” added Fidell, who spoke before Congress on the Feres Doctrine in 2009.

Because Feres is a Supreme Court precedent, it can only be changed two ways: Either the nation's highest court could reverse its original ruling, which has yet to happen and given that the court has declined to hear recent petitions, seems unlikely; or, Congress could pass legislation, which brings us to where we are now.

The change proposed by Congress would not alter the Feres Doctrine itself. Rather, it would give troops a way around it.

“It's not opening the Feres Doctrine at all,” Mullin said of the provision in the NDAA. “That was never our objective. It has a place and rightfully so. The language that's in there has a place, but this right here, it takes it a little bit farther and makes sure we take care of those that unfortunately fall through the cracks.”

Despite the compromise, there are concerns that this step forward could lead to pitfalls down the road.

“It's a way for the military to avoid its worst nightmare of having to account to an independent branch of government when it makes a mistake,” Dr. Dwight Stirling, an Army lawyer and CEO of the Center for Law and Military Policy, told Task & Purpose.

“Military officials should be accountable to courts for everyday, non-combat related negligence,” continued Stirling, who testified before a House Armed Services Subcommittee hearing on medical malpractice and the Feres Doctrine in April. “The judicial process guarantees injured parties access to information, providing them a way to get the details about the accident or misconduct that hurt them. Internal processes run by the military do not have such guarantees and are subject to command level manipulation.”

And questions remain about how the claims process will function in practice.

For some military families who have run up against the Feres Doctrine's ban on medical malpractice lawsuits, the idea of counting on the military to investigate what went wrong, and then decide what damages to pay out, is a hard pill to swallow.

“Look at how hard it was for me to find out what happened to my son,” Suzi Way told Task & Purpose.

After Jordan Way, a Navy corpsman, went in for a routine shoulder surgery at a base hospital in December 2017, his military doctors prescribed oxycodone to help with the pain, as Task & Purpose previously reported. Despite his complaints that the drugs weren't working, the dosage was increased. Four days later he was dead. He'd taken 82 pills, as prescribed by his doctors.

Way's death was originally ruled as an overdose, but the answer didn't sit right with his parents, Suzi and Dana Way, who repeatedly questioned why so many drugs were prescribed, and demanded to know what happened in the days leading up to their son's death. After more than a year of emails, calls and desperate pleas, the Navy launched an investigation and determined that Jordan Way had not died of an overdose, but of opioid toxicity.

“Now the military's going to be responsible for telling me what they did wrong?” Suzi Way said of the proposed claims process. “They're going to exhaust people, that's what they try to do. They try to exhaust you until you just say 'I can't do it anymore.'”

'I'm hoping to see it through'

For his part, Stayskal said he sees this as a trial run: A chance to show skeptics that allowing service members to file for damages against the government won't undermine good order and discipline, erode the military's current compensation system, or open the doors to a flood of claims.

“It's not going to bankrupt the government and the military is not going to crumble,” Stayskal told Task & Purpose. “I think it's going to gain movement over time, and I think somebody else will step up for the next thing and add it to this, and it'll just be something that grows, and eventually the areas will be covered that need to be covered for military service members.”

It's still unclear whether this change could pave the way for future amendments to allow for claims on sexual assault, workplace violence, or training incidents, all of which remain barred by Feres.

“I think we need to see how this plays out,” Speier told Task & Purpose. “I'm not fearful about this program being implemented, because I think we will have the ability to offer amendments in future NDAAs, and make sure there's vigorous oversight and we'll call upon the [Government Accountability Office] to do reports and reviews.”

As Stayksal's year-long fights nears its conclusion, he remains cautiously optimistic that he, and other service members like him, will have a chance to make their case against the government:

“They're going to have more rights,” he said, before pausing to add, “no, not more rights, but the same equal rights as everybody else.”

“I'm hoping to see it through,” said Stayskal, who spends his time with his family in Pinehurst, North Carolina, when he's not on the road campaigning to get a version of his namesake bill passed into law, or at the Moffitt Cancer Center in Tampa, Florida for treatment.

“I'm excited about it,” Rep. Markwayne Mullin told Task & Purpose. “I just hope Rich is around when this bill gets signed into place.”